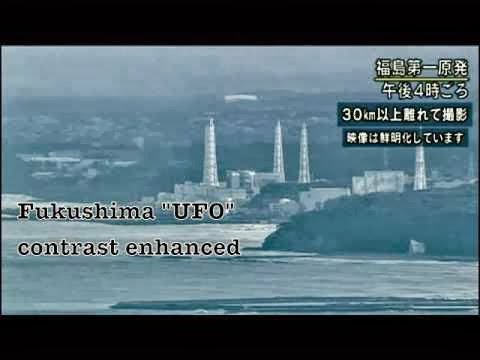 A while ago I had seen reports of a UFO over Chernobyl, but I could not find a reliable source, nor video or pictures.  I put it aside for a while, but then I decided to see what the Russian news media said about it. The Chernobyl nuclear disaster was quite a disaster - if the fourth reactor exploded, it could have wiped out the population of much of Europe, and caused much sickness and birth deformities.  I found this from the Russian news site Pravda, UFO Prevents Blast at Chernobyl Nuclear Plant:


When troublesome events started to occur, some people saw a spaceship hovering above the fourth generating unit of the Chernobyl plant. Eyewitnesses say that an UFO was there for six hours and that hundreds of people saw it. People started writing about it only two years after the catastrophe. Of course, such information appeared in magazines on ufology. As it is generally believed, serious people don’t read such magazines and journals.
Here is what Mikhail Varitsky had to say: “I and other people from my team went to the site of the blast at night. We saw a ball of fire, and it was slowly flying in the sky. I think the ball was six or eight meters in diameter. Then, we saw two rays of crimson light stretching towards the fourth unit. The object was some 300 meters from the reactor. The event lasted for about three minutes. The lights of the object went out and it flew away in the northwestern direction.”
The UFO brought the radiation level down. The level was decreased almost four times. This probably prevented a nuclear blast.
Three years later (on September 16, 1989), the fourth power-generating unit emitted radiation into the atmosphere. Several hours later, a doctor saw an object in the sky above the Chernobyl plant. Doctor Gospina described it as “amber-like.” She said she could see the top and the bottom of it as well.
In October of 1990, a reporter from the newspaper the Echo of Chernobyl , V. Navran, was photographing the machine shop of the Chernobyl plant. “I photographed the top of it, includomg a part of the hole above. I remember everything very well; I did not see any UFO. However, when I developed the film, I clearly saw an object that was hovering above the hole in the roof.” The object looked like the one doctor Gospina saw.

And there is this earlier 1997 report from NICAP:


On May 1, 1997, Jerry Washington wrote:
In response to Anders Liljegren assertion that "'the UFO phenomenon' was NOT out to check on that...No sightings in the affected area until more than a week after the nuclear crash," referring to the Chernobyl disaster, I offer this excerpt from Dr. Vladimir V. Rubtsov's lectures as published in MUFON's 1994 Symposium Proceedings:
"...about one month before the Chernobyl disaster I had a talk with an air traffic controller of the Kharkov airport. He told me that, according to pilots' reports, there was a rising number of UFO observations in the area of the Chernobyl Nuclear Power Station (ChNPS). Later it became known that on the night of the fire in the ChNPS, some 3 hours after the explosion, a team of nuclear specialists saw in the sky over the station a fiery ball of the color of brass. The witnesses estimated its diameter as 6-8 meters and its distance from the burning nuclear reactor No. 4 as some 300 meters. Just before the observation these specialists measured the level of radiation in the place where they were standing. It was measured at 3000 milliroentgens per hour. 'Suddenly two bright rays of crimson color extended from the ball to the reactor... This lasted for some 3 minutes... The rays abruptly faded and the ball slowly floated away in a north-westerly direction, towards Byelorussia. Then we again looked at our radiation monitor. It displayed only 800 milliroentgens per hour...'"

I remember hearing the reports where there was quite a threat posed to Europe and much of Russia because of the disaster, and subsequently scientists were surprised as they thought the levels of radiation should have been much higher.  Is this indeed what happened?  Chase Brandon, a 35 year CIA veteran, has an item on this in his fictional book, The Cryptos Conundrum:

"...the Soviet Union's Chernobyl nuclear power plant in Ukraine experienced an extreme spike in power output that caused a reactor to rupture, which sparked a series of explosions and sent a plume of radioactive fallout into the atmosphere. The second happened yesterday when Ukraine military radar operators reported seven blips streaking back and forth above the burning plant. Ground observers described them as smudges of intense light moving erratically. In response to the presence of unidentified craft in Soviet airspace, the military launched ten MiG-29 fighter jets."

As with a fictional work, the info is absolutely useless, but offers a clue as to a disinformation motive for his work. He adds that the UFOs fired on the jets. In all the public reports I have seen, this never happens. They move out of the way to disengage as much as possible. For high speed planes, they will sometimes fly alongside them (there are radar reports alongside witness testimony from pilots on this issue). The disinformation here is that extraterrestrials pose some kind of threat - and he uses a reported event where they may have saved many lives. As with Ronald Reagan, I bet the only way the U.S. Government will ever admit to their existence is to push the story that they pose some kind of threat to humanity as propaganda for yet another war.

Although Chase Brandon publicly stated that he saw material that confirms the Roswell crash of a UFO in 1947 indeed happened, the official story of the CIA is that they have no records - and in the answer, gave a run around, showing that their official statement is not an answer. See CIA smacks down former employee.  And there is the usual accusation that this is done to promote the book. There is a similar kind of ad hominem attack against Steven Greer of the Disclosure Project which discusses his financials, and nothing about any of the explosive testimony he has gathered. So what if they make money?  They both deserve it. Its this thing called "supply and demand" - which is something that is a part of this strange economic theory called "capitalism."  My thoughts on the book, if I had worked 35 years at the CIA, and there were no UFOs or extraterrestrials, I certainly would not have chosen that as a plot line.


"There are persistent stories in the Ukraine that the world was saved by UFOs" at the time of the Chernobyl disaster in 1986. "When the Chernobyl meltdown began to occur, witnesses saw a UFO hovering above the Fourth Generating Unit of the Chernobyl plant. The eyewitnesses say it was there for six hours and that hundreds of people saw it."
Eyewitness "Mikhail Veritsky says, 'I and other people from my (production) team went to the site of the blast that night. We saw a ball of fire, and it was slowly flying in the sky. I would say that the fireball was 6 to 8 meters (20 to 24 feet) in diameter.'"
"'There were two rays of crimson light stretching'" from the UFO "'towards the Fourth Generating Unit. The object was at least 300 meters (1,000 feet) from the reactor. The event lasted for three minutes. The lights on the object then went out, and it flew away in a northwesterly direction.'"
"Veritsky believes the UFO brought the radiation levels down and prevented a nuclear explosion."
"Three years later, on September 16, 1989, the Fourth Generating Unit emitted radiation into the atmosphere. Several hours later, a doctor saw an object in the sky above the Chernobyl plant. Dr. Gospina described it as 'amber-like' and said she could see the top and bottom of it clearly."
"In October 1990, V. Nauran, a reporter for the newspaper Echo of Chernobyl, was photographing the machine shop at the Chernobyl plant. He said, 'I photographed the top of it (ceiling--J.T.), including part of the sky above. I remember everything very well. I did not see any UFO at the time. However, when I developed the film, I clearly saw the object that was hovering above that hole in the (machine shop) roof. The object looked like the UFO Dr. Gospina saw.'"
(Many thanks to Michel Heseman and Steve Wilson Sr. for this news story.)

ANOTHER UPDATE: Here is a collection of videos from various sources, showing a fleet of UFOs over the Fukushima nuclear power plant, or in its vicinity.  It should be noted that the disaster is not over yet - Japan has to keep pumping in water to prevent an explosion, which in turn creates huge amounts of radioactive water which they must keep in storage tanks.  In the following video, commentary is in Spanish. It notes that there has been a complete media blackout in Japan concerning these UFOs: [UPDATE: yet again, video taken down by censors, see below]


Here is another Youtube video of the fleet of UFOs, as above video was taken down:

Not only that, but UFO sightings in the vicinity of Mount Fuji in Japan spiked BEFORE the tsunami hit in 2011.  Again in the following video we see a fleet of UFOs:

UPDATE (8/22/13): I just found this excellent footage of UFOs hovering around the a nuclear power plant in 2009:


UPDATE (3/16/15): Some longer footage, which states this took place over West Virginia, and that a portion of the footage was confiscated:

What the evidence shows is that more direct extraterrestrial intervention began with the explosion of the atomic bomb and the advent of nuclear power. There is a direct danger that human activity is posing towards the ecology of this planet earth.


AN EXTRATERRESTRIAL PROPHECY OF THE CHERNOBYL DISASTER

I want to point out here, that back in 1955 Orfeo Angelucci published a book called Secret of the Saucers which described his encounters with human extraterrestrials. They made use of flying saucers, as well as cylindrical mother ships as seen in the video above concerning Fukushima. This group was spiritually advanced, and at one point showed him the future - they specifically mentioned the year 1986 as a decision point for humanity:


Suddenly, terrifyingly, to the right of the planet Earth, appeared the red, dot of cosmic doom. Rapidly it increased in size leaving behind it a fiery tail of flame. It was evident that the comet was being drawn irresistibly toward Earth. Neither Lyra nor Orion spoke, but a strange voice said: "In the Time Dimension of Earth it is now the year 1986."I shuddered and waited anxiously, but the portentous scene slowly faded from the screen. I turned excitedly to Orion. "But what happens to Earth?"Orion and Lyra both looked compassionately at me as Orion gently replied. "That depends entirely upon your brothers of Earth and their progress in unity, understanding and brotherly love during the time period left them between the so-called now and the year 1986. All spiritual help possible will be given them, not only by ourselves but by others from all parts of the universe. We believe that they and their world will be saved, but in no time frame, or dimension, is the future ever written irrevocably. If they bring upon themselves self-destruction of their planet through a preponderance of evil there, it will mean another fall for the entities of Earth into even denser meshes of materiality and unreality. As you love your brothers of Earth, Orfeo, fight to your dying breath to help them toward a world of love, light and unity."

This was published back in 1955 - see the blog post Extraterrestrial Contact in 1952: the Case of Orfeo Angelucci for more details on this. Just as in the movie Inception, these extraterrestrials had the ability to enter other people's minds.