The Spiritual Meaning of the "Lamb slain from the foundation of the world" (Rev. 13:8) 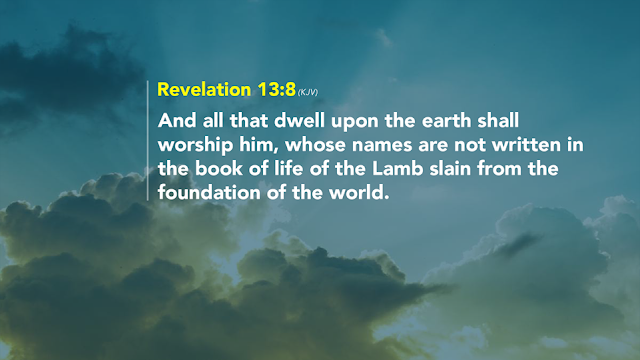 It is true that Jesus came to save the world, that He is God incarnate in human form, who needed to come to this planet to open the way again between heaven and humanity.  The Lord came at the end of the Jewish dispensation, when the Jewish religion was nothing more than a superficial hypocritical religion, where the Jews regarded themselves as superior to others and only expected a Messiah that would allow them to rule over others. But from the beginning Jesus was misunderstood, and over the centuries Christianity has become so corrupt that there is very little of the original message, and it has been corrupted by falsehoods. And when Christianity became so corrupt that it was at its final state, in the 18th century a heavenly revelation was given to Emanuel Swedenborg to restore its state to its original intended form. And this is the fulfillment of the prophecy of the Second Coming

The two essential truths that have become corrupted and falsified in modern Christian churches, which the general public is unaware of, are as follows:
In place of this, modern Christian churches have supplanted Christianity with a form of tritheism in a belief of three persons, where they have no idea which person they should pray to when they pray. Although they claim to be monotheistic in the mouth, in their mind there is a tritheism of three personal beings. And instead of focusing on doing good in one's life, the focus is on "faith" which is again misinterpreted as belief alone (it in fact means, living by the truth). Instead of repentance the false theology of vicarious atonement is taken to mean that sins are merely removed by a confession in a belief statement. In its worst form, false Christianity is nothing more than an external appearance used to hide one's hidden evils. This is the false religion of the Antichrist, foretold in the book of Revelation as a false tritheistic idol that makes itself appear to be Christian (see The Prophecy of the Dragon, the Beast, and the False Prophet).

The book of Revelation is a revelation of how the Christian churches would become utterly corrupt in its end. Anyone can see historically how the churches suffered not only from early heresies but what exactly was true about Jesus, beginning especially in the fourth century beginning with the Council of Nicea. But that this was foreseen in the Bible can be shown from the interpretation of Revelation 13:8, which has also not been understood:


And all that dwell upon the earth shall worship him, whose names are not written in the book of life of the Lamb slain from the foundation of the world. (Rev. 13:8)

It is known to many that the "Lamb" represents Jesus, for a lamb represents innocence, the highest form of good. But unknown to many is this: the Lamb represents how Jesus made His very human form Divine. And this Divine Human is the Son, not a separate personal being as is so often told in a lie that no one understands. In Jesus there is a Holy Trinity of soul, body and spirit. A Trinity of three persons is a fiction, an idol that has entered the most Holy of holies of the churches, misleading many and causing those who have any rational thought to leave the church as naturalistic atheists.

The other portion of this text that is misunderstood is that "slain from the foundation of the world" is taken to mean that this refers to the pre-existence of Christ before creation. Jesus did pre-exist as God before creation, as all of creation was created by the Divine truth or the Word, and Jesus is the "Word made flesh" (John 1:14). But this is not the meaning of the text: the "foundation of the world" is not the beginning of creation, it refers to the foundation of the Christian church, for throughout scripture the words "earth" and "world" do not refer the physical globe of the earth or creation but rather to the church itself.

The King shall say to them on the right hand, Come, ye blessed of My Father, inherit the kingdom prepared for you from the foundation of the world (xxv. 34).

The Lord is not acknowledged when His Divine in His Human is not acknowledged, for the reason that the Lord is not then regarded as God, but only as a man, who is not able to save. And although it is believed from the Athanasian Creed that the Lord is the Son of God born from eternity, and that His Divine is equal to the Divine of the Father, yet (since they separate His Human from His Divine) they divide the Lord as it were into two persons, which they call natures, making the Lord one thing as the Son of God from eternity, and another as the son of Mary. And because they so divide the Lord no one is able to approach Him unless he is willing to approach Him as one person when regarded as God and as another when regarded as man. Such has been the idea of the Lord from the first foundation of the church, as can be seen from the writings of the fathers, and afterwards from the writings of their sons. The Lord has been thus divided in the church from its beginning, because they did not understand the Word. For where the Lord mentions the Father it is believed that a Divine distinct from His Human is meant, although it is clearly evident in Matthew and in Luke that the Lord was conceived by the very Divine which is called the Father, consequently that this very Divine is in His Human as a soul is in its body; and the soul and the body are one Person. And what is wonderful, this is taught in express terms in the Athanasian Creed, which is the doctrine concerning God in the whole Christian world, and yet scarcely any one in that confession gives any heed to it." (Apocalypse Explained, n. 807).

I decided to write this because of this coronavirus pandemic: it is causing many of these old churches to shutter and close down, and many will not survive the financial losses they experience.  And that, my friends, can be a very good thing. For the old churches must die in order for the New Church to be reborn anew. This coronavirus pandemic is going to change many things in this world, and it is my prayer that this will be one of them.
Posted by Doug Webber at 1:53 PM 1 comment: