The Irrational Logic of a Trinity of three persons 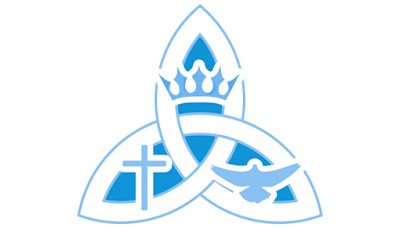 The true Trinity of Christianity is the Divine itself, the Divine Human, and the Divine proceeding, which is the soul, body and spirit of Jesus Christ, who is Jehovah in human form. That the apostles understood this, can be seen that they understood that the name of the Father, Son and Holy Spirit is Jesus Christ, and are recorded in the book of Acts as having baptized in the name of Jesus. Moreover, of Jesus Paul said,


For in him dwells all the fullness of the Godhead bodily. (Col. 2:9)

And the Holy Spirit is the spirit that proceeds from Jesus, it is not a separate distinct person:

And Jesus denied that the Father was someone separate from Himself, and those who think this, do not know who Jesus is:

For Father and Son are one just as the soul and body are one in each person.

Here is Swedenborg's account of what he saw concerning those who believed in a trinity of three persons in the spiritual world.  Although written over 250 years ago, people still follow the same irrational logic from a doctrine invented by men invented in the fourth century A.D., which was not taught in the original Christian Church.  As it is is irrational and illogical, it is an indefensible teaching, with one falling into undefined words and unable to define what "one God" really is. It is unmistakenly a form of tritheism:


I saw some new comers from the natural world into the spiritual, talking together about three Divine Persons from eternity; they were dignitaries of the church, and one of them a bishop. They came to me and after some conversation about the spiritual world, of which they had before known nothing, I said, "I heard you talking about three Divine Persons from eternity; and I beg you to open to me this great mystery, according to your ideas which you conceived in the natural world from which you have lately come."

Then the primate looking to me said, "I see that you are a layman, and so I will open the ideas of my thought concerning this great mystery and teach you. My ideas have been and still are that God the Father, God the Son, and God the Holy Spirit, sit in the midst of heaven, upon lofty and magnificent seats or thrones — God the Father upon a throne of the finest gold, with a sceptre in His hand; God the Son at His right hand upon a throne of the purest silver, with a crown on His head; and God the Holy Spirit near them upon a throne of brilliant crystal, holding a dove in His hand: that lamps hang round about them in triple order, glittering with precious stones; and that at a distance from this circle stand innumerable angels, all worshipping and singing praises: moreover, that God the Father is continually conversing with His Son about those who are to be justified and that they together decree and determine who upon earth are worthy to be received by them among the angels and crowned with eternal life; and that God the Holy Spirit, having heard their names, forthwith hastens to them over all parts of the earth, bearing with Him the gifts of justice, as so many tokens of salvation for those who are to be justified; and as soon as He arrives and breathes upon them, He disperses their sins, as a ventilator disperses the smoke from a furnace and makes it clear; and also He takes away from their hearts the hardness of stone, and puts into them the softness of flesh; and at the same time He renews their spirits or minds, and gives them new birth, inducing upon them childlike faces; and at last marks their foreheads with the sign of the cross, and calls them the elect, and children of God." The primate, having ended this statement, said to me, "Thus I unravelled this great mystery in the world; and because most of our order there applauded these my opinions, I am persuaded that you also, who are a layman, give them credence."

After these things were said by the primate, I looked at him, and at the same time at the dignitaries with him, and observed that they all favored him with their full assent. Then I began to reply, and said, "I have considered the declaration of your faith, and have gathered from it that you have conceived and still cherish a merely natural and sensual, yea, material idea concerning the triune God, whence inevitably flows the idea of three Gods. Is it not to think sensually of God the Father that He sits upon a throne with a sceptre in His hand? and of the Son that He sits upon His throne with a crown on His head? and of the Holy Spirit that He sits upon His with a dove in His hand, and according to what he hears, He runs throughout the world? And because such an idea thence results, I cannot give credence to what you have declared; for from my infancy I have not been able to admit into my mind any other idea than that of One God; and since I have received and still retain only this idea, all that you have said falls away with me. And then I saw that, by the throne upon which, according to the Scripture, Jehovah is said to sit, is meant kingdom; by the sceptre and crown, rule and dominion; by sitting on the right hand the omnipotence of God by His Human; and by those things which are related of the Holy Spirit, the operations of the Divine omnipresence. Assume, sir, if you please, the idea of One God, and revolve it well in your reason, and you will at length clearly perceive that it is so. Indeed, you also say that there is one God, and this because you make the essence of those three persons one and indivisible; yet you do not allow any one to say that the one God is one Person, but that still there are three; and this you do, lest the idea of three Gods, such as yours is, should be lost; and you also ascribe to each a character distinct from that of another: do you not thus divide your Divine essence? Since it is so, how can you at the same time think that God is one? I could overlook it if you should say that the Divine is one. When any one hears that the Father is God, the Son is God, the Holy Spirit is God, and that each Person singly is God, how can he conceive that God is one? Is it not a contradiction to which no one can give credence? That this cannot be called one God, but like Divinity, may be illustrated by these examples. It cannot be said of several men who compose one senate, synod, or council, that they are one man; but while they hold all and each one opinion, it may be said that they think one thing. Neither can it be said of three diamonds of one substance that they are one diamond, but that they are one as to substance; and also each diamond differs from the others in value, according to its own weight; but it would not be so, if they were one, and not three. I perceive, however, that the reason why you call the three Divine persons, each of whom by Himself or singly is God, one God, and why you insist that every one in the church should so speak is, that sound and enlightened reason throughout the whole world acknowledges that God is one; and therefore you would be covered with shame if you also should not speak so. But even while you utter one God, though you think of three, still the shame does not keep the words within your lips, but you speak them out."

After this had been said and heard, the bishop retired with his clerical attendants, and in retiring he turned about, and wished to exclaim, There is one God, but could not, because his thought drew back his tongue; and then with open mouth he breathed out, Three Gods. Those who were standing by laughed aloud at the strange sight, and departed." (True Christian Religion, n. 16)

And in another dialogue, one can see how there is an internal contradiction when defining the word "person":


"What do you mean by Person, and what does the word signify?" And they said, "The term Person signifies not a part or quality in another, but what subsists by itself. Thus do all the Doctors of the church define Person, and we agree with them."

And I said, "Is this the definition of Person?" And they replied, "It is." To which I answered, "Then there is not any part of the Father in the Son, nor any of either in the Holy Spirit; whence it follows that each has His own judgment, right, and power; and so there is not any thing which joins them together except the will which is proper to each, and thus is communicable at pleasure: are not the three persons thus three distinct Gods? Further, you have also defined Person, that it is what subsists by itself: consequently there are three substances into which you divide the Divine essence; and yet this, as you also say, is incapable of division, because it is one and indivisible; and moreover to each substance, that is, to each Person, you attribute properties which are not in another and cannot be communicated to another, such as imputation, mediation, and operation; and what else thence results than that the three Persons are three Gods?" (True Christian Religion, n. 17)

There is no "mystery" here.  It is a false teaching that is inherently a self contradiction. Should we follow a mysterious "essence" that is not understood, or should we follow a person, Jesus Christ? Is not true Christianity a personal relationship with Jesus Christ?
Posted by Doug Webber at 11:11 PM No comments: