The Dream Prophecy of the Coronavirus Pandemic and Biden's Inauguration

I noticed something rather unusual in the news today, and it is related to a clairvoyant dream which is described in detail in the book, The X Prophecy published in June 2019. I would later discovered that it predicted the outbreak of the global coronavirus pandemic (see A Clairvoyant Dream and Prophecy of the Coronavirus Pandemic, as well as The X-Men Prophecy of the Coronavirus Pandemic). It is based on a dream where a young girl goes to a white castle on a hill that represents the Slavic myth of paradise.  In the castle she sees a shallow pool, and out of the pool these flag poles rise, and these flag poles are grave markers of the dead. One flag pole in particular represents the grave of Elena, and this represents a story found in the X-Men comic books of one named Illyana.  Illyana dies of a virus that affects her lungs so that she cannot breathe. This virus, called the "Legacy Virus," eventually becomes a global pandemic.

The book was written, of course, without any knowledge that COVID-19 was about to break out at the end of 2019. I have left it unmodified since it was first published. Here is the relevant passage of interest, which has multiple levels of meaning as described in the book:

"...in the another version of the dream she flung herself and landed on the roof of the castle, and landed on a platform knee deep in a pool of water that was on the roof of the castle. In the pool of water there were submerged flag poles. She is greeted again by two female stork guards and they ask her who she is and why she has come, as she must have a reason to be in the white castle. She then said she is a descendant of someone with many vowels in her name and they ask, “Do you mean Elena?” The name Elena was a shortened version of the name and she thought it should have been spelled as “Helena.” The stork people then surround her and raise their spears to the sky to celebrate that a descendant of Elena has come."

There were multiple flag poles, and the dreamer said that they represented grave markers. There was a lot of Russian symbolism, and the symbolism was pointing to events that took place in Ukraine in the 16th century, which began to repeat in our present time. A subsequent passage says this:

"[The dreamer] had said Elena died a long time ago, so perhaps the grave marker of Elena represented Helena of Moscow who had died in the 16th century. Thus the dream was indicating that present day Russia and Ukraine were repeating events that had happened long ago."

The dream showed scenes from the X-Men movies and comics, but Elena here is the X-Men character Illyana, who dies of a virus that affected her lungs, as "Elena" and "Illyana" are two ways to spell the same name.

Today, I saw this scene in preparation for the inauguration of Joe Biden, our next President (from Nearly 192,000 American, state flags on display at National Mall ahead of Biden inauguration): 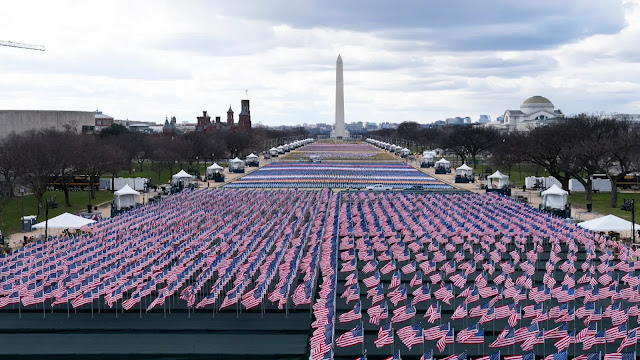 The American flags represent the Americans who cannot attend due to the COVID-19 Pandemic.  And they also represent the sheer number of people who have died of COVID-19.  The flags are thus grave markers. This, of course, is next to the Lincoln Memorial reflecting pool, which as in the dream is very shallow: 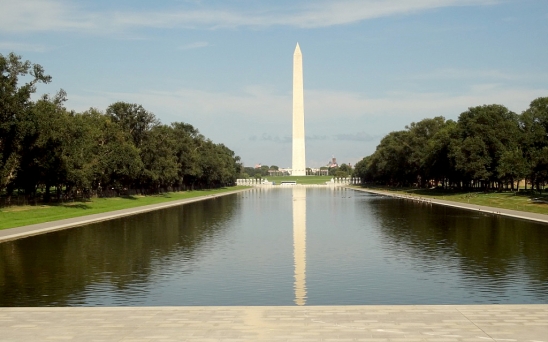 The book, The X Prophecy (published in 2019) focuses on some other symbolism involving Russia and Ukraine: in the 16th century, Russia began taking over the territory of Ukraine, which repeated in events beginning with the Russia Ukraine conflict in 2014. So what does this have to do with the upcoming Biden Presidency? The answer to that is obvious by now: there was some recent propaganda concerning Ukraine which some tried to use to take down Biden, and Russia, of course, was involved in interfering in the 2016 election.

When I saw the image of the flags this morning, it was just too unbelievable. When we look at it, let it be a reminder to all to those who have died from this pandemic. Just now, Biden held a memorial service at the Lincoln Memorial in memory of those who have died. 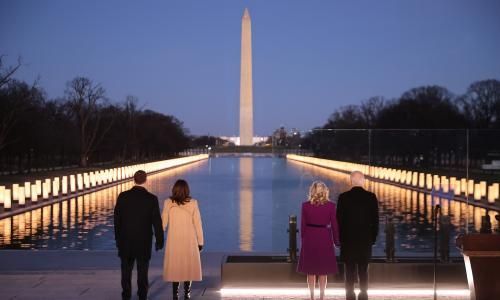 Biden and Harris hold a memorial service. See Joe Biden holds memorial for 400,000 Americans who have died of Covid-19
Posted by Doug Webber at 11:28 PM No comments:

A Clairvoyant Dream of the Storming of the Capitol

We now have seen the result of an endless propaganda stream from social media that influenced how people behave, by believing in something utterly false. I spoke about this earlier in the post: CIA Mind Control over American and Foreign Media. However now the falsehoods stem mainly from dark corners of the internet and social media, as well as from a leader who has shown obvious signs of narcissism and anti social personality disorder. Let us hope we can use the internet to spread the truth, not lies or falsehoods. Always, check the facts, something is not true just because someone told you so, or on trumped up charges which have no basis in reality.

Here is Mitch McConnell's speech, right before the capitol was stormed by a mob. One of his best speeches I have seen:

The night before, a young child I know had a dream in which people with guns had invaded a building by breaking through a secure door.  This building was in a city south from us and involved a girl that was born in Virginia. Most people escaped, but she had a gun pointed at her and struggled with the person holding the gun (one woman died who broke in). In the next scene, she is held hostage in a classroom and she is given a boring assignment to count and read cards (she had no idea electoral votes were being counted on January 6). She got so bored of it she got two other girls to join her to stop reading the cards and start a revolution, and gave a moving speech about a tribe of "jerks" who came from the west. One of the girls, oddly enough was called "banana" and even looked like one. This of course would represent the senators who objected to some of the electoral counts. Let us hope that from henceforth we will have elected officials who will show more backbone than a banana.