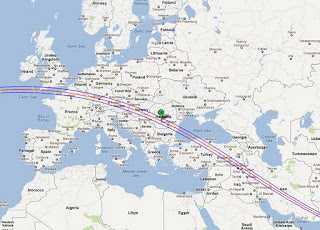 There are at least two other instances where a solar eclipse was used to not only date a future event, but also the eclipse was used to determine the geographic locality. Quatrain 5:93 made use of an eclipse where the central longitude of the path of the eclipse passed near Scotland in the year 1600, and quatrain 3:77 made use of another solar eclipse whose central longitude was close to the location of the capital of Persia. As with this quatrain, quatrain 3:77 also mentioned the year of the eclipse, which was the year 1727.
Serbia had invaded Kosovo to combat terrorists, and America led a massive aerial assault against Serbia. America is thus the “great King of terror” that descends from the sky. The quatrain states in the last line “Before and after, Mars to reign by good luck” which means that there will be war before and after the year 1999. This was fulfilled by the former war in Bosnia and Croatia, and the subsequent “War on Terror” on Afghanistan and Iraq that began after September 11, 2001. America here is the great King of terror that descends from the sky as it took advantage of acts of terrorism to help further its goals in Iraq, which had nothing to do with the attack of September 11. Between the Gulf War of 1990 and the Second Gulf War of 2003, America, England and France had enforced no fly zones over northern and southern Iraq. A portion of Iraq falls under the path of the eclipse of 1999. The quatrain states that this “King of Terror” will “revive the great King of Angoulême.” In addition to this being a reference to Alaric I of the Visigoths, this could also be a reference to King John of England. In the year 1215 King John was forced by the Barons to accept and sign the Magna Carta, which limited the power of the king and guaranteed the rights of free men under the law. The Magna Carta is recognized in history as an important step towards rule by constitutional law. In opposition to this and in reaction to the attack of September 11, in 2002 the U.S. government enacted the U.S. Patriot Act, which has been criticized by civil libertarians for infringing on the privacy rights of individuals and allowing for the arbritrary arrest and indefinite detainment of non-citizens suspected of terrorism.
Posted by Doug Webber at 10:59 PM No comments: