A Prophecy of the Pandemic and the War in Ukraine 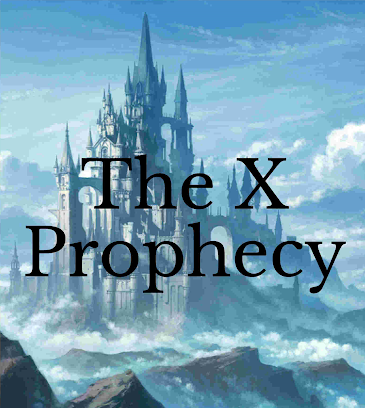 In June of 2019 I published a book, The X Prophecy, of a highly symbolic dream which contained many symbolic clairvoyant meanings, as it gave knowledge of things that were unknown to the dreamer.  Since then, I discovered it contained an explicit warning of the upcoming COVID-19 pandemic which broke out months later that year. The indication from the dream is that this coronavirus was man-made, designed to target a certain segment of the population, and there is evidence to support that. For a recap, see the following blog posts:

As it was published before the outbreak of the pandemic I have decided not to update the book and keep it in its original form, and instead just post updates to it on this blog.  There were many odd features of the dream, and many which stood out were symbolic references to Russia and Ukraine. I surmised at the time it had something to do with the Russian invasion of Crimea which took place in 2014. But now with the full blown invasion of Ukraine by Russia, the warning in the dream is now quite clear.

In one segment of the dream a grave is shown on top of a castle, which is the grave of someone named Elena who had died long ago. This grave of Elena has multiple meanings, and one of them pointed to Queen Elena of Moscow, who lived in the 16th century. She married the Grand Duke of Lithuania, and at that time the Grand Duchy of Lithuania covered the modern territories of Lithuania, Ukraine and a part of Russia, as can be seen in the following map which is also shown in the book: 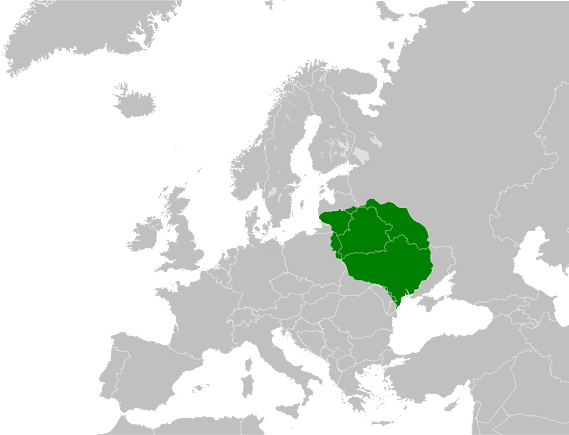 And in the book (back in June of 2019) I wrote this of Queen Elena of Moscow:

"She was said to be the uncrowned Grand Duchess of Lithuania and the uncrowned Queen of Poland since she refused to convert from her Orthodox faith to Catholicism. Her marriage was used as a pretext to renew the Muscovite–Lithuanian Wars in 1500 which ended in 1503 but the Grand Duchy of Lithuania had lost about a third of its territory... Before these wars the Grand Duchy of Lithuania was in control of the Kievan Rus’ territories. Following a series of wars in the 16th century, the Duchy of Moscow expanded their territory west annexing many of the Rus’ lands. Kievan Rus’ was a loose federation of Eastern Slavic and Finnish states and at one time their capital was at Kiev, the capital of modern Ukraine which is the territory north of the Black Sea. The conflict between the Duchy of Lithuania and the Duchy of Moscow in the 16th century over the lands of Kievan Rus’ is being repeated as of this writing in the conflict between Russia and Ukraine."

If we look at the first battle in the Muscovite–Lithuanian Wars in 1500, Moscow invaded from the north through what is now known as the country of Belarus, heading south but not quite reaching Kiev. Here is a map of the campaign of the war in 1500: 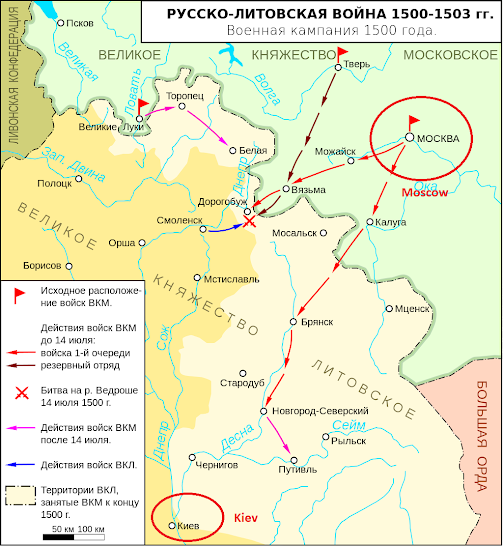 This was repeated again in February 2022 in the Russian invasion of Ukraine, where several columns advanced from the north toward Kiev, as well as other areas to the east and south (keep in mind the book was published in June of 2019). The following map shows the course of the invasion from February to April of 2022:

In the dream, there were symbolic depictions of the Slavic myth of paradise, the realm of the souls of the dead (the dreamer had no knowledge of any Slavic myths or legends). In the end the interpretation is clear: it predicted the deaths of many from the coronavirus pandemic, and now from the Russian-Ukraine war, as sadly they are both the same people of Slavic descent. But we should of course call this Putin's war, as the majority of Russians don't even support it. The war is for the sake of power, money and Ukraine's natural resources (see Russia’s Resource Grab in Ukraine), and Putin's inner circle of oligarchs have moved the riches of Russia into offshore assets (see THREE DOZEN TYCOONS MET PUTIN ON INVASION DAY. MOST HAD MOVED MONEY ABROAD). Corruption is so rife from top to bottom many can now see it in how just badly the Russian military is performing. The reason for wars is to expose evil for all to see:

"It is not from the Divine Providence that wars should exist, for they are united with murders, plundering, violence, cruelty, and other enormous evils, which are diametrically opposed to Christian charity; but still they cannot but be permitted, because man's life's love since the time of the most ancient people meant by Adam and his wife has become such as to desire to rule over others, and at length over all, and to possess the wealth of the world, and at last all wealth. These two loves cannot be kept bound, since it is according to the Divine Providence for every one to be allowed to act from freedom according to reason; and without permissions man cannot be led from evil by the Lord, and so cannot be reformed and saved; for unless evils were permitted to break out, man would not see them, thus would not acknowledge them, and so could not be led to resist them. Hence evils cannot be repressed by any Providence; for so they would remain shut in, and like the diseases called cancer and gangrene would spread and consume all that is vital in man. For man is from birth like a little hell, between which and heaven there is perpetual variance. No man can be withdrawn from his hell by the Lord, unless he sees that he is there, and unless he wishes to be led out; and this cannot be done without permissions, the causes of which are laws of the Divine Providence" (Angelic Wisdom concerning Divine Providence, n. 251).

"The Lord never began the combat with any hell, but the hells assaulted Him; as is also the case with every man who is in temptation, or in combat with evil spirits. With the man the angels do not make the assault, but always and continually the evil or infernal spirits; the angels only ward off and defend. This comes from the Lord, Who does not wish to bring evil upon any one, or to thrust him down into hell, even if he were the worst and the most bitter enemy of all; but it is he who brings the evil upon himself, and precipitates himself into hell. This also follows from the nature of evil, and from the nature of good. It is the nature of evil to wish to trouble every one; it is the nature of good to wish to trouble no one. The evil are in their very life when they are assaulting; for they continually desire to destroy. The good are in their very life when they are assaulting no one, and when they can be of use in defending others from evils." (Heavenly Arcana, n. 1683)

We should all pray for peace in Ukraine, and support the defense of the good against any and all evil. 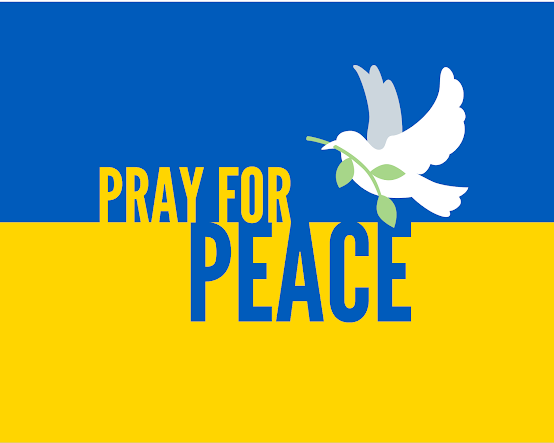 Posted by Doug Webber at 9:47 PM No comments: