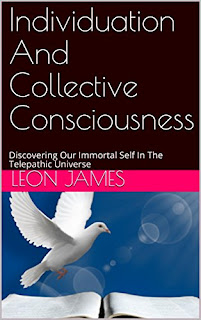 I was sent a free copy of a book, Individuation and Collective Consciousness, which offers an interesting and detailed comparison between Carl Jung and Emanuel Swedenborg. This comes from the perspective of a psychologist and university professor who evidently discovered that Jung's psychological concepts have direct parallels with the heavenly revelations given to Emanuel Swedenborg. This I already knew: Jung was interested in psychic phenomenon and was directly familiar with Emanuel Swedenborg. However Jung did not attribute his ideas to Swedenborg, as the psychological community is averse to anything spiritual to explain psychological concepts. As Swedenborg had visions of heaven and hell, this immediately presents a problem to the scientific community that follows a philosophy of naturalism and only considers what is physical as "real." The author himself seems to have encountered this aversion to spiritual ideas which are immediately rejected and/or marginalized. This perhaps Jung knew, so Swedenborg is never mentioned, and in many cases Jung  invented his own new vocabulary to describe the spiritual psychology that was revealed to Swedenborg in heavenly visions.

I can see this work being used in a group study or discussion. The work jumps into the theology and visions of Emanuel Swedenborg to compare them with Carl Jung. To those who are familiar with the writings of Emanuel Swedenborg, this is not an issue, but if someone is being introduced to the revelations and visions of Swedenborg for the first time they may first need an introduction to certain concepts. For example, most people assume we cease to exist upon death, and are not aware there is an afterlife plane of reality that interacts with ours and directly influences our behavior. Also Swedenborg discusses how all of heaven is in the form of a Grand Human which is foreign to most people, except those who are familiar with the New Testament which states we are all part of one body. However most will only take that as a figurative statement; only in the visions of Swedenborg is this strange concept explained in detail. Since these concepts are not introduced, reading this work in a group will immediately provoke discussion and that is perhaps the author's intent. The author does however explain these concepts later in the work.

Carl Jung uses the term "individuation" to describe the process of personal growth; this is known in Christianity and in Swedenborg's writings as the process of spiritual regeneration. But where Jung and Swedenborg merge together the most is in Jung's concept of universal archetypes; this was probably directly borrowed from Swedenborg's concept of "correspondences" - where every object in the natural world corresponds with a universal concept in the spiritual world. This symbolic correspondence is universal, and this system was used in composing the Bible. Swedenborg says every state of the will and thought corresponds to a universal spiritual idea, and Jung says the same thing except he calls it an archetype. What Jung and psychologists call the mental aspect of the psyche is known to Swedenborg as one's spiritual soul which resides in a heavenly plane. In short, much of Jungian thought and modern psychology is divorced from God and its spiritual roots.

The author at times uses his own terminology, or psychological background, to describe certain spiritual concepts that differ from how it was described in Swedenborg's writings. For example, man before the fall is described in this work as having "dual consciousness" which is defined as being both in the "natural mind" and "rational mind." This differs from the psychology of the soul as described by Swedenborg - the lowest part of the mind is the natural, composed of the senses and knowledges. The middle is the rational, and the upper mind is spiritual. Man before the fall had direct communion with angels and spirits as the mind was open between the spiritual and natural; the rational mind is simply the medium. There are three levels to the mind or soul and very few are aware or pay attention to the Divine influx that comes in through the highest region; this flows downward through the rational mind and this influx we also describe as "intuition" or "conscience." Swedenborg describes in detail how the rational mind can become "inverted" when it looks down to natural things or succumbs to lower desires. In other words, after the fall of man we did not lose the rational mind, just that the spiritual influx into the rational mind became cut off and we became "inverted," looking towards the love of self rather than towards God.

The author makes an interesting parallel between Jung's concept of the "collective unconscious" and Swedenborg's visions of the afterlife. In Jungian psychology, the "collective unconscious" is a part of the unconscious mind that is derived from common ancestral memories, which explains things such as common symbols and myths found throughout the world. Swedenborg has a more direct spiritual explanation. The higher region of the mind is directly connected to a higher spiritual plane, where we are directly associated with a spiritual society that influences our personality traits and behaviours. It is through this spiritual society that some may have access to "past life memories." In ancient times this was taken as evidence of reincarnation, but Swedenborg saw that this was due to us sharing the memory of a life experienced by an angelic spirit similar to our own personality. Jung divorced himself from these spiritual explanations and described everything in terms of the mind in order for the ideas to be accepted in modern day psychology. This spiritual connection with our mind is suppressed and denied, but understanding it can help us understand how to spiritually grow and face our problems head on.

The work is large, I found it interesting to see a Jungian view on the theology and revelations of Emanuel Swedenborg. While describing Jung's views of psychology, I found myself wanting to go back and reference Swedenborg to see how Jung's view of the "ego" compared with what was revealed to Swedenborg concerning our "self." The words "ego" and "self" to me are too general; the revelations given to Swedenborg show how our soul has several layers or degrees, from the outermost body and its senses, to the rational mind, and then finally to the higher region of the soul that receives spiritual influx from the spiritual world.

This is my first impression of the book, I have not had time to finish it but like Swedenborg's works its not the kind of book one reads once and puts it away, this is one where little sections need to be read, studied, and thought over carefully.
Posted by Doug Webber at 5:44 PM