The Spiritual Meaning of the Serpent in the Garden of Eden 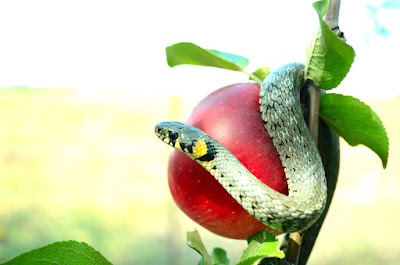 The story of Adam and Eve, and their fall by the serpent in the Garden of Eden is still treated as a literal story by many literalists and creationists, causing many to discount Christianity as a whole. Literalists fail to understand a symbolic allegory when presented with one, and indeed will vehemently deny it when presented with that view. In the New Church view, the first 11 chapters of Genesis is written in the form of an allegory, and true history only begins with the 12th chapter of Genesis. Many still believe that the serpent of the Garden of Eden was an actual talking snake, although the Catholic Church has officially moved away from that view and regards the serpent as allegorical.

So if the serpent of the Garden of Eden is an allegorical symbol, what does it symbolize? The most simple answer is that it is simply the personification of evil, and some would go further to say it is a personification of the devil or Satan. However in the revelations of the New Church, there is no individual devil or Satan - hell as a whole is called the devil and Satan. And the origin of evil is man himself from the abuse of the free will he has been given. An individual devil or Satan is a later belief that came as part of tradition, and perhaps the early influence of the Zoroastrian religion from ancient Persia.

The spiritual meaning of a serpent is one who withdraws from heavenly things towards things of the senses and this world. Those who withdraw from their core spirituality towards external material things are called serpents, because serpents crawl on their belly closest to earth, and do not walk upright like men which signify those who live a spiritual life. Those who withdraw from their spirituality and fall into their lower natural desires are represented by beasts, and as the serpent is the lowest it represents those who depend and follow their external senses to the denial of everything else:


"The Most Ancient people did not compare all things in man to beasts and birds, but called them so. Such was their language. Such also it remained in the Ancient Church, after the flood; and similar language is preserved in the Prophets. The things of sense with man they called serpents; for just as serpents are next to the earth, so are things of sense next to the body. Reasonings from things of sense concerning the mysteries of faith, they therefore called the poison of the serpent; and the reasoners themselves they called serpents. And because these reason much from things that are of sense, or visible — as are things earthly, corporeal, worldly, and natural — it is said 'the serpent was subtle beyond every wild animal of the field.'" (Heavenly Arcana, n. 195)

Thus those who state that the serpent represents Satan before his fall are mistaken, and those who believe in an actual serpent in a Garden are deceived by an extreme literal interpretation of scripture. The serpent represents those who only believe in what they receive from their senses. And in modern times, it is worse, where the philosophies of naturalism and materialism prevail, and it affects our way of thinking:


"In ancient times they were called serpents who had faith in things of sense rather than in things revealed. At this day it is still worse; for there are not only those that believe nothing but what they see and feel, but those who confirm themselves by deductions of science unknown to those of most ancient time, and thus blind themselves to a much greater degree. That it may be known how they blind themselves who form conclusions respecting heavenly things from things sensual, scientific, and philosophical, so that they then see and hear nothing at all, and are not only deaf serpents but also flying serpents, which are much more destructive" (Heavenly Arcana, n. 196)

Thus, with this understanding, the "seed of the serpent" represents all belief which comes from arguing from the senses, and the "head of the serpent" is the dominion of evil whose power was destroyed when God chose to become incarnate in human form to fight directly against the hells. So what about the serpent being cursed, so that it was now forced to crawl on its belly? Again it is symbolic:


"That the serpent should go upon his belly means that the sensual could no longer look upward to heavenly things, as before, but looked downward to things corporeal and worldly, is evident from the fact that in the ancient time by the belly were signified things nearest to the earth, by the breast, those that are above the earth, and by the head, those that are highest. So here, the meaning is that the sensual, which in itself is the lowest of man, should go upon its belly, because it turned itself to what is earthly... Therefore when man looked to heavenly things it was said that he walked erect, and that he looked upward or forward, which is the same; and when he looked to corporeal and earthly things, that he was bowed down to the earth, and looked downward or backward." (Heavenly Arcana, n. 247-248)

This is why, in many ancient religions and customs, people would bow down to the earth before God, acknowledging their natural lowness and that heavenly things were higher than the things of the self or one's ego. That this signifies a withdrawal from communion with heaven, can be seen in the book of Revelation where Jesus declares that the "tree of life" is present in paradise or heaven (Rev. 2:7).

With this understanding, to become more spiritual one must learn how to withdraw one's desires from material things, and even to withdraw oneself from the senses:


"Unless man's thought can be elevated above sensual things, so that these are beheld as below him, he cannot understand any interior thing in the Word, still less such things as are of heaven abstracted from those which are of the world; for sensual things absorb and suffocate them. It is for this reason that those who are sensual and have zealously devoted themselves to mere outward knowledges, rarely apprehend anything of the things of heaven; for they have immersed their thoughts in such things as are of the world, that is, in terms and distinctions drawn from them, and thus in sensuals, from which they can no longer be elevated and so be kept in a point of view above them..." (Heavenly Arcana, n. 5089)

There are several external means for withdrawing from the senses:


Each physical sense corresponds to something internal:

One's external senses of the body must be brought under control in order to become more spiritual:

One first becomes introduced to spiritual matters through means of knowledges, but the goal is to become elevated above mere natural knowledges to more internal spiritual things by living by the truth:


"The regeneration of the natural is effected by the instilling of spiritual life by the Lord through the internal man into the knowledges therein. This instilling has been treated of in this chapter. But when man is thus far regenerated, if he be such that he can be further regenerated, he is elevated thence to the interior natural, which is under the immediate auspices of the internal. But if the man is not such, his spiritual life is then in the exterior natural. The elevation is effected by a withdrawing from what is of sense and outward knowledge, thus by elevation above them, and then the man comes into a state of interior thought and affection, thus interiorly into heaven." (Heavenly Arcana, n. 6183)


Behold, I give unto you power to tread on serpents and scorpions, and over all the power of the enemy: and nothing shall by any means hurt you. (Luke 10:19)

This means, in the spiritual sense, that those who live a spiritual life will overcome all falsehoods of evil:


"That the Lord has [all Divine] power He Himself teaches in express words in Matthew: All power is given to Me in the heavens and on earth (xxviii. 18); and in Luke: Jesus said to the seventy who returned saying that the devils were obedient to them, Behold I give you power to tread upon serpents and scorpions, and over all the power of the enemy; and nothing at all shall hurt you. . . . All things have been delivered unto Me of My Father (x. 19, 22). By these words is described the power of the Lord over the hells; devils are they who are in the hells; serpents and scorpions are evils and the falsities of evil; to tread upon them is to destroy the evils and falsities; the hells are also meant by the enemy over which they were to have power." (Heavenly Arcana, n. 10019.4) 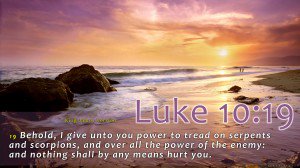