I keep trying to finish off this theory of everything based on a proposal by Arthur M. Young, but the problem with a theory of everything, there is everything to discuss.  Young published a book entitled The Reflexive Universe, where he stumbled upon a pattern of seven degrees of order in all of creation. Here is a diagram which sums it up:

As noted in previous blogs, he makes some errors, but at least he put the proposal out there so that it could be developed further. So, thus far I have corrected it, where there are seven planes of existence as follows:

Although Young left the subatomic plane blank, I was able to use his theory to sort out the plane of the subatomic particles.  Moreover, the pattern is predicting that the plane of space-time should have seven dimensions.  I looked up some modern theories, and separate theories in math and physics propose a world in which there are seven dimensions. String theory was one of them: it states that in addition to our 3 space dimensions and time, there are seven more spacial dimensions. This is what the math is saying - it has not been proven. However it has gone through some internal consistency checks and it has held up, and can unify the four forces.  It is just very, very hard to verify and validate.

What is string theory?  It is simple: instead of assuming that reality is composed of 0-dimension particles, these particles are in fact manifestations of vibrating strings:

To show that String Theory is a non-trivial solution to a problem, see the following excerpt from a NOVA documentary:


Now lets take a look at the first four planes of existence. They closely correspond to simple concepts in geometry:


1. Space-time. Scalar fields and particles. This is the closest we have to a "dimensionless" point.
2. Subatomic particles. If composed of strings, this order would correspond to a line.
3. Atoms. The third order, corresponding to a plane. Just as we need 3 points to create a flat plane, we need a minimum of 3 particles to make an atom. Of the seven categories of atoms, most atoms belong to the third category - transition metals (see previous blog).
4. Molecules. This corresponds to a 3 dimensional object.

Now of course, our simplistic concepts of a point, line, plane and solid do not accurately describe these four levels of reality.  We can say they correspond.  We can use simple geometric concepts to symbolically represent these realities. Throughout this theory of everything, planes of different orders correspond to each other, where one plane can describe higher or lower planes of existence.  So without doing the math, or understanding 7 or 11 dimensions, if we pay attention to the symbolism, we can guess what that plane of existence is like. Science cannot yet verify string theory. But through correspondence, its likely that the second plane is composed of strings.  And strings are not the final frontier: below that level, there are scalar fields. And this is where the ideas of Emanuel Swedenborg comes in, for he regarded the Doctrine of Correspondences as the science of sciences. It is the science that can explain everything, including higher level realities that are beyond the awareness of our senses.


WHY THREE DIMENSIONS IS NOT ENOUGH


Obviously, the String theory is wrong - there are only 3 dimensions and time, not 11 dimensions, right?  Well, let's think about it. In simple geometry, there are three dimensions, and every point has an x, y, and z coordinate: 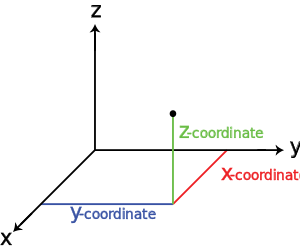 But the problem with simple geometry, is what is a point?  A point is a dimensionless object. And logically,  a 0 dimension object does not exist.

And that is what String theory is stating: apparently these vibrating strings originate from spacial dimensions beyond ours: except there are 7 more of them, not just 3. In those other dimensions, the strings exist as "branes" which manifest as vibrating strings in ours.


THE VIEW FROM EMANUEL SWEDENBORG

In the 20th century, the current thinking in science is that space-time is not nothing but rather one or more fields, and that there is no such thing as a particle.  The Higgs-Boson proves that there is a field that permeates the universe. But wait a minute - Swedenborg already said these things back in the 18th century.  Although many would probably discount his visions of heaven and hell, those who would ignore him are unaware he had clairvoyant abilities. On a number of occasions, he privately showed others that he could make contact with the dead in the spiritual world. On one occasion, he decided to pay a visit to Isaac Newton who had passed away in 1726.  And here is his description of the encounter (remember, Swedenborg wrote this in the 18th century):


Something shall be said here concerning vacuum. I once heard angels talking with Newton about vacuum, and saying that they could not bear the idea of vacuum as nothing; because in their world which is spiritual, and within or above the spaces and times of the natural world, they equally feel, think, are affected, love, will, breathe, yea speak and act; which things are utterly impossible in vacuum as nothing; because nothing is nothing, and of nothing nothing can be predicated. Newton said that he knew that the Divine which is, fills all things, and that he himself shuddered at the idea of nothing respecting vacuum, because that idea is destructive of all things; and he exhorted those who talked with him about vacuum, to beware of the idea of nothing, calling it a swoon, because in nothing no real existence of mind is possible. (Divine Love and Wisdom, n. 82, from Angelic Wisdom concerning the One God).

Apparently in the other world, Newton recognized his big mistake: he treated space as nothing, or a vacuum. Modern physics is telling us that space is not a vacuum: Einstein stated that gravity warps time and space, and the discovery of the Higgs-Boson in 2012 shows that all of space is permeated by a field that gives everything mass. And we still tend to think of mass as "particles".  So what did Swedenborg have to say about the nature of matter?  Look at these statements:


...it is a fallacy of the merely natural sense, that there are simple substances, which are monads and atoms; for whatever is within the range of the external sensual, the natural man believes to be such, or nothing. (Heavenly Arcana, n. 5084).

Obviously there are atoms; but by "monad" or "atom" Swedenborg is talking about an indivisible particle.


...every one shall be judged according to his works; for the end, or the love of his will, and the cause, or the reason of his understanding, are together in the effects, which are the works of his body; thus the quality of the whole man is in them. They who do not know these things, and do not thus distinguish the objects of reason, cannot avoid terminating the ideas of their thought in the atoms of Epicurus, the monads of Leibnitz, or the simple substances of Wolff, and thus closing up their understandings as with a bolt, so that they cannot even think from reason concerning spiritual influx, because they cannot think concerning any progression; for the author says concerning his simple substance, that if it is divided it falls into nothing. (Intercourse between the Soul and Body, n. 17, from Angelic Wisdom concerning the One God).

It is asserted by some that there is a substance so simple that it is not a form from lesser forms, and that from that substance, through process of massing, there arise substantial or composite things, and at length substances which are called material. But still no such most simple substances exist; for what is a substance without a form? It is something of which nothing can be predicated; and from an entity of which nothing can be predicated, no process of massing together can make anything. That there are innumerable things in the first created substances of all, that is, in the smallest and most simple things, will be seen in what follows, where forms will be treated of. (Divine Love and Wisdom, n. 229, from Angelic Wisdom concerning the One God).

As atoms were discovered during the nineteenth century, people must have thought Swedenborg was incorrect.  And here is an interesting statement - the smaller you go, the closer you will approach the infinite:


Know, that everything divided is more and more multiple, and not more and more simple,—because divided and divided it approaches nearer and nearer to the infinite, in which all things are, infinitely. This is a new thing that I relate to you, before unheard of. (Angelic Wisdom concerning Marriage Love, n. 329).

Well, for physicists, that is either depressing or comforting. Depressing, as they will never reach the final answer, but comforting, as there will always be something new to explore.  Swedenborg notes, that in the smallest thing, there are discrete and continuous degrees of order:


That the greatest and the smallest of all things consist of discrete and continuous degrees, or degrees of altitude and latitude, cannot be illustrated by examples from visible objects, because the smallest things do not appear before the eyes, and the greatest which do appear do not seem to be distinguished into degrees...The declarations of the angels on this matter are these: that there is nothing so small that there are not in it degrees of both kinds; thus nothing so small in any animal, nor in any plant, nor in any mineral, nor in the ether and the air, and because the ether and the air are receptacles of heat and light, that there is no least thing of heat and light; and because spiritual heat and spiritual light are the receptacles of love and wisdom, that there is no least thing of these in which there are not degrees of both kinds. The angels also declare that the least thing of an affection and the least of a thought, nay, that the least of an idea of thought, consists of degrees of both kinds, and that a least thing which does not consist of them is nothing; for it has no form, therefore no quality, and no state which can be changed and varied, and by this means exist. The angels confirm this by the truth, that the infinites in God the Creator, Who is the Lord from eternity, are distinctly one; and that there are infinite things in His infinites; and that in things infinitely infinite there are degrees of both kinds, which also in Him are distinctly one; and because these things are in Him, and all things are created by Him, and the things which are created resemble in some image those things which are in Him, it follows that there is not the least finite thing, in which there are not such degrees. That these degrees are equally in the least and in the greatest things, is because the Divine in the greatest and in the least things is the same. (Divine Love and Wisdom, n. 222-223, from Angelic Wisdom concerning the One God).