The Universal Order of Design - the symmetry of matter

THE DOCTRINE OF CORRESPONDENCES

In the doctrine of Correspondences explained in the works of Emanuel Swedenborg, everything is a symbolic representative of the creator who made it:

Swedenborg concentrates on the correspondences of the spiritual heavenly world, and found that the human form was the smallest representative of all of heaven:


I have been instructed by much experience, and indeed that not only the things pertaining to the human mind, namely, to its thought and affection, correspond to things spiritual and celestial, which are of heaven from the Lord, but also the whole man in general, and in particular whatever is in man, insomuch that there is not the smallest part, nor even the smallest constituent of a part, which does not correspond; also that man exists and continually subsists therefrom; and further, that unless there were such a correspondence of man with heaven, and through heaven with the Lord, thus with what is prior to himself, and by what is prior with the First, he would not subsist even a moment, but would dissolve into nothing. (Heavenly Arcana, n. 3628).

...the order of truths under the good of celestial love is such as is the order in the heavens; and from this the man who has such order in him, that is, who is regenerated, is called a little heaven, and indeed is heaven in the smallest form, for his interiors correspond to the heavens. (Heavenly Arcana, n. 5704).

This correspondence or symbolism extend further to the smallest thing that exists:

The Divine is also the same in the greatest and in the least of all the things which are created, and do not live; for it is in all the good of their use. The reason, however, why they do not live is, that they are not forms of life, but forms of uses; and the form is various according to the excellence of the use. (Angelic Wisdom concerning Divine Love and Wisdom, n. 79-80, in Angelic Wisdom concerning the One God).


Nothing can subsist, or exist, unless it corresponded with the self-existent one, God.  And this pertains even to the smallest constituents of atoms and subatomic particles. And long before quantum physics, or String theory, Swedenborg stated that the smaller we go, the more things we will find, until it will approach the infinite.


THE THEORY OF THE REFLEXIVE UNIVERSE

The inventor of the helicopter, Arthur M. Young, had some rather interesting ideas concerning correspondence between different planes of existence. However as he kept discovering more and more symbolism, he knew he was onto something, but he did not know what - but he would have figured it out if he knew about Swedenborg, for it seems he arrived at his idea completely independently of him. I have been evaluating and at times correcting the theory, in light of current scientific knowledge, and in light of what was revealed to Swedenborg in his visions. There are seven planes of existence, as follows:

Here are the geometric shapes of point, line, triangle, tetrahedron: 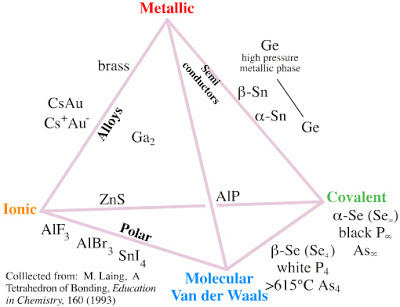 So the symbolism of the tetrahedron for the molecular plane is not just to be metaphysical: it is useful.  And this applies to the triangle for the atomic world as well: much of baryonic matter is composed of a triangle of three quarks. Here is an image of a proton with 3 quarks in it: 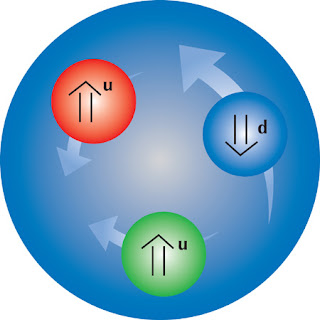 Between each quark, there is a gluon force. The quarks with the gluons would form a triangle. In order to describe the interactions between quarks and gluons, physicists assigned a "color charge" to a quark, where the quark can have one of three colors, or one of three anti-colors. They called them red, green and blue. They used color by way of analogy, as when all three are present the "color charge" does not appear: thus red, green and blue together make white. But in reality, it has absolutely nothing to do with color. The strong nuclear force, mediated by the gluon, only acts on particles with color charge. A gluon itself is composed of a color and an anti-color, thus gluon particles attract other gluons. When a gluon acts upon a quark, it may or may not change color, as shown below:

Gluon interactions, by way of color charge, is shown in the diagrams below: 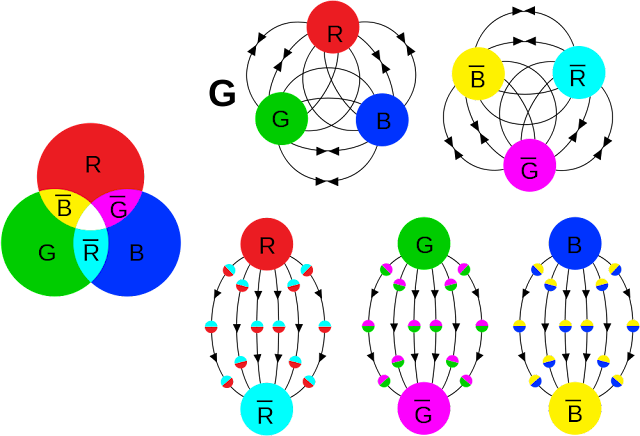 
AS ABOVE, SO BELOW

An ancient Hermetic saying is, "As above, so below."  That is, the smallest thing is a microcosm or reflection of the whole. Young did not know what went into the subatomic plane, as physicists at the time were still sorting things out.  Or, quantum physicists speak in mathematical terms that few outside their field understands.  Knowing what we know now, I proposed the following substates or sublevels for the subatomic plane, and by way of pure correspondence or symbolism, there are seven:

See the previous blog entries where I discuss how I arrived at this. There is an interesting correspondence between the subatomic world, and the molecular world: just as the first four substates of the subatomic world are the four known forces of the universe, the first four substates of the molecular world are defined by the four molecular bonds. Another point: light as level 2 has two states of polarization, at level 3 we have 3 W/Z bosons, and at level 4 we have 8 (2 x 4) gluons. So, if a tetrahedron is a useful geometric symbol for the molecular world (plane 4), then my thoughts on this was, what geometric shape would be useful for representing gluons (the fourth substate of the subatomic plane).  I was betting that it would be something similar to the tetrahedron...but that idea came up empty.  But I decided to persist.  The following video is a short summary of what we know of gluons:


The video states the following facts of what we know about gluons:


* There are 8 gluons.
* Each gluon carries a combination of "color charge" (1 positive color, 1 anti-color)
* There are no free gluons: they only exist when 2 quarks interact.
* Gluons have their own color charge, and can create secondary virtual gluons...ad infinitum.
* When 2 quarks interact, the 2 quarks swap color.
* Since color is conserved, the gluon must have 2 colors of its own.
* As distance between the quarks increase, the force of the gluon increases. This means the force is a "flux-tube", which means the gluon is shaped like a string.

Some of the facts stated above simplify the underlying reality.  First, if there are 3 colors, and 3 anti-colors, we should have a total of 9 gluons, as follows:


But that is not the case. There are 8.  Why is that?  The 8 gluon types are the result of SU(3) symmetry, described in Gell-Mann 3 x 3 matrices. See the article Why are there 8 gluons and not 9? for a better explanation. In physics, symmetry is a description of a stable state.  When the symmetry is said to be "broken", the physical system changes to another state.  When we look for order, we are looking for states, and the transitions between them. Symmetry plays a useful role in Gauge Theory, used to describe the order of the gauge bosons. Here is a Wikipedia entry on gauge theory:


Gauge theories are important as the successful field theories explaining the dynamics of elementary particles. Quantum electrodynamics is an abelian gauge theory with the symmetry group U(1) and has one gauge field, the electromagnetic four-potential, with the photon being the gauge boson. The Standard Model is a non-abelian gauge theory with the symmetry group U(1)×SU(2)×SU(3) and has a total of twelve gauge bosons: the photon, three weak bosons and eight gluons.

Here is another statement from Wikipedia describing symmetry in physics:

So without knowing it, by simple symbolic correspondence, I had arranged the gauge bosons in the proper order to fill in the gap of the subatomic plane in Young's theory of the Reflexive Universe:

Which is a nice, and surprising, confirmation. There is another theory known as "supersymmetry" to describe the symmetry between bosons and fermions (fermions are substates 5, 6 and 7). Gravity is problematic, with differing theories in Einstein's theory of relativity and the Standard Model.

As particle colliders kept finding more and more particles, things started to get messy, until the physicist Murray Gell-Man organized the subatomic baryons and mesons into octets, a theory which he called "The Eightfold Way" after the Eightfold Path of Bhuddism.  Here is a meson octet: 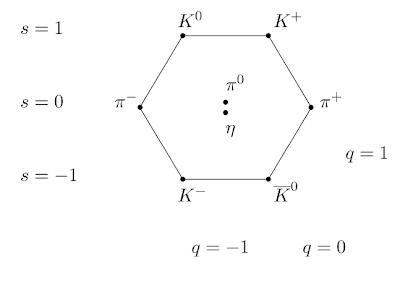 The letter s is something called "strangeness" and q is charge.  Here is a baryon octet: 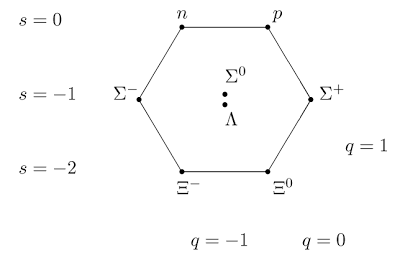 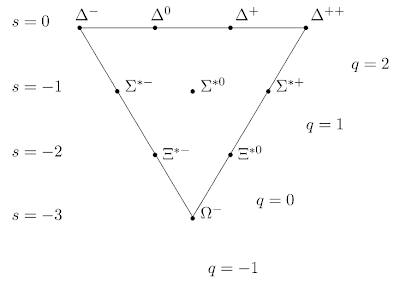 From the baryon decuplet, Gell-Mann was able to predict the existence of a particle before it was discovered. Again, the diagram is one of points and lines, forming a connected series of triangles. Here is the baryon decuplet again, this time showing the up, down and strange quarks used to compose each baryon: 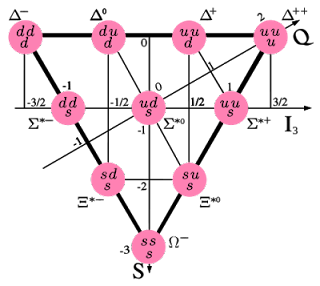 And here is the Pythagorean Tetractys: 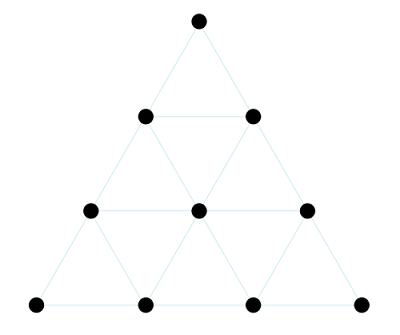 What! Wait a minute - what is the Pythagorean Tetractys?  It was a very ancient sacred symbol among the Pythagoreans. What does it have to do with particle physics?  Well, nothing.  Except that the best theory to explain the behaviours of many of the subatomic particles forms a Tetractys.

The Pythagoreans was esoteric philosophical sect in Greece, which focused on the symbolism of numbers in mathematics. Here is a description of the Tetractys, borrowed somewhat from Wikipedia:

Well that is interesting! In ancient times all of matter was assigned to the four elements. We now know most matter is baryonic matter.  And we now know that the numbers of the particles of baryonic matter form a Tetractys!  This took me by complete surprise.  A search on the internet shows some others have noted in, but just in passing.  However, there is more: The Tetractys represented the organization of space:

Recall that the first four planes of existence: space-time, subatomic particles, atoms and molecules can each be symbolized by a point, line, triangle and tetrahedron. Again, this is an example of how the smallest part contains the whole.

A prayer of the Pythagoreans shows the importance of the Tetractys (sometimes called the "Mystic Tetrad"), as the prayer was addressed to it:


"Bless us, divine number, thou who generated gods and men! O holy, holy Tetractys, thou that containest the root and source of the eternally flowing creation! For the divine number begins with the profound, pure unity until it comes to the holy four; then it begets the mother of all, the all-comprising, all-bounding, the first-born, the never-swerving, the never-tiring holy ten, the keyholder of all".


"By that pure, holy, four lettered name on high,
nature's eternal fountain and supply,
the parent of all souls that living be,
by him, with faith find oath, I swear to thee."


The Kabbalists, a mystic form of Judaism, took note of this Pythagorean symbol and connected it to the Tetragammaton, or the four letter name of Jehovah in Hebrew: YHWH. The name was so sacred that in Hebrew they pronounced it as "Lord" (Adonai). The other thing that they took note is that the numbers 1 through 4 add up to 10, and of course there are 10 commandments.