The Spiritual Meaning of the Apocalypse, or End of the World

On numerous other occasions various Christian sects have predicted the Second Coming, or end of the world.... and all have failed.  And the reason for the failure?  There is no such thing as an "end of the world."  This idea comes from a misinterpretation of scripture, which is interpreted literally.  But Jesus did promise He would return, and there are numerous prophecies to that effect in the scripture.  So let's dispel misconceptions about the Second Coming and the end of the age once and for all:


PRINCIPLE #1: THERE IS NO SUCH THING AS THE "END OF THE WORLD"

The phrase "end of the world" comes from the last statement of Jesus in the book of Matthew:

Some may dispute the translation of "world" or "age" in the above verse.  But just to settle that, "world" does have the meaning of an age.  The Apocalypse mentions the Lamb slain "from the foundation of the world."  (Rev. 13:8) That does not mean before the world was created, it means that Jesus was crucified and rejected at the beginning of the foundation of the Christian dispensation.  And here are some other common passages that are misinterpreted:

I saw a great white throne and Him who sat on it, from whose face the earth and the heaven fled away. (Rev. 20:11)

This does not mean the visible sky above will pass away, nor the earth under our feet will pass away.  "Earth" or "land" in scripture means where the church is on earth, and "heaven" the angels associated with that church in the spiritual heavens.  Many hold onto the believe that the church they grew up will always preserve the truth.  That is not necessarily true.  As Jesus said, what lasts forever is God's Word.  The churches on earth, however, have a beginning, middle and an end.  And all good things must come to an end.


PRINCIPLE #2: THE END COMES WHEN THE CHURCH BECOMES CORRUPT, AND INSTEAD OF TRUTH FOLLOWS WHAT IS FALSE

This principle is harder for people to accept. No one wants to believe that the religion they were born in teaches what is false. Everyone assumes the religion that they were born in, what they were taught by their parents, is the absolute truth.  But for those who desire true spiritual understanding, they are the ones who will follow the truth for the sake of the truth, wherever it leads them.  They will make the decisions for themselves, instead of trusting some authority.  You should not believe something because someone told you so.  Investigate it for yourself. And be willing and open to accept, that you might be wrong.  Then you open your mind to receiving truth, for that which is false will block it.

That the end comes when the church becomes corrupted, can be seen with what happened in the first coming of Jesus: the Jews completely rejected Him, and crucified Him.  They were not willing to reject what was taught to them by their elders and scribes.  They had become so entrenched in their falsity, their hypocritical belief that they were better than others, that they could not see the Messiah right before their eyes.  And, they did not want a spiritual Messiah, they wanted an earthly one. So they crucified Him.

And this, readers, is exactly what will happen with the Christian Church.  Like the Jewish Church, many will follow the old way of thinking, and not even know that their church has come to an end in the eyes of heaven.  When He comes again, He will be rejected by many, because they no longer believe in what is true:


Nevertheless when the Son of man cometh, shall he find faith on the earth? (Luke 18:8)

And whoever will not receive you nor hear you, when you depart from there, shake off the dust under your feet as a testimony against them. Assuredly, I say to you, it will be more tolerable for Sodom and Gomorrah in the day of judgment than for that city! (Mark 6:11)

Therefore when you see the 'abomination of desolation,' spoken of by Daniel the prophet, standing in the holy place" (whoever reads, let him understand), "then let those who are in Judea flee to the mountains... (Matt. 24:15-16)

The first is self explanatory: there will be very little faith when the Second Coming occurs.  And by "faith" I am not talking about belief. I am talking about living by what you believe.  Living by your belief, reforming your life from sin, that is faith. If you just go to church, and say that you believe, that is not faith.  Secondly, the day will be like that of Sodom and Gomorrah: only one family was saved out of a whole city.  Again, faith will be there among the few.  Thirdly, before the end comes one must recognize the "abomination of desolation" standing in the "holy place."  The holy place is the church, and that which it believes is corrupt, where there is no truth left.


PRINCIPLE #3: THE NEW REVELATION WILL NOT BE OBVIOUS AND VISIBLE

Here is another false principle: when the Second Coming occurs, everyone will see and know it, right?  Wrong.  It will not be visible in front of our eyes.  However towards the end, when people become sensual and materialistic, they will expect something in front of their eyes that will allow them to believe.  But this is not so:


And when he was demanded of the Pharisees, when the kingdom of God should come, he answered them and said, The kingdom of God cometh not with observation: Neither shall they say, Lo here! or, lo there! for, behold, the kingdom of God is within you. And he said unto the disciples, The days will come, when ye shall desire to see one of the days of the Son of man, and ye shall not see it. And they shall say to you, See here; or, see there: go not after them, nor follow them. (Luke 17:20-23)

Another false principle is people expect God to actually form a political kingdom here on earth during a millenium. Again that is false: God's kingdom on earth is the church. And God's kingdom exists inside your heart, not in an outward visible manifestation.  But before we proceed further, there is one other passage I would like to discuss concerning the Second Coming:


Behold, He is coming with clouds, and every eye will see Him, even they who pierced Him. And all the tribes of the earth will mourn because of Him. Even so, Amen. (Rev. 1:7)

Again, many who interpret scripture in a literal manner will come to a misunderstanding that they expect to see Jesus up in the sky, somewhere in the clouds.  And since it says "every eye will see Him," doesn't that mean everybody will see it?  The answer is, no.  As said earlier, it will first be seen by few.  The phrase "every eye" does not mean everybody, it means everyone who has eyes of spiritual understanding, who have a spiritual affection for truth, they will see that the new revelation is true.  That "eyes" signifiy spiritual enlightenment, is shown by the following:


PRINCIPLE #4: THE SECOND COMING WILL NOT BE IN PERSON, BUT IT HAS COME IN THE WORD ITSELF

This last principle is known to few, for few know that there is a hidden spiritual sense inside all of scripture. And when said, I know it will be a surprise to many who still expect a visible coming in front of their eyes.  This hidden spiritual sense, the revelation of it, is the Second Coming.  Why is it the Second Coming?  Because, it is known that Jesus Himself is the Word of God in human form:

The Word of God, or Divine Truth, which became incarnate in Jesus, is ever present in scripture itself.  The revelation that there is a spiritual sense inside of scripture, hidden behind the literal sense of every word, is the Second Coming: it is also the proof that scripture is Divine Inspired.  It is often said that the Son of Man will come in "the clouds of heaven."  Heaven is not the sky above, it is the spiritual heaven, and revelations from the spiritual heaven take place in visions.  Thus it is said:

And then later it is said:

So what is the spiritual sense of scripture, and the Apocalypse? What are those seven thunders that were never written?  This was revealed in visions, over a period of over 25 years, in multiple volumes published by Emanuel Swedenborg.


THE APOCALYPSE REVEALED AND EXPLAINED

I cannot summarize multiple volumes in a blog, showing the hidden spiritual sense of scripture. I have given you a sense of the spiritual meaning of scripture with a verse or two.  Swedenborg revealed the hidden sense of the Apocalypse in six volumes which he never published, which you can find online, or in the following work which I just published on Amazon (click here).  It has the advantage where every paragraph number is hyper-linked (Swedenborg always makes tons of references to prove each point from scripture), and in many cases updated to modern English: 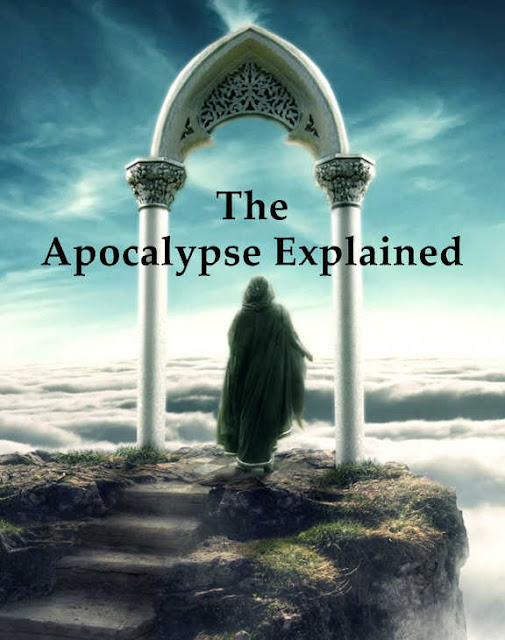 When the spiritual sense of scripture is opened, even the smallest details has meaning. The fact that the apostle John has his back turned, and Jesus is behind him, and he has to turn around, means that at the end of the age the Christian Church will be facing in the wrong direction. They will not know who Jesus is, and instead follow a trinity of three persons.

The "Apocalypse Explained" for some mysterious reason was never published by Swedenborg, and instead opted to publish a much shorter version called "Apocalypse Revealed."  But in so doing, he left out the many discourses where he dives into other portions of scripture to explain the symbolic meaning. Some consider the "Apocalypse Explained" to be the better work, but it was still draft, and the published version at times corrects minor points, or clarifies a meaning. In one particular case "Apocalypse Explained" has the better reading. I decided to put both works together - a total of nine volumes in one work.  It is perhaps the most comprehensive interpretation of the Apocalypse ever published -- and there are many. Unlike the others, this author claims to have received the information from revelation.  You do not have to believe that, the explanations are quite insightful, and obscure passages never before known are explained in full - nothing is skipped or glossed over.  Not only that, but to make comparison and referencing easier, paragraph numbers in Apocalypse Revealed are hyper-linked to each other in the following work on Amazon (click here). 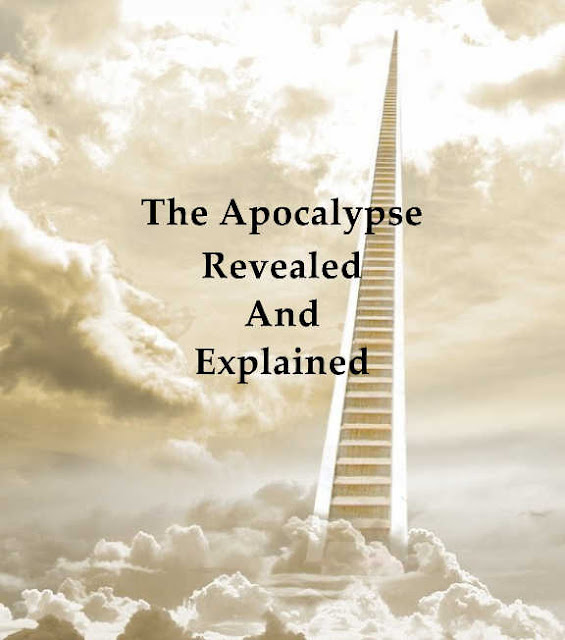 The other works of Emanuel Swedenborg were previously published in a multi-volume work called "The Divine Revelation of the New Jerusalem" which is described in an earlier blog entry (click here).  When I began work on the Apocalypse Explained, I did not realize how big it was, nor did I realize when starting how many references it had to his other works.  So I decided to create an expanded edition which includes the Apocalypse Explained entitled The Divine Revelation of the New Jerusalem (Expanded Edition): 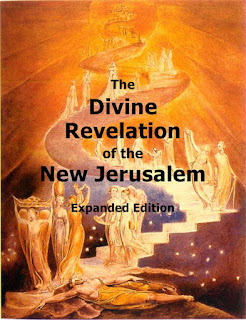 But, if you are just looking for the spiritual meaning of the Apocalypse or the book of Revelation, the previous work is sufficient, and a good study tool.  Enjoy!  It took me many hours of work.  Hopefully this will dispel once and for all the popular misconceptions concerning the end of the world and the Second Coming. And maybe it will give you fuller insight into the hidden mysteries of the Christian revelation.
Posted by Doug Webber at 1:37 PM