The Spiritual Symbolism and Health Benefits of Hyssop and Cedar 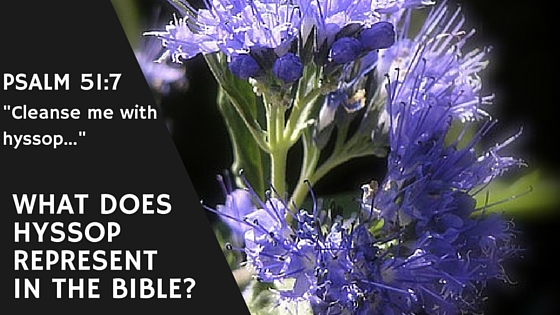 The smallest of details in scripture has meaning, and for the first time the revelations of the New Church reveals the internal spiritual sense of the Word which until now has been unknown to the Christian Church. Hyssop is a plant used in Jewish cleansing rituals, and I was asked why hyssop? And what does it mean? I was asked this question, and very few can go to this level of meaning, but with the revelations given in the New Church we can easily explain this. Hyssop was used in a cleansing ritual for leprosy, and like all Jewish rituals, it is representative of something holy, and even the Jews did not know the meaning of it:


"...so in a house where there was leprosy, [the priest] was to take cedar wood and hyssop and scarlet and with the blood of the bird sprinkle seven times (xiv. 6, 7, 27, 51). Here any one may see that there is nothing at all in the cedar-wood, the scarlet, the oil, the blood of a bird, nor yet in seven, except from the fact that they are representative of holy things. Take away from them what is holy, and all that remains is dead, or profanely idolatrous. But when they signify holy things there is Divine worship therein, which is internal, and is only represented by the externals. The Jews could not indeed know what these things signified; nor does any one at the present day know what was signified by the cedar wood, the hyssop, the scarlet, and the bird (Heavenly Arcana, n. 716)

Hyssop first appears in the ritual where Jews were commanded to use hyssop and dip it in the blood of the Passover sacrifice and spread the blood on the lintel and doorposts of their houses (Ex. 12:22). The spiritual meaning of the Passover concerns the liberation from evil which is discussed in detail in a previous blog (see The Spiritual Meaning of Passover). It is in this ritual where the spiritual meaning of hyssop is first explained:


"And ye shall take a bunch of hyssop. That this signifies an external means by which is purification, is evident from the signification of hyssop, as external truth which is a means of purification — of which in what follows. It is said that they should take a bunch of hyssop, because bunch is predicated of truths and their arrangement (n. 5530, 5881, 7408). That hyssop is external truth as a means of purification, is because all spiritual purification is effected by truths. For the earthly and worldly loves, from which man is to be purified, are not recognized except by means of truths" (Heavenly Arcana, n. 7918)

"External truth" is a truth that is followed in its most simplest form, without a spiritual understanding of that truth, such as in acts of simple obedience from what one has learned from religion. Swedenborg gives several examples (see Heavenly Arcana, n. 3820), where people may do good to others according to their religion but without spiritual discrimination of who that person is. Or they follow the religion because of tradition or authority without exploring it for themselves. The understanding of those who follow external truths is weak, and thus they can be easily misled by the evil. But we all begin by simple obedience to the "rules" without understanding, and later one's spiritual understanding is opened to those who wish and ask for it.

That hyssop signifies external truths by which one is purified from evils, is shown in the ritual where it is applied on the exterior door of the house. The house signifies one's mind, and the door is the external entrance to it. Blood is used in the ritual for it also signifies truth in general by which one is purified, for it is truth that tells us what is right and what is wrong. In other rituals, hyssop is combined with cedar wood:


"Because hyssop has this signification, therefore it was applied in cleansings, which in the internal sense signified purifications from falsities and evils — as in the cleansing of the leprosy, in Moses: The priest shall take for the leper that is to be cleansed two living clean birds, and cedar wood, and scarlet and hyssop . . . and shall dip them . . . in the blood of the bird that was killed . . . and he shall sprinkle upon him who is to be cleansed (Lev. xiv. 4-7); and in like manner in the cleansing of a house, if the leprosy be in it (verses 49-51). For preparing the water of separation by which cleansings were wrought, cedar wood and hyssop were also employed (Num. xix. 6, 18); by cedar wood was signified internal spiritual truth, and by hyssop external; thus by cedar an interior means of purification, by hyssop an exterior. That hyssop is a means of purification, is very manifest in David: Thou shalt purge me with hyssop, and I shall be clean: Thou shalt wash me, and I shall be whiter than snow (Ps. li. 7) — where being purged with hyssop and made clean stands for external purification, being washed and made whiter than snow for internal purification: snow and whiteness are predicated of truth (n. 3301, 3993, 4007, 5319). That hyssop is lowest truth and cedar higher truth, is plain from these words in the First Book of Kings: Solomon spake of trees, from the cedar tree that is in Lebanon even unto the hyssop that springeth out of the wall (iv. 33) — where cedar stands for internal truth of intelligence, and hyssop for external truth of intelligence." (Heavenly Arcana, n. 7918.2)

So while hyssop represents external truth that purifies, in these rituals cedar wood represents internal truths that purify.  So why is this? Here we would need to look at the classification of hyssop and cedar in the plant kingdom. Hyssop is known as Origanum Syriacum, belonging to the Clade of Angiosperms, which means it is a flowering plant: 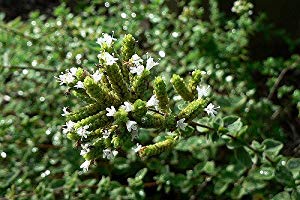 In spiritual terms, flowers correspond to memory knowledges of the truth, which is the same as external truth:


"And its flowers. That this signifies knowledges of truth, is evident from the signification of flowers, as knowledges of truth. Flowers have this signification, because flowers are growths which precede and in their manner produce fruits and seeds, for, as is well known, trees and plants blossom before they bear fruit. The case is the same with man as to intelligence and wisdom. Knowledges of truth precede and in their manner produce with man those things which are of wisdom; for they serve as objects to his rational, and thus as means for growing wise. It is for this reason that knowledges of truth are as flowers, and that the good of life, which is the good of wisdom, is as fruit. Since all things which are in the spiritual world have reference to such things as are in man, for the reason that heaven represents one man and corresponds to each and all things with man, therefore also all things which are in the natural world, according to their agreement with such things as are with man, correspond, represent, and signify" (Heavenly Arcana, n. 9553)

As for the cedar tree, it is a coniferous tree: 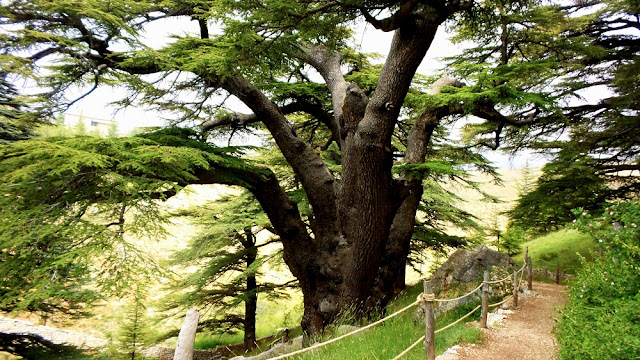 As the cedar tree grows to a greater height towards the sky, so it represents cleansing by internal spiritual truths. It is also a Gymnosperm, which means that unlike flowering Angiosperms their seeds are unenclosed - as the seed is exposed it again represents internal truth.

That hyssop signifies external truths by which there is purification from evil can finally be seen in the spiritual significance of the crucifixion of Jesus on the cross:


"Jesus, knowing that all things were now finished, that the Scripture might be fulfilled said, I thirst. And there had been placed a vessel full of vinegar; and they filled a sponge and placed it upon hyssop, and put it to His mouth. And when Jesus had received the vinegar He said, It is finished (xix. 28-30).

Those who think of these things only naturally and not spiritually may believe that they involve nothing more than that the Lord thirsted, and that vinegar was then given Him; but it was because all things that the Scriptures said of Him were then finished, and because He came into the world to save mankind that He said, "I thirst," which means that from Divine love He willed and desired the salvation of the human race; and that "vinegar was given Him" signifies that in the coming church there would be no genuine truth, but truth mixed with falsities, such as there is with those who separate faith from charity or truth from good; this is what "vinegar" signifies; "they placed it upon hyssop" signifies some kind of purification by it, for "hyssop" signifies an external means of purification" (Apocalypse Explained, n. 386e).

Thus the significance of the crucifixion means that the Christian Church, throughout its history, would only be familiar with truth in its most external form signified by hyssop, and mixed in with false ideas signified by vinegar. The fact that Jesus was crucified alongside two thieves would also signify that the Christian Church would falsely invent the idea of a tripersonal god, not recognizing that the True Trinity is in the soul, body and spirit of Jesus Christ who is Jehovah in human form. For thieves in the spiritual sense represent those who steal away and deprive others of spiritual truths, or those who take away from the truth that God is one personal Being who became incarnate in human form.


THE HEALTH BENEFITS OF HYSSOP AND CEDAR

Plants do not just signify spiritual things, but their spiritual significance also corresponds to their health benefits. Hyssop, or Origanum syriacum or Lebanese oregano, is used in the Middle East for flavoring their foods. However it has the following health benefit, from Lebanese Oregano (Origanum Syriacum) Overview, Health Benefits, Side effects -


It is worth mentioning here that the Lebanese oregano is one of the sources of the essential oil called carvacrol. This essential oil has antiseptic and other terpenoids with properties as thymol is effective in inhibiting different types of harmful bacteria, for example Pseudomonas aeruginosa. This oil works by corrosion of the cell wall of bacteria.

Thus external truths that purify one from evils corresponds to how the ingredients of hyssop corrodes the external cell wall of bacteria. But what about the health benefits of the cedar tree? From 14 Cedarwood Essential Oil Uses for Wisdom, Beauty & More -


Who knew that the oil from a tree could be so beneficial to your health and wellness? Surprisingly, cedarwood essential oil has anti-inflammatory, antispasmodic, antifungal, tonic, astringent, diuretic, sedative and insecticidal properties.

There are a number of surprising benefits of cedar oil, for which I recommend the above web site, but the one that corresponds to purification by internal truth would probably be the following health benefit:


Because cedarwood essential oil is a sedative, it has the power to relieve tension and stress that can negatively affect your health. It has a soothing and calming effect on the mind, reduces inflammation and muscle pain, and minimizes skin irritation. Research published in 2017 demonstrates that the scent of cedarwood essential oil ,which contains cedrol, can promote sleep by increasing parasympathetic activity and increasing serotonin production.

Thus when Jesus healed a person, we would often command them to sin no more. He also compared Himself to a physician:


And when Jesus heard it, he said to them, “Those who are well have no need of a physician, but those who are sick. I came not to call the righteous, but sinners.” (Mark 2:17)