The Light of an Angel caught on Video Tape 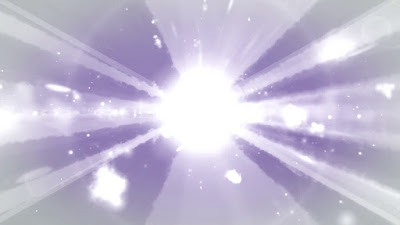 For those seeking evidence for the existence of angels, here is a remarkable video of a dying girl who miraculously recovers from an illness.  After being taken off of the ventilator, the hospital security cam caught images of light coming from the door of the hospital room - and at the same time, her mother managed to capture the light on her mobile phone camera.

There are many reports of angels, with multiple visitations recorded in the Bible, but this is the first I have seen where something is caught on video tape - and we have multiple witnesses, plus a miraculous healing.  There are two important points here:

This child is disabled.  And the mother has to take care of her day in, day out.  So we should think about this the next time we decide to take someone off of life support, or to have an abortion.  It is unusual that such a manifestation took place, as angels typically operate unseen in order to not interfere with free will. I am not sure why, but had a dream last night which directed me to discuss this particular event.


ANGELS SEEN IN THE VISIONS OF EMANUEL SWEDENBORG

For over a period of 25 years, in the 18th century a scientist had his vision opened and was able to report freely on the reality of heaven and hell, and perhaps more than any other was able to interact directly with angels. The reason why this was allowed, is that in this day and age there is a complete lack of belief and knowledge concerning the afterlife. In a secular society, religion is for the most part considered irrelevant, due to the falsity that has invaded the theology, and due to what I call the "ossification" of religion towards its end - false doctrines are accepted as true, and these false doctrines are used to decide what is orthodox or not. Despite being allowed to see heaven and hell, and the ability to interact directly with angels, Swedenborg makes it very clear that the doctrines he received were from the Lord alone, and that no angel dared to give him any teaching:


That the Lord manifested Himself before me His servant, and sent me to this office, and that He afterward opened the sight of my spirit, and so has admitted me into the spiritual world, and has granted to me to see the heavens and the hells, also to converse with angels and spirits, and this now continuously for many years, I testify in truth; likewise, that from the first day of that call I have not received any thing which pertains to the doctrines of that church from any angel, but from the Lord alone while I read the Word. (True Christian Religion, n. 779)

This kind of revelation was more immediate: one in which the Word itself was read, and the Lord would open up the spiritual meaning while he read it. Angels are not allowed to communicate directly through words or thought, but can influence us via feelings and emotions. In that way, a person's free will is not impacted.

As for the video, where some bright light manifested itself, did Swedenborg report this kind of light?  Indeed he did, here are just some portions of his testimony:

I have so many times seen the light in which spirits and angels live, that at last I have ceased to wonder, because it has become familiar. But to adduce all my experience would take too much space; I will therefore relate these few things only.
That I might know the nature of the light, I have many times been conducted into the abodes where good spirits and angelic spirits dwell, and have there seen not only the spirits but also the things that were there. There have also been seen infants and mothers in light of so great brightness and resplendence that there could not possibly be anything brighter.
An intense flamy light, which I was not expecting, poured down before my eyes, dazzling them greatly — not merely the sight of the eye, but the interior sight also. Presently there appeared a sort of obscurity, like a thick, cloud, in which there was as it were something earthy. And when I was wondering, it was given me to know that such is the light with the angels in heaven, in comparison with the light in the world of spirits; and that although the spirits live in light, yet still there is such a difference; and that, as does the light, so also do the intelligence and the wisdom of the angels exceed the intelligence and the wisdom of spirits; and not their intelligence and wisdom only, but also all the things that belong to intelligence and wisdom, as their speech, thought, joys, and felicities; for these correspond to the light. From this it was also evident to me, how great and of what kind are the perfections of angels as compared with men, who are in obscurity more than spirits. (Heavenly Arcana, n. 1522-24).

Moreover, the light of spirits and of angels has been seen by me so many times, that pages would be filled if all the experiences were recounted. (Heavenly Arcana, n. 1526).

Until he experienced this, Swedenborg could hardly conceive that such a spiritual world in such light existed:


Of the numberless things which appear in the other life, I could scarcely form any other idea than others do, before my sight was opened; that is to say, that there could be no light, and such things as exist from light, together with the things of sense, in the other life; and this from the fantasy entertained by the learned respecting immateriality, which they predicate so strongly of spirits, and all things pertaining to their life; from which no other conception could be had, than that, because it was immaterial, it was either so obscure that no idea of it could be grasped, or that it was nothing; for immateriality involved such things. And yet the fact is just the reverse; for unless spirits were organized, and angels were organized substances, they could neither speak, nor see, nor think. (Heavenly Arcana, n. 1533)

Swedenborg speaks of how this heavenly light is infinitely brighter than the light of this world:


There is also actually light in heaven, and infinitely brighter than light on earth  (Heavenly Arcana, n. 3195.2)

The light of heaven, by which is sight there, is Divine truth from the Lord, which appears before the eyes of the angels as light, a thousand times brighter than the midday light in the world; and as this light has life in it, therefore at the same time that it illumines the sight of the eye of angels, it illumines also the sight of their understanding, and causes an apperception of truth, according to the amount and quality of the good in which they are.  (Heavenly Arcana, n. 5400)

It was mankind's separation from this heavenly light, which caused the Lord to descend and assume a human form:


As regards the origin of light, it was from eternity from the Lord alone; for Divine good itself, and Divine truth, from which light comes, is the Lord. The Divine Human, which was from eternity (John xvii. 5), was that light itself. And whereas that light could no longer affect the human race, which had removed itself so far from good and truth, thus from light, and had cast itself into darkness, therefore the Lord willed to put on the human itself by nativity: for thus He was able to illumine not only the rational things of man, but also the natural; for He made both the rational and the natural in Himself Divine, that they also might have light, who were in such gross darkness. (Heavenly Arcana, n. 3195.3)

So for most, that light that appeared on camera is just a curiosity.  If you had the chance to learn more about that realm of light, would you? I certainly would.