When discussing the possibility of extraterrestrial life, lets stick to facts and hard evidence. We have a large body of witnesses - some top government and military officials - who state there is active UFO activity around the world. This activity seems to have picked up since the explosion of the atomic bomb, and our recent exploration into space.  I just found what has got to be one of the strangest news items I have ever seen: Alien-Looking Skeleton Poses Medical Mystery.  And it was posted just yesterday.  Just take a look at this thing: 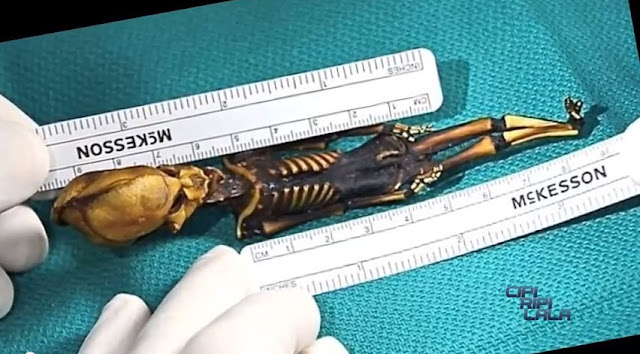 What in the heck is this?  Its a six inch skeleton that was found in the Atamaca desert in Chile.  Not only does it have a different skull, but it only has 10 ribs (humans have 12).  Is this a fraud? No, they have taken it to a lab and have done DNA tests on it.  Is it a foetus?  No, apparently the tests show that this was "6-8 years old" when she died.  According to the news article:

"While the jury is out regarding the mutations that cause the deformity, and there is a real discrepancy in how we account for the apparent age of the bones … every nucleotide I've been able to look at is human," researcher Garry Nolan, professor of microbiology and immunology at Stanford School of Medicine, told LiveScience. "I've only scratched the surface in the analysis. But there is nothing that jumps out so far as to scream 'nonhuman.'"

But is it human?  There is one caveat here:

The genome sequencing suggested the creature was human, though 9 percent of the genes didn't match up with the reference human genome; the mismatches may be due to various factors, including degradation, artifacts from lab preparation of the specimen or insufficient data.

9% is a lot.  That's more than the difference between us and apes.  An analysis of the mitochondrial DNA, however, is conclusive: the mother is human and was from a haplotype that is common in South America.

So, we have two conclusions here. Either there are a bunch of 6 inch midgets running around in the desert of Chile, or we got something else here on our hands.  But here is another issue: even if it is human DNA, Swedenborg basically stated that the extraterrestrials he encountered were...human.  So how are we to know the difference?