Evidence of Extraterrestrial Life on Mars

The last several blog entries have been discussing the existence of extraterrestrial UFOs, and how we should take the evidence and reassess what Emanuel Swedenborg said concerning his contact with extraterrestrials in the 18th century.  In the course of my research, I found strong evidence - undeniable evidence - that NASA has censored and tampered with the photos to possibly hide evidence of extraterrestrial and UFO activity on other planets in our solar system.  This is not just another conspiracy theory - the evidence is undeniable.  To hide this fact, there are plenty of disinformants out there who try to look at pictures as if they were an ink blot and find evidence of life everywhere.  Earlier I had shown a video of a possible UFO sighting in one of the pictures of the Spirit rover on Mars.  That's one thing, but this one took me by complete surprise.  Just take a look at this video:

Somebody - something - was messing around with the Martian landscape around the rover.  I did not believe this at first.  Did someone just tamper with the NASA pictures to fake this video? No - the video references pictures from the NASA web site, which can be found here: http://marsrovers.jpl.nasa.gov/gallery/all/spirit.html.  From there, go to the navigation camera, and look at the pictures from Sol 1833 to Sol 1843.  This video really caught my attention, so I decided to download the relevant pictures and analyze them myself.  Here is the first picture (original size) from Sol 1833, and I put a red square box around the rock in question: 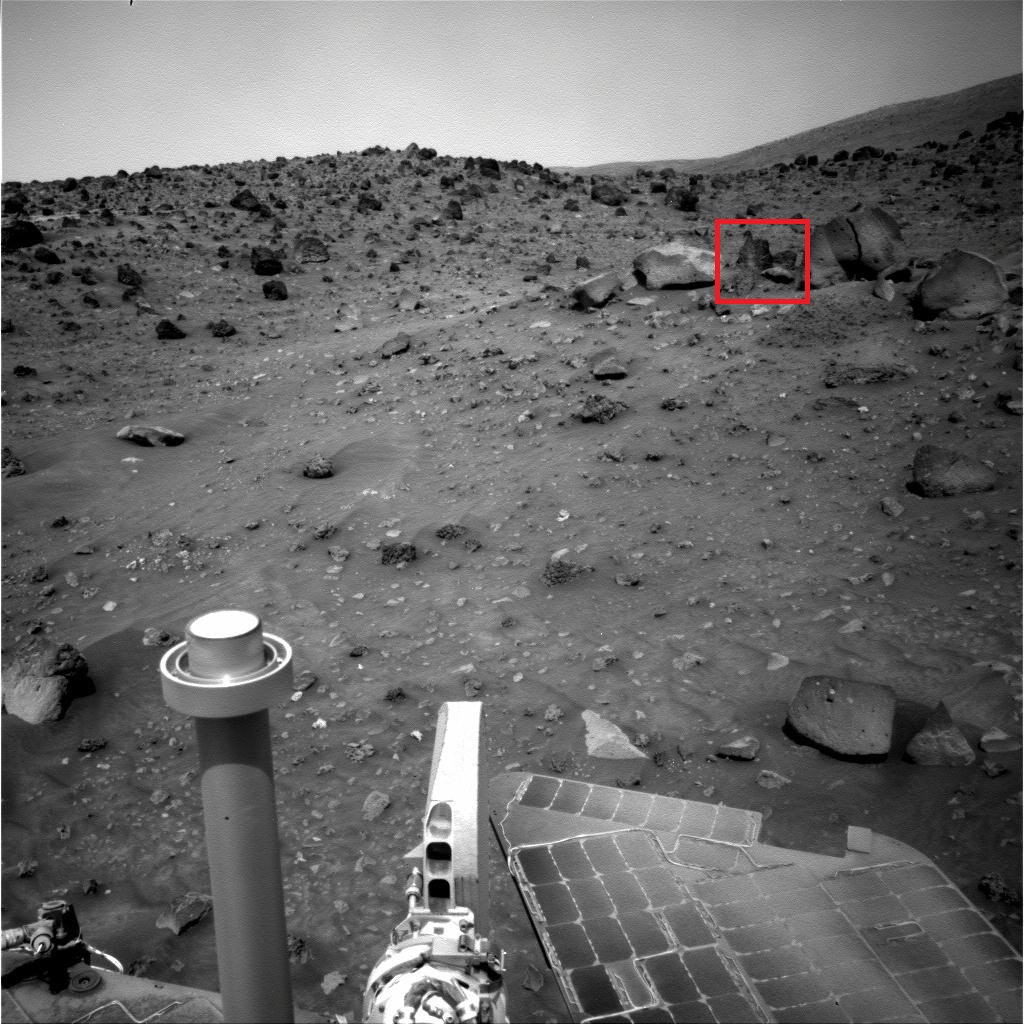 Now, lets take a look at another shot of the same set of rocks from Sol 1836 - THE ROCK IS MISSING. Actually, when I looked a this more closely, two rocks are missing. 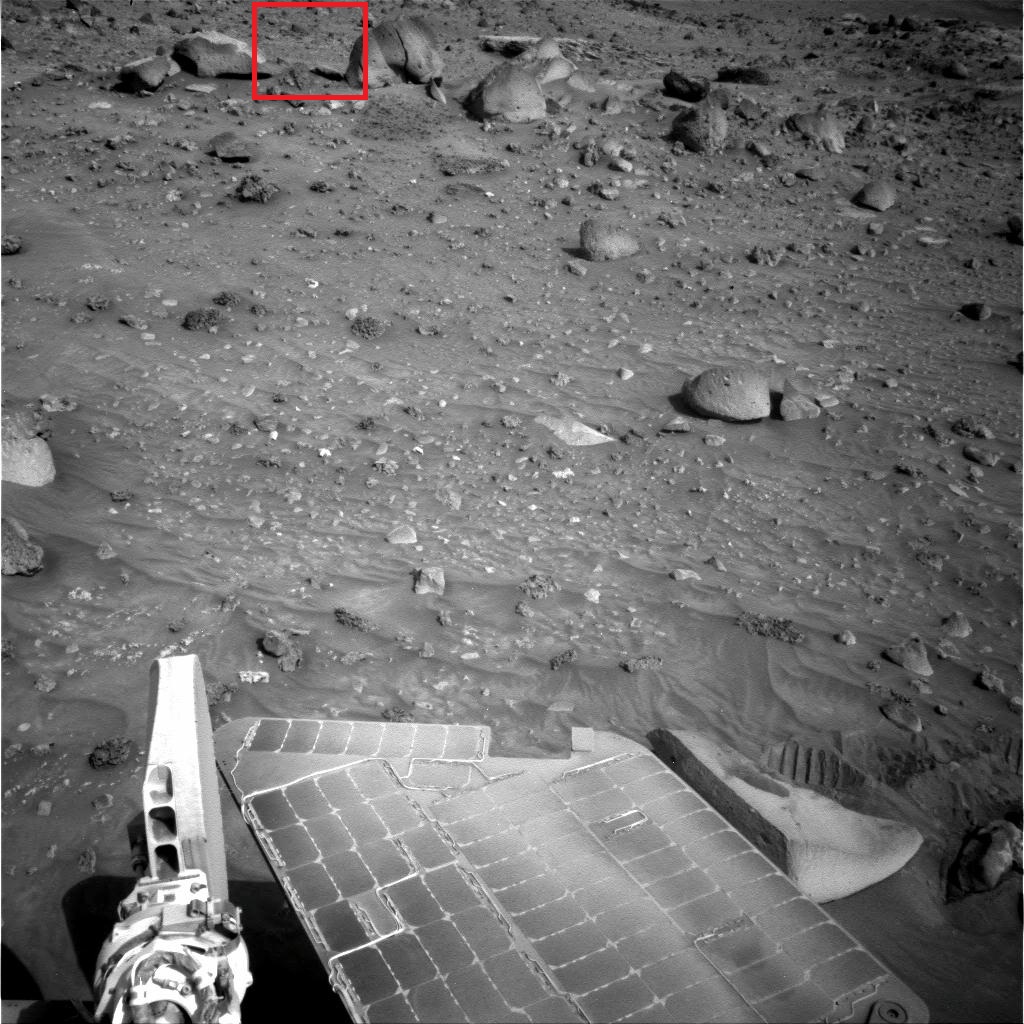 And now, lets jump to Sol 1843: THE ROCK REAPPEARS IN A DIFFERENT SPOT: 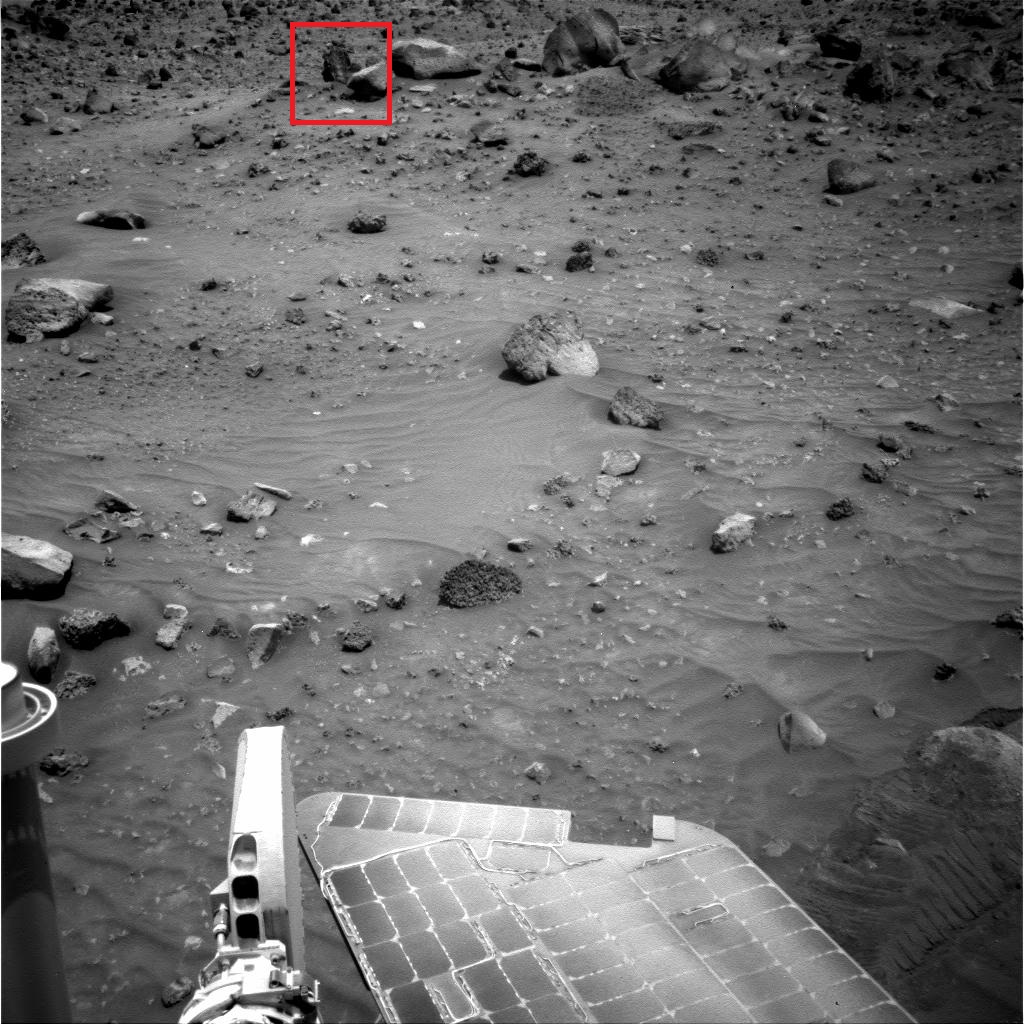 Not only is this mysterious, it is just incredibly funny.  There is no way a rock just disappears, and then just reappears in a different spot several days later.  Its as if an intelligence knows NASA is tampering with the photos, so they decided to tamper with the rocks.  Imagine the nightmare of the censors for these photos: censoring out photos of UFOs is easy, but now they have to note the position of every rock? And this is not just a pebble that's easily moved, it is a sizeable, heavy rock.

So, if there is extraterrestrial life on Mars, why don't they just show up in front of the camera, wave, and say "cheese"?  Sort of like this: 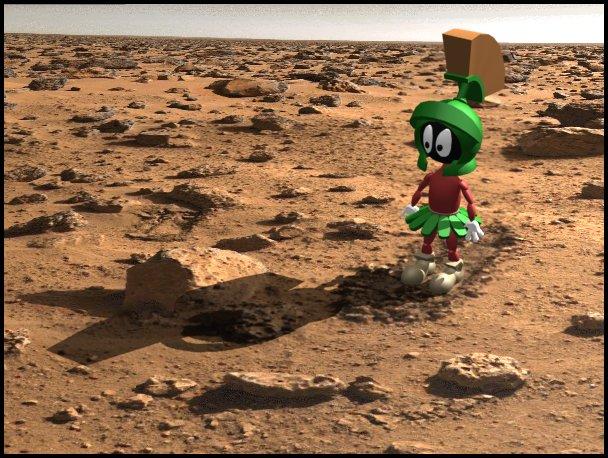 One, they already did this when we first went to the Moon, NASA censored them out, and tampered with the photos.  Also, see my previous blogs with the label "extraterrestrial" - in one instance a photograph from the Spirit rover caught a UFO in the sky.  The other point, is that their mentality may be different than ours.  They like to not be obvious, and present a puzzle - a bit secretive in nature.  This secretive nature was noted by Emanuel Swedenborg, who said they like to present a mystery to outsiders to stir up their curiosity, and often do not give a straight answer.  For the ones that tend to travel between solar systems, Swedenborg said this:


...I asked how they instruct their people. They said that they do not instruct them how a thing is, but instill some apperception of it, that hence a desire of knowing may be cherished and grow, which desire would perish, if they answered all questions. They added, that they suggest opposites also for the purpose that the truth afterward may better appear; for all truth appears in contrast with its opposite. (Heavenly Arcana, n. 7075).

They said that when they talk with men of their own earth, they also do so, and this with no intention of deceiving them, but to inspire thereby a desire for knowing; for when they suggest what is opposite, and in a manner conceal things, then a desire of knowing is excited, and thus from eagerness to find out about the things, the memory is enriched. (Heavenly Arcana, n. 7074).

Tell any child, that you have a secret about something, and it will drive them nuts.  I think that is what is going on here...except in this case, they are doing it to us.  How can NASA explain this one away?

CHANGES IN SECURITY CLEARANCE AT NASA

I think photos like the above took the government by surprise.  In 2007, the government ordered everyone at NASA to get a top secret clearance.  Some news organizations did not understand why.  Here is a quote from Security Obsession Drives 100 Scientists from NASA: Top Security Clearance Needed to Help Steer the Curiosity Rover?

Thanks to the zealous wackos at the Department of Homeland Security, back in 2007 during the latter part of the Bush administration an order went out that all workers at the Jet Propulsion Laboratory in Pasadena--an organization that is run under contract to NASA by the California Institute of Technology, had to be vetted for high security clearance in order to continue doing their jobs. Never mind that not one of them was or is engaged in secret activities (NASA is a rigorously non-military, scientific agency which not only publishes all its findings, but which invites the active participation of scientists from around the world). In order to continue working at JPL, even scientists who had been with NASA for decades were told they would need a high-level security badge just to enter the premises. To be issued that badge, they were told they would need to agree undergo an intensive FBI check that would look into their prior life history, right back to college.
Not surprisingly, many scientists and engineers at JPL took umbrage at this extreme invasion of their private lives. Neighbors and old colleagues and acquaintances, ex-spouses, etc. were going to be interrogated about their drug-use history, their drinking habits, their juvenile arrest records, their sexual orientation-all those things that prying agents like to get into when doing a security clearance background check--as if they were applying for positions in the CIA or the Secret Service.
...The cost of this idiocy, which was aggressively pursued to a final pyrrhic victory in the High Court by the Obama Department of Justice (sic), has been grievous, as some 100 veteran scientists at JPL have quit or taken early retirement, rather than open their lives to the FBI.
Take Amanda Hendrix. She tells ThisCantBeHappening!, “I left JPL after 12 years (and with a good position and lots of opportunities) because I was very unhappy about the new badging requirements, particularly since they didn't make sense to me for scientists like myself who require no access to top-secret-type materials. It was extremely disappointing to me that an institution like JPL would subject their long-time employees to such measures in order to keep their jobs.”
So why top secret clearance to drive the curiosity rover?  Its to get them to keep quiet on the photographs that are discovered and then promptly censored.  Not everyone at NASA knows this, for the way it works, this type of information is compartmentalized.  You only know if you have a need to know.  No, the government were not idiots in this case, they knew exactly what they were doing.

UPDATE: THE CASE OF THE MISSING JELLY DONUT

(UPDATE: Jan. 23, 2014) I saw this on the news, and a reader also pointed this one out to me. Somebody at NASA noticed a rock that "suddenly appeared" where it wasn't before in front of the Opportunity rover on Mars.  The rock is donut shaped, and NASA is not sure how it got there.  Here is the before image (Dec. 26, 2013) and after image: 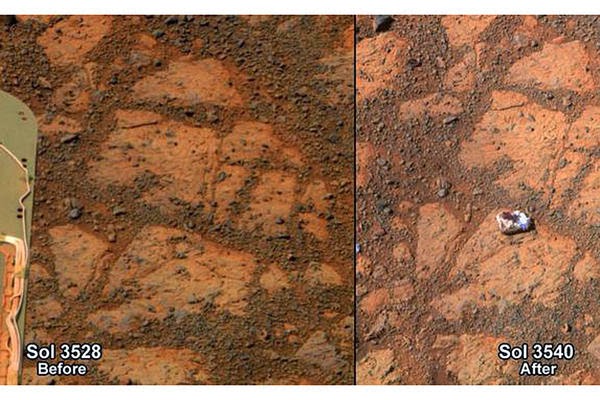 NASA cannot explain this one. It is either, (A) remnants of a meteor impact nearby, unlikely, or (B) a rock kicked up by the wheel of the rover.  Neither explanation is likely. And it is BIG NEWS.  Well NASA, please explain how a BIG BOULDER just went missing, and then REAPPEARS in a completely different spot. But no, we have to devote our attention to a small jelly donut rock that was possibly kicked up by the rover wheel.

So, was this rock kicked up by a rover wheel? Here is a quote from Steve Squyres from NASA ponders mysterious 'jelly donut' rock on Mars:


"It looks like a jelly donut," said Steve Squyres, the rover's lead scientist at Cornell University in Ithaca, N.Y., during a recent NASA event marking Opportunity's 10th year on Mars. "And it appeared, it just plain appeared, at that spot and we haven't driven over that spot."  The odd rock is located in a spot on "Murray Ridge" along the wall of Endeavour Crater where Opportunity is spending the Martian winter. A closer look at the rock using Opportunity's robotic arm-mounted instruments revealed even more surprises. "It's like nothing we ever seen before. It's very high in sulfur, very high in magnesium, it has twice as much manganese than anything we've seen on Mars," Squyres said with excitement in last week's Jan. 16 event. "I don't know what any of this means. We're completely confused, we're having a wonderful time."


So, the mystery deepens.  Not only did they not drive over that spot, but the chemical composition of the rock is unlike not only its surroundings but unlike ANY OTHER ROCK examined on Mars.  So does someone up there perhaps have a sense of humor? In the movie, Mars Attacks, Richie Norris watches the incoming news on Mars on TV at a place called, yes, DONUT WORLD. Here is an image from the movie: