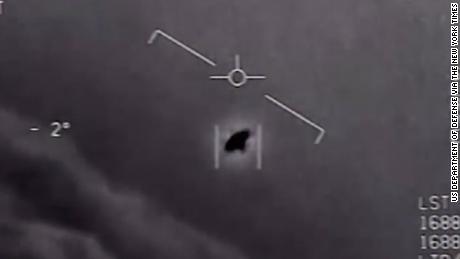 Still from video of from a U.S. Fighter tailing a UFO, released by the Department of Defense

So what was he doing there? According to Gary McKinnon, he was looking for evidence of UFOs and free energy technology. He was told by someone that there was a particular building in NASA that regularly "brushed up" photos that contained imagery of UFOs. He hacked into a system there, and that is exactly what he found - and the image was that of a cigar or cylindrical shaped UFO hovering above the earth's hemisphere.

To provide more detail, here is a video which discusses sightings of "probe-type" UFOs that seem to hover and bobble, staying stationary for a while observing things. One is over a power line.  And this reminds me: when I was in California, I remember my sister and her friend reported seeing something similar bobbing up and down above the electrical power line tower in the park behind our house. I at first did not believe her, but her friend said the same thing and she was dead serious. But the reason why I include it is there is more collected footage of the cigar-shaped UFOs:

It has been a long time since I have taken another look at the UFO phenomenon. With the advent of the internet, and youtube, it is now easier than ever to find evidence from all over the world from multiple witnesses. To muddy the waters, there are people who do put up fake videos to keep this under wraps, or to just get attention. Why am I looking at this now? Because Emanuel Swedenborg, a scientist of the 18th century, had clairvoyant abilities and encountered some of these extraterrestrials in the spiritual world. This took him by surprise, and this occurred long before the modern UFO phenomenon. Unlike other accounts, which combine these claims with some spiritual revelation, Swedenborg speaks of these encounters in his dry encyclopedic style of a detached scientist. But Swedenborg thought they originated from planets on our solar system. And many who read this, stop there and read no further. I honestly at first did not know what to make of it. That is, until the last couple of weeks, when I found footage and witnesses concerning UFO activity on the Moon and on Mars (see my previous blogs on extraterrestrials). We know these planets do not have a breathable atmosphere, but as UFO technology seems highly advanced above ours, Swedenborg's account is beginning to make sense.

Swedenborg speaks of most of these extraterrestrials as human like us, some shorter, but with no advanced technology in the sciences or writing. So is that true, that they were all more primitive in the sciences than us? Not quite. There is one particular group, which he associates with the planet Mercury, which had a keen interest to gather information out of other people's memory:


With what eagerness they search out and absorb knowledges, such as are in the memory raised above the sensuals of the body, was made evident to me by this, that when they looked into what I knew of heavenly things, they ran through them all, declaring instantly the nature of each. For when spirits come to man, they enter into his whole memory, and call forth there what suits them; yea, as I have often observed, they read its contents as from a book. (Heavenly Arcana, n. 6811)

There are many reports of abductions, where people report "missing time" - their memory has been wiped of that incident. We are not there yet: we are only beginning to understand how the brain works. Not only that, but more so than any other race, this race had knowledge from other solar systems:


The spirits of Mercury, above all others, possess knowledge both of this solar system, and of the earths beyond this in the starry heaven (Heavenly Arcana, n. 6812)


When the spirits of Mercury come to other societies, they find out from them what they know, and then depart; such communication also is given among spirits, that when they are in a society, if they are accepted and loved, all things which they know are communicated, and this not by any speech, but by influx. By reason of their knowledge, the spirits of Mercury are more haughty than others... (Heavenly Arcana, n. 6813)

These extraterrestials have so much knowledge, they place all of life in knowledges alone, thus Swedenborg observed they did not fully develop higher levels of thinking. In this area, they seemed to be a bit more limited than us. Swedenborg also observed they did not like to dwell with those from planet earth, as they viewed us as too materialistic and attached to earthly things. So from this and other passages, we can gather a bit of knowledge concerning their psychology and motivation:


1. The relationship is one way: extract knowledge.
2. An idea of "superiority" due to the enormous amount of knowledge gathered.
3. Inability to develop higher levels of rational thinking, or in making use of the knowledge, except to communicate that knowledge to others.
4. Lack of desire, even aversion, to commune with our materialistic society. Thus they would probably regard us as "primitive barbarians."

5. They would begin to show more interest in us if they thought we had knowledge that they didn't. Such as...maybe blowing up an atomic bomb?

And with that kind of profile, should a government encounter them in today's world, do you think they will just announce it to the public?  No.  It will be kept secret, and have the highest level of secrecy. Because there is much knowledge to be gained.

Another point Swedenborg makes: they love to wander about, going from solar system to solar system, collecting knowledge:


The spirits of the earth Mercury do not tarry long in one place, or in the sphere of the spirits of one world, but wander through the universe. ...Hence it is given them to wander, and everywhere to acquire to themselves knowledge. The spirits of that earth go in companies and bands, and when assembled together, form as it were a globe...That those spirits wander through the universe to acquire knowledges of things, was made evident to me also from this, that once when they appeared very remote from me, they talked with me thence, and said that they were then gathered together and were journeying out of the sphere of this solar world into the starry heaven  (Heavenly Arcana, n. 6925-26)

Swedenborg gives another explanation as for why they "form as it were a globe." But the description is remarkably similar to many UFOs that have been reported. And the last point to make: there are many other planets in the solar system that are inhabited by the human race:


Because of their thus journeying through the universe, and so being able to know more than others of the worlds and earths beyond the sphere of our solar system, I have also talked with them on this subject. They said that in the universe there are very many earths inhabited by men, and that they wondered that it should be supposed by any, whom they called men of little judgment... (Heavenly Arcana, n. 6927).

A remarkable statement, considering this was in the 18th century, long before current astronomers began discovering other planets orbiting other stars. Emanuel Swedenborg demonstrated on multiple occasions a clairvoyant ability. If he was right on those occasions, perhaps we should pay attention to these accounts. Because we will gain very little useful knowledge concerning these extraterrestrial cultures from all these UFO sightings on the internet.
Posted by Doug Webber at 12:03 AM