Swedenborg's Answer to Stephen Hawking: A LONGER History of Time 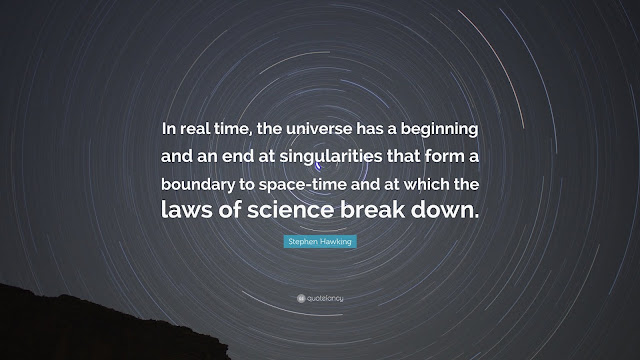 Stephen Hawking, a brilliant scientist and mathematician on black holes, for some reason has decided to make the jump from black holes and utter pronouncements on God lately.  Here is an article from CNET: Stephen Hawking: So here's how it all happened without God. So where do we come from? From God? No, here is what Chris Matyszczyk reports:

So are we all just quantum fluctuations?  Earlier, scientists were saying we are just a bunch of chemical reactions.  For they try to fit everything into what they can see and measure in the realm of physical light. The problem is, spiritual matters lie within, beyond the material.  It cannot be measured by science, any more that  "love" cannot be measured.

Yes, that is right. There is no scientific proof for such a thing as randomness and coincidence.  And yet, modern secular science assumes there is randomness.  That is an act of faith. The Oxford English Dictionary defines "random" as "Having no definite aim or purpose; not sent or guided in a particular direction; made, done, occurring, etc., without method or conscious choice; haphazard."

The important point here is that randomness means that there is no definite aim or purpose. If everything is due to randomness, everything is meaningless. So while in science they teach everyone about "cause and effect," Swedenborg fills in the missing gap: instead of cause and effect, there is end, cause and effect. The end is one's intention or will, the cause is the thought of how to execute your desire, and the effect is the act of doing it. And by extension, creation itself has an intention or purpose behind it, for we are a microcosm of the universe.


BEFORE THE BEGINNING OF CREATION


'If one believed that the universe had a beginning, the obvious question was what happened before the beginning?' he asked.
'What was God doing before He made the world? Was He preparing Hell for people who asked such questions?'
'The problem of what happens at the beginning of time is a bit like the question of what happened at the edge of the world, when people thought the world was flat,' he said.
He suggested that the idea of time running in only one direction 'like a model railway track' was misconceived and that combining of general relativity and quantum theory can allow time to act just like another direction in space.
'This means one can get rid of the problem of time having a beginning, in a similar way in which we got rid of the edge of the world,' he said.
Hawking asked his audience to imagine the beginning of the Universe is like the South Pole, with the role of time being played by degrees of latitude.
Just as asking what is south of the South Pole makes no sense, he argued, to asking what happened before the beginning of the Universe would become a meaningless question.

So is this true: what happened before the beginning of creation is a meaningless question? No, it is a very important question.  What Stephen Hawking is trying to point out here, is that according to the best theories of science, space and time are created things. Before the Big Bang, space and time did not exist.

So this discovery of space and time is a modern scientific discovery, right?  Wrong.  Long before science showed that was the case, that is exactly what Swedenborg was shown in his visions: before creation, space and time did not exist.  And the place that existed before space and time was one of eternity, and pure ideas: it is the spiritual world.  For what science does not know is that there are two worlds: the natural world which they study, and the spiritual world which preceded it.  And long before Einstein, here is what Swedenborg said in the 18th century, which was not from science, but by revelation from vision:


Although there is a succession and progression of all things in heaven as in the world, yet angels have no notion and idea of time and space, not even knowing what time and space are. We will speak now of time in heaven, and of space in its own chapter.
That angels know nothing about time, though all things move onward with them as in the world, without any difference at all, is because in heaven there are not years and days, but changes of state; and where there are years and days there are times, but where there are changes of state there are states. (Heaven and Hell, n. 162-163)

So there is no time or space in heaven. Angels have no concept of time. And to understand this, the thought needs to be elevated above natural things:


When anxiety on this account arose in my mind, I was elevated into the sphere of heaven and thus into the perception in which angels are about eternity, and then it was made clear to me that we must not think of eternity from time, but from state, and then we may perceive what from eternity is — as then happened to me. ...The natural man may suppose that he would have no thought, if the ideas of time, space, and material things, were taken away; for upon these is founded all man's thought. But let him know that the thoughts are limited and confined so far as they partake of time, space, and matter; and that they are unlimited and extended, so far as they do not partake of these things, since the mind is so far elevated above corporeal and worldly things. From this angels have wisdom, and such as is called incomprehensible, because it does not fall into such ideas as consist merely of worldly things. (Heaven and Hell, n. 167, 169)

Not only is there no time, but there is no space.  Things become present according to one's desire and thought.


All things in heaven appear in place and in space, just as in the world, and yet angels have no notion or idea of place and space. Because this cannot but appear as a paradox, I wish to present the matter in clear light, as it is one of great importance.
All going from place to place in the spiritual world is effected by change of state of the interiors, so that change of place is nothing else than change of state. In this way also I have been conducted by the Lord into the heavens, and likewise to the earths in the universe, and this as to my spirit, while the body remained in the same place. In this way all the movements of angels take place; hence they have no distances, and if not distances, neither have they spaces, but instead of them states and their changes. (Heaven and Hell, n. 191-192)

In the spiritual world, when you "feel" close to a person, that person actually becomes closer, and when you "feel" distant from another, they appear far away. Our internal emotional states and ideas become the new reality. And that there is an underlying reality where space has no meaning, is something that science has actually proven: it is a weird phenomenon known as "quantum entanglement".  Two particles, which have a similar state, are separated. Then a measurement taken on one has an immediate effect on the other particle, no matter how far distant it is.  The effect is instantaneous, faster than the speed of light. But the reality of it is, there is nothing traveling between them.  They exist in the same "space", because they have the same state. Just as Swedenborg saw with the angels in the heavenly world. Quantum entanglement is now actively being researched, as it promises to achieve faster than light communication. And completely secure from wiretaps, too. But this idea of quantum entanglement can extend further: for it may explain the phenomenon of clairvoyance.


THE DIVINE IS NOT IN SPACE, AND NOT IN TIME

For God to be omnipresent, means, He is outside of time, and outside of space. He is present with a person, or conjunction is effected, when one lives according to His will.  He will live in the hearts of those who are in a similar state. It is "quantum entanglement", on a universal scale. So maybe we are a quantum fluctuation, with someone fluctuating us. Swedenborg calls this spiritual influx.  There is not a single thought we have that originated from our own self. What we think is our thought, originated from the spiritual world, and ultimately God.


That the Divine, or God, is not in space, although He is omnipresent, and with every man in the world and with every angel in heaven and with every spirit under heaven, cannot be comprehended by a merely natural idea, but may by a spiritual idea. It cannot be comprehended by a natural idea, because in that there is space; for it is formed from such things as are in the world; and in each and all of these things, which are seen with the eyes, there is space. (Angelic Wisdom concerning Divine Love and Wisdom, n. 7)


All who die and become angels put off those two things proper to nature, which, as said above, are space and time; for they enter then into spiritual light, in which the objects of thought are truths, and the objects of sight are similar to the objects in the natural world, but correspondent to their thoughts. (Angelic Wisdom concerning Divine Love and Wisdom, n. 70)

So what is the problem with Stephen Hawking's view?  He is good at analyzing the laws that pertain to the effects.  The laws are perfectly capable of describing these effects.  But the origin of these laws of order?  No answer.  What happened before there was time?  That is supposedly a meaningless question.

(From the blog article, Has Stephen Hawking Made God Unnecessary?)

I found this time lapse video - where one year is compressed in less than five minutes. This compressed video took one full year to make and involved almost 7,000 photographs.  The music is called Cosmic Gate Feat. Emma Hewitt - Calm Down (Omnia Remix). When watching this, ask yourself: is this music, and all this world around us, just a random product of a bunch of "quantum fluctuations"?
Posted by Doug Webber at 10:30 PM