Swedenborg and Life on Other Planets: Mars, and the Moon 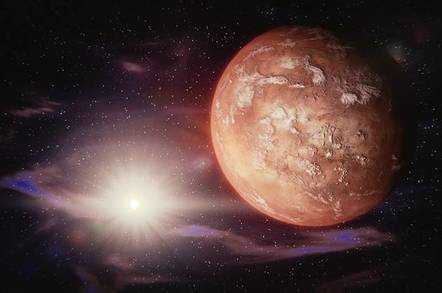 Emanuel Swedenborg, who had much to say on the afterlife and the spiritual meaning of scripture, spoke often of human spirits he had encountered who did not originate from our earth - which we now call extraterrestrials.  He also stated that many of them came from our own solar system. And these accounts are a stumbling block for many. So for this reason, I am diving in to some UFO reports, and there is plenty of evidence to choose from. I had earlier discussed his account of a race on Mars, and compared that with what we know about Mars now from recent space explorations - that it once had flowing water, it once had a thicker atmosphere, and NASA scientists that it most likely was able to host life in its distant past until it lost its atmosphere due to some unknown catastrophe. Since much of the information is classified, and government officials cannot officially speak of it, they do leak information out under the guise of fictional accounts - and one of them may be the Mission to Mars movie that came out in the year 2000.

So for Mars, I thought I had gathered the best available evidence.  But I was wrong.  See the following video - it shows a clip from Buzz Aldrin, astronaut of Apollo 11) who talks about a mysterious monolith discovered on the moon Phobos orbiting Mars (which may be just a rock), but more interesting are some photographs from a Russian satellite that was sent to the moon Phobos in 1989. Shockingly, it takes a picture of the moon Phobos and there is a shadow of a large disk like object on the surface. Whatever it is, it is huge. And right after that, the Russians mysteriously lost contact with the satellite:

Towards the end, there is a mysterious infrared photograph of the surface of Mars, which shows an unusual heat signature coming from what looks like to be tunnel like structures below the surface.


SWEDENBORG ON LIFE ON THE MOON

So recently scientists have uncovered evidence that Mars was able to support life in its distant past.  But what about the Moon?  We know it does not have an atmosphere.  And yet Swedenborg stated that the Moon was inhabited. He described the appearance of spirits he encountered from the Moon, who he said were few in number:


They appeared of a countenance not unhandsome, but their faces were longer than the faces of other spirits. In stature they were like boys of seven years of age, but of more robust body: thus they were dwarfs. I was told by the angels that they were from the Moon. (Heavenly Arcana, n. 9233)

And not only is the Moon inhabited, but also the moons of Saturn and Jupiter:

So while Swedenborg offers many insights on scripture and the human soul, as well as Christianity, quite honestly I - like many others - thought he was mistaken that there was life on the Moon. And in my previous post, I mentioned how Swedenborg could not actually see the planet where these extraterrestrial spirits came from.  So perhaps he falsely concluded other planets were inhabited based on the limited scientific knowledge of the time. So that was my theory. Until I found this video from the UFO Disclosure Project, testimony from Sergeant Karl Wolf of the U.S. Air Force who had top secret clearance. He speaks about what he saw concerning a NASA mission to the Moon in 1965 in Langley Virginia. It is followed by testimony from Ms. Donna Hare, a former NASA employee, who states that it was a practice of NASA to touch up photos to hide the existence of UFOs - including those on the Moon.


TESTIMONY FROM US PILOTS AND ASTRONAUTS

I decided to look a little further into this, and here is testimony again from Buzz Aldrin, astronaut of Apollo 11, who said they saw a UFO during their mission to the Moon:


And that is just the beginning. I found this excellent documentary, which gathers evidence from pilots and astronauts, concerning UFOs that have been tracking our aircraft, satellites, and space shuttle missions. Actually when I started to introduce this topic of extraterrestrials I probably should have started with this, as it has very good testimony:


At the end, they show remarkable footage of a UFO taken from a space shuttle mission. So if there are UFOs - of such frequency - reported by multiple witnesses (no less than pilots, astronauts, and FAA recordings - plus these numerous NASA videos) - where are they coming from? Perhaps they are closer to us than we think.
Posted by Doug Webber at 10:31 PM