Emanuel Swedenborg was right, and NASA is hiding it

Recently I started to address one of the main criticisms of the visions of Emanuel Swedenborg, that he saw that the other planets of the solar system were inhabited.  I felt Swedenborg may have been wrong in this area as well - obviously - these planets have no breathable atmospheres, right? But over the past couple of weeks my opinion has begun to shift on this as I started researching the UFO phenomenon and evidence of NASA tampering with public photos it has released from the space program - from missions funded with our U.S. tax dollars. Moreover, the body of evidence is growing that Mars has life on it, and we may have actually known this since the 70s from the Viking program (or probably earlier). If this is the reality, and if this reality does not change, then I see a need for a non-profit civilian agency that needs to start exploring space - one that is completely separate from the U.S. Government. However there may be hope, as there was evidently a split within the MJ-12 group, with half wanting the truth to be told, and the other half wanting to keep it secret. I suspect something in the middle was chosen: a very gradual disclosure of extraterrestrial life, something that will not shock the public, probably beginning with microorganisms. Microorganisms are things we can step on, but civilizations more advanced than ours? That makes us look small and insignificant. Hey wait! Compared to the size of the universe, we are small and insignificant, and the world does not revolve around us.

For the body of evidence that NASA has tampered with the photos, can be seen in these two previous blog entries, both of which I have updated with further information I was able to find recently (thank you, internet) - including prove positive evidence of underground tunnels and caverns on the moons, supposedly from lava flows.  And it was not that hard to find:

Swedenborg and Life on Other Planets: Mars and the Moon

However I was curious: just exactly what was (is) NASA hiding in those photos? I wanted to see if there were any leakers. I found plenty of disinformants. The leakers are harder to find.  Eventually I found this: a presentation by retired Commander Sergeant Major Robert O. Dean (U.S. Army). He apparently was granted "Cosmic" Top Secret Clearance, which is above Top Secret.  He has some of those uncensored NASA photos, which he shows in this presentation. Some of them, quite amazing, he got from the Japanese space agency. With the old military guard retiring, or dying, some of them felt that this was too important to take to the grave, and Bob Dean is one of them. And I don't see anything here that compromises National Security. It is something big, with compromises our world-view. I started to pay attention when he gave the following definition of NASA:

Bob Dean was initially angry when he discovered the amount of cover up, but when he realized just how much was being covered up...then he began to understand.  The average man on the street, and narrow religious mind sets who think they know everything, simply are not ready for much of this.  He has seen military men who were revealed the full truth of this literally break down and cry when they saw their world view collapse - and then had to be reassigned. Here is a video of a presentation he gave in Barcelona in 2009, which I will sum up in the points below it. I found this quite enlightening, and in line with what I began to uncover in my previous blogs:

After seeing the above video, and seeing my previous blogs, it is now evident what NASA is hiding: on those Apollo missions, the extraterrestrials made their presence fully known. While we looked upon landing on the Moon as part of a space-race against Russia, the extraterrestrials took it as an attempt to contact them. Or they were simply curious as to what in the world were we doing up there and found it quite entertaining. One of the things Bob Dean discusses is luminous phenomenon on the moon, especially near the Lansberg crater.  I was able to find the photograph he was displaying from a web site called LIGHTS OF CRATER LANSBERG A, which you can see for a full analysis of the following photos: 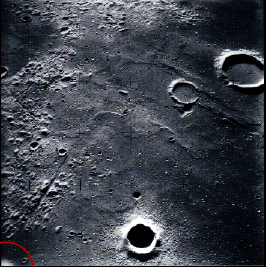 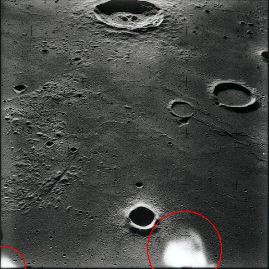 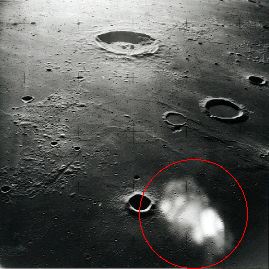 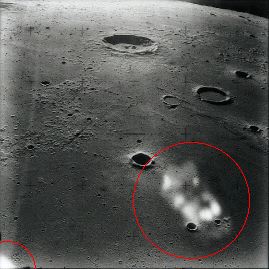 In the presentation, the strange light is sharpened a bit to show several glowing disks. But that is not all. Another surprise awaited NASA in the Voyager mission of 1980. As it was passing Saturn, this satellite uncovered evidence of huge UFOs moving in and about the rings of Saturn. And one was a cigar shaped UFO that is estimated to be 2,000 miles long and 400 miles in diameter. That is massive. Not only that, he discusses some other photos:


1. Mariner uncovered an artificial building on the surface of Mars near the equator.

2. The Soviet Phobos II spacecraft uncovered evidence of an underground city on Mars generating heat with its infrared camera.

3. An Apollo program photographed other disks and a cigar shaped spacecraft as it was approaching the moon.

Bob Dean has given several lectures, and evidently some in the military are calling him a "big mouth."  Remember how I said that extraterrestrials probably regard us as "primitive barbarians" in a previous blog? Bob Dean relates that when he was in Washington D.C. a plasma fusion physicist revealed to him that he had been working at a site in Nevada near Las Vegas, and on site he worked with two people on some projects for some time who were "not from here, but from up there."  After working with them for a while, he asked one of them point blank, what do you think of humans here?  The reply was: "Since you asked, we think you are a primitive, savage, and dangerous race." Swedenborg encountered similar views in his interactions with extraterrestrial spirits.

So what is important here? What is important, is that we elevate ourselves spiritually and morally. That is what is important. And that is the reason why God chose to become incarnate on our planet, to save the ones who were truly lost. If He picked our planet, that does not make us better, it makes us among the worst, for without His coming, all of mankind was doomed to destruction. Some extraterrestrials reportedly have a different view of Jesus, thinking He was one of them, but on that point, they are wrong -- something they will probably find hard to admit.
Posted by Doug Webber at 11:01 PM