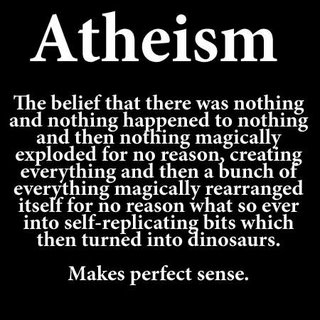 Emanuel Swedenborg was an 18th century scientist who is estimated to have an IQ of over 200. He pursued a life of science until in his 50s he started to experience a series of visions, until his mind was opened to see the spiritual world and the afterlife, and answered many dilemmas that Christianity cannot explain today. He had several clairvoyant experiences, one of which was confirmed by the German philosopher Immanuel Kant (see The Confirmed Clairvoyance of Emanuel Swedenborg). As a scientist and visionary, Swedenborg was in a unique position to clarify the relationship between the spiritual and natural world, and was given revelations that anticipated modern theories of space-time (see Swedenborg's Answer to Stephen Hawking: A LONGER History of Time).

As part of the many revelations Swedenborg received, he provides some interesting insights concerning not only naturalism but what becomes of atheists in the afterlife. Below is the summary view of the false idea of naturalism, followed by atheism as many become atheists by following naturalism.


THE FALLACY OF NATURALISM

Naturalism tends to prevail as most depend on knowledge obtained from the senses, and internal perceptions of the mind have been closed off or ignored. But when Swedenborg's mind was opened, he saw an entire other world in the spiritual realm that closely interacted with the natural world:


"That there is a spiritual world, in which spirits and angels are, distinct from the natural world in which men are, has hitherto been deeply hidden even in the Christian world. The reason is, because no angel has descended and taught it by word of mouth, and no man has ascended and seen it. Lest therefore from ignorance of that world, and the uncertain faith concerning heaven and hell resulting from it, man should be infatuated to such a degree as to become an atheistic naturalist, it has pleased the Lord to open the sight of my spirit, and to elevate it into heaven, and also to let it down into hell, and to present to view the quality of both. It has thus been made plain to me that there are two worlds, which are distinct from each other; one in which all things are spiritual, which is therefore called the spiritual world, and another in which all things are natural, and is therefore called the natural world; and that spirits and angels live in their own world, and men in theirs; and also that every man passes by death from his own world into the other, and lives in it to eternity" (Interaction between the Soul and Body, n. 3)


"There are two things which produce all the effects in the universe, Life and Nature, and they produce them according to order when life from within actuates nature. It is otherwise when nature from within brings life to act, which takes place with those who place nature, which in itself is dead, above and within life, and devote themselves wholly to the pleasures of the senses and the lusts of the flesh, and care nothing for the spiritual things of the soul and the truly rational things of the mind. Such persons, on account of that inversion, are they who are called the dead; such are all atheistic naturalists in the world, and all Satans in hell." (Interaction between the Soul and Body, n. 10)


THE MOTIVE AND END OF ATHEISTS

Swedenborg first explains that atheists fall into the deception of their own self-intelligence, to confirm what they favour from their own fallacies, or assumptions that cannot be proven true:

"But how man's state is changed from confirmations and thence persuasions, shall now be told, and in the following order:

As regards the First: Every thing whatever can be confirmed, and falsity more than the truth. What cannot be confirmed, when it is confirmed by atheists that God is not the Creator of the universe, but that nature is the creator of itself; that religion is only a restraint, and this for the simple and the common people; that man is like a beast, and dies like one; and when it is confirmed that adulteries are allowable, likewise clandestine theft, frauds, and cunning contrivances; that craftiness is intelligence, and wickedness wisdom? Who does not confirm his own heresy? Are there not volumes filled with confirmations for the two heresies that reign in the Christian world? Make up ten heresies, however abstruse, tell an ingenious man to confirm them, and he will confirm them all. If you afterwards see them from the confirmations only, will you not see falsities as truths? Inasmuch as all falsity shines in the natural man from its appearances and fallacies, and truth in the spiritual man only, it is plain that falsity may be confirmed more than truth." (Divine Providence, n. 318)

Thus atheists get caught up in their own fallacious reasoning, which more often then not is either based on false logic or misconceptions concerning religion. They also have a tendency to make only statements to the negative. Atheists tend to be in the love their own self intelligence: They who love themselves and the world above others have a tendency toward atheism, and hold spiritual matters in aversion, for the spiritual truths are opposed to what they love most.


"...they who regard earthly and worldly things as an end, that is, who love them above all things, hold spiritual things in aversion and almost abhor the very name of them. It is nearly the same at the present day. The learned of the world indeed believe that they would receive the Word more readily if heavenly things were exposed nakedly, and if it were not written in such simplicity. But they are very much deceived, for in each case they would have rejected it more than the simple minded, and would have seen in it no light, but mere thick darkness. For this darkness is induced by human learning with those who trust to their own intelligence, and on that account exalt themselves above others. That such things are hid from the wise and revealed unto babes, that is, to the simple, the Lord teaches in Matthew (xi. 25, 26) and in Luke (x. 21). It is also very evident from this, that they who are atheists and naturalists, as they are called, are such as are learned. This the world knows and they themselves know. (Heavenly Arcana, n. 8783)

And from their own self-intelligence, they will grab hold of fallacies and make them appear to be true, to favour what they love most. They will use this to attack spiritual truths:


"they who are in the loves of self and of the world see only such things as favor those loves, and call them truths, and through fallacies and appearances they also make them appear like truths; and afterward they see such things as agree with the principles they have adopted, which they love because they are from themselves. From this it is plain that both external and internal knowledges which are subjects of the memory, serve those who are in the above loves for means of confirming falsities against truths, and evils against goods, and thus of destroying the truths and goods of the church. For this reason the learned who are of such a character are more insane than are the simple, and with themselves deny the Divine, its providence, heaven, hell, life after death, and the truths of faith. This is clearly manifest from the learned of the European world at this day in the other life, where a great number of them in their very hearts are atheists; for in the other life hearts speak, and not lips." (Heavenly Arcana, n. 9394.2)

Because atheists deny the Divine, they support the idea of Naturalism, that is, all things of nature are produced from nature. Naturalism at this day is supported by many because they are simply unaware of how the spiritual world flows into the natural. And some support Naturalism since they do not want to ascribe evil things to God. But atheists who confirm themselves in naturalism against the Divine cannot be pardoned, especially those who use this idea to justify their sin:


"Some indeed are to be pardoned for ascribing certain visible things to nature, for two reasons — First, because they have known nothing of the sun of heaven, where the Lord is, and of the influx thence; and nothing of the spiritual world and its state, yea, nothing of its presence with man. ...The second reason is that they could not see how the Divine could produce all those things that appear upon the earth, where there are both good things and evil things, fearing to confirm themselves in this, lest they should ascribe evil things also to God, and lest they should conceive a material idea of God, and make God and nature one, and thus confound them. These are two reasons for pardoning those who have believed that nature produces the visible world by a power implanted by creation. On the other hand those who have made themselves atheists by confirmations in favor of nature, are not to be pardoned, because they could have confirmed themselves in favor of the Divine. Ignorance indeed excuses, but it does not remove confirmed falsity, for such falsity coheres with evil, and thus, with hell. Wherefore these same persons who have confirmed themselves in favor of nature, even to the separation of the Divine from it, regard nothing as sin, because all sin is against the Divine which they have separated and thus rejected; and those who in spirit regard nothing as sin, after death, when they become spirits, being in bondage to hell, rush into wickedness according to the lusts to which they have given rein." (Divine Love and Wisdom, n. 350)

And in the end, those who confirmed themselves in the falsehood of atheism ultimately closed off the higher regions of the mind that connected them with God, and thus were borne downward towards hell as their mind had focused on material and sensual things:


"To these things it is to be added, that those who had confirmed themselves in favor of nature from the visible things of the world until they became atheists, have been seen by me in the spiritual world; and that in spiritual light their understanding appeared open below, but closed above, because in thought they looked downward to the earth, and not upward to heaven. Over the sensual, which is the lowest of the understanding, appeared as it were a veil — in some flashing from infernal fire, in some black as of soot, and in some livid as of a corpse. Therefore let every one beware of confirmations in favor of nature; let him confirm himself in favor of the Divine, for there is no lack of material."(Divine Love and Wisdom, n. 357) 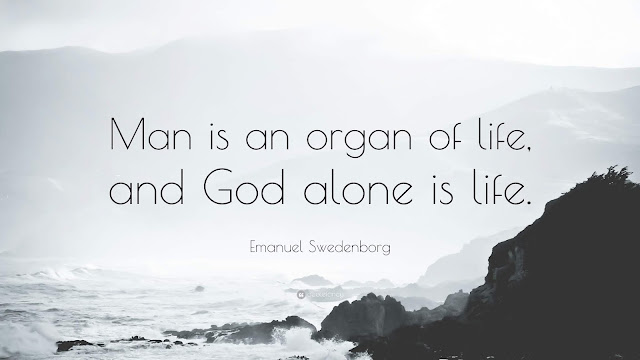