In the 18th century Emanuel Swedenborg experienced 27 years of waking visions to reveal to the world the reality of the afterlife, the spiritual sense of scripture, and the true doctrines of Christianity. Although he intended everyone to examine the truth for themselves from scripture, he inadvertently at times included clairvoyant information that can be verified by facts (see The Confirmed Clairvoyance of Emanuel Swedenborg). For example, it is now well established that the first 11 chapters of Genesis have parallels in the myths and writings of ancient Sumeria, which were discovered in the 19th century. Before their discovery, and long before the creationist-evolutionary debate, Swedenborg stated that the first 11 chapters were based on earlier writings which were mythical in character:


"There are in the Word, in general, four different styles. The first is that of the Most Ancient Church. Their mode of expression was such that when they mentioned terrestrial and worldly things they thought of the spiritual and celestial things which these represented. They therefore not only expressed themselves by representatives, but also formed these into a certain historical series, as it were, that they might be the more living... These particulars concerning the creation, the garden of Eden, etc., down to the time of Abram, Moses had from the descendants of the Most Ancient Church. (Heavenly Arcana, n. 66)

"...the historic narrative concerning the creation and concerning the first man, and concerning paradise, is a history so framed as to contain within it heavenly and Divine things, and this according to the received manner in the Ancient Churches. This manner of writing extended thence also to many who were outside of that Church..." (Heavenly Arcana, n. 8891.4)

For further details, see the earlier blog post Is Genesis Historical? A Revelation from Heaven.  Another was he predicted the content of the Hebrew midrash of the book of Jasher, which he states is much older than scholars think (see The Lost Book of Jasher, the Exodus, and Emanuel Swedenborg).

Combined with his other clairvoyant experiences that were verified by his contemporaries this is impressive. However I started to read again Swedenborg's extensive explanation of the book of Revelation and found another odd finding, which is hard to notice unless one uses a search engine or index of Swedenborg's writings.


THE SPIRITUAL MEANING OF THE SEVEN CHURCHES OF ASIA

From his waking visions under the guidance of the Lord, Swedenborg interpreted every single small detail in the Apocalypse, the final book of the Bible, and many still struggle to interpret its meaning. The work begins with seven epistles from Jesus to seven churches in Asia Minor:

The seven churches signify seven different types of Christianity where one can directly apply it to one's Christian walk of life (see The Symbolism of the Seven Churches of the book of Revelation for a summary). However every small detail in scripture has a spiritual significance, even personal and geographic place names. So what is the spiritual meaning about Asia, or Asia Minor? Swedenborg says this:


"Which are in Asia, signifies to those who from the Word are in the light of truth. Since by all the names of persons and places in the Word the realities of heaven and the church are meant, as said before, the same are signified by Asia, and by the names of the seven churches there, as will be manifest from what follows. They who are in the light of truth from the Word are meant by Asia, because the Most Ancient Church, and after it the Ancient, and afterwards the Israelitish, were in Asia; also because the Ancient Word was with them, and afterwards the Israelitish; and all the light of truth is from the Word." (Apocalypse Revealed, n. 11)

Although Swedenborg does not mention it, another reason why Asia has this significance is that it contains Mt. Ararat, the region where Noah's Ark rested after the flood, and Noah and his descendants represent the Ancient Church that succeeded the Most Ancient Church of the antediluvians. In Apocalypse Explained Swedenborg gives a more detailed account on how he arrived at this interpretation:


"In Asia, signifies those who are in the light of intelligence. This can be seen by a spiritual idea only, such as angels have, concerning the regions of this earth. When Asia is named, angels perceive the south; when Europe is named, the north; and when Africa, the east; and as by the "south" is signified the clear light of intelligence, so that light is signified by "Asia." This perception has been granted also to me, as often as I have been in the spiritual idea and have thought of Asia. Such is the spiritual idea of Asia, because the church was there in ancient times, and then extended over many regions there; therefore, those who are in heaven from that country are in the light of intelligence. For this reason, when Asia is thought of, a light like that which is in the south of heaven flows in." (Apocalypse Explained, n. 21)

This explanation is more detailed, which Swedenborg simplified in Apocalypse Revealed. It at first seems strange, but it is actually supported in prophetic interpretations of scripture, especially by those of the Seventh Day Adventists. In the prophecy of Daniel 11-12, it is recognized by several commentators that the "king of the north" eventually refers to the Roman Empire of Europe and the "king of the south" refers to the Ptolemaic Empire of Egypt. The latter had survived longer than its other rival, the Seleucid Empire, which covered Asia Minor. The war between the king of the north and south ultimately signify the corruption of the early Church, which happened when Rome became the primary authority over the more ancient eastern churches of the Middle East (see The Prophecy of Daniel 11-12 Explained, for my personal viewpoint on the prophetic interpretation).


CLAIRVOYANCE ON THE ANCIENT HITTITE EMPIRE

Focusing back on Asia, specifically Asia Minor, we now know that Asia Minor was once the center of the Hittite Empire. From The Hittites - Ancient History Encyclopedia:


"Little was known of the Hittites other than the references from the Bible and fragmentary documentation from Egypt until the late 19th century CE when excavations began at Boghaskoy (modern-day Bogazkale, Turkey) which was once the site of Hattusa, capital of the Hittite Empire... Hattusa was originally founded by the Hatti (an aboriginal tribe of Anatolia) in 2500 BCE, and their culture may have provided the basis for that of the Hittites.  This very important complex and those who built it along with their vast empire, however, remained almost unknown until their writings were discovered, first by the Irish missionary William Wright in 1884 CE, and then by the German archaeologist Hugo Winckler in 1906 CE."

Below is one map of the Hittite Empire, showing it covered portions of Asia and bordered the land of Canaan: 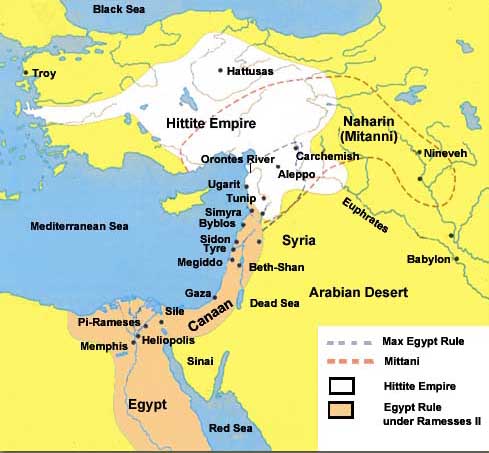 By 1912 Winckler found a huge cache of clay cuneiform tablets which were quickly deciphered. It was soon realized by scholars that they had discovered the empire of the Hittites which are mentioned multiple times in the Bible. Up until that time nothing was known of the Hittites, except also they happened to be another one of the inhabitants in the land of Canaan. They were in no way associated with the geographic region of Asia. The case for the identification is summarized in Biblical Hittites:

Apart from the similarity in names, the Anatolian Hittites were a powerful political entity in the region before the collapse of their empire in the 14th-12th centuries BC, so one would expect them to be mentioned in the Bible, just in the way that the ḤTY post-Exodus are. A stone lion relief found at Beth Shan, near the Sea of Galilee (now at the Israel Museum), dated to about 1700 BC, has been interpreted by professor Bill Humble as confirming this identification, since lions are often pictured in Hittite art. Moreover, in the account of the conquest of Canaan, the Hittites are said to dwell "in the mountains" and "towards the north" of Canaan — a description that matches the general direction and geography of the original Hittite empire, which had been influential in the region prior to the Battle of Kadesh.
Modern academics propose, based on much onomastic and archaeological evidence, that Anatolian populations moved south into Canaan as part of the waves of Sea Peoples who were migrating along the Mediterranean coastline at the time of the collapse of the Hittite Empire. Many kings of local city-states are shown to have had Hittite and Luwian names in the Late Bronze to Early Iron Age transition period. Indeed, even the name of Mount Zion may be Hittite in origin.


So, Swedenborg had absolutely no knowledge of this, as the Hittite Empire had essentially been forgotten until it was rediscovered in the 20th century. Now here is where things get interesting. If Asia signifies those who are in the light of truth as they were from the Ancient Church preceding Judaism, then the spiritual significance of "Hittite" should be similar as we now know they originate from Asia. And here is what Swedenborg states concerning the Hittites:


"There were many inhabitants of the land of Canaan, who are named in many passages of the Word and among them the Hittites (see Gen. xv. 20; Exod. iii. 8, 17; xiii. 5; xxiii. 23; Deut. vii. 1; xx. 17; Josh. iii. 10; xi. 1, 3; xii. 8; xxiv. 11; 1 Kings ix. 20: and other places). Most of these were from the Ancient Church; that this extended through many lands, and likewise through the land of Canaan... Among the better inhabitants of the land of Canaan were the Hittites, as may be evident from this, that Abraham dwelt among them, and afterward Isaac and Jacob, and had their burial-place there; also from their bearing themselves piously and modestly toward Abraham, as is very plain from what is related of them in this chapter (particularly in verses 5, 6, 10, 11, 14, 15). And thus by the Hittites, as by a well-disposed nation, is represented and signified the spiritual church, or the truth of the church." (Heavenly Arcana, n. 2913.1-2)

Swedenborg had no knowledge that the Hittites originated from Asia, only that they were part of the Ancient Church. And yet the spiritual meaning of "Asia" and "Hittite" is practically the same: Asia represents those of the church in the light of truth, and Hittite always represents those who are in the spiritual truth of the church. This is reaffirmed in another passage:


"There were remains of the church from ancient times still in the land of Canaan, especially with those who were called Hittites and Hivites. Consequently by those nations are represented the truths which were of that church." (Heavenly Arcana, n. 4429.3)

And again, similar to Asia the Hittite spiritually signifies the light of truth:

When explaining this passage of Ephron the Hittite among the sons of Heth, Swedenborg goes further:


"This verse treats of the new church that the Lord establishes when the former church expires; and the verses that follow treat of the reception of faith with them. A church among the sons of Heth is not treated of; but the raising up by the Lord of the spiritual church in general, after the former ceases or is consummated" (Heavenly Arcana, n. 2913.1-2)

And this is the exact theme of the book of Revelation - the consummation of the old Christian churches, and the establishment of a new spiritual Christian Church, signified by the New Jerusalem that descends out of heaven. This is something that Swedenborg could not have conceived on his own, and is thus evidence he was receiving heavenly revelations on the spiritual meaning of scripture. It is thus evidence that the Second Coming indeed has taken place in these new revelations, for which see Is the Second Coming a Physical Event or Spiritual Event?
Posted by Doug Webber at 12:24 AM