Angel Appears before thousands on top of a Coptic Church [+VIDEO]

Miracles rarely happen, and when they do, we should take note.  I just saw this, and it blows me away - a human figure of light appeared before thousands on top of an Orthodox Coptic Church in Warraq Egypt on December 11, 2009, which was caught by many on video cameras. I had previously blogged about a rare appearance of what appears to be an angelic light in The Light of an Angel caught on Video Tape, which healed a young girl who was dying on her hospital bed.  That was just a brief flash.  Compare it with this one, where it lasts for 3-4 hours, and is seen by thousands. Here is the first video, where the figure of light appears on top of the church among three crosses that are somehow glowing with golden light:

Part 2, the figure of light is now on top of the center cross. Note the cross of light suspended above the glowing figure in mid-air.

Part 3, this looks like a different part of the church:

Part 4, back on top of roof with the 3 crosses, towards the end you see it disappear in a pinpoint of light. Note the top of glowing figure has a golden hue, whereas below it there is a bluish hue:


Here is another one: a globe of light flying in the air above the crosses, which some witnesses had identified with a luminous dove:

This was reported in the news, and I have seen some pathetic explanations by skeptics that this was just a light of a tower behind the church.  That is clearly not the case here.  It moved between the domes on the roof. In the last video it is a figure of light on the church, that disappears into a pinpoint of light.  Thousands of people would not gather between 1 and 4am in the morning because of a light in a tower. Although a vague human form can only be seen in these videos, the first witness saw it coalesce into a human female form, which was identified with the virgin Mary:


The first person who saw the alleged apparition of Mary was reportedly a Muslim neighbour. He was said to be sitting at his local coffee shop when he apparently saw a strong light coming from the Coptic Orthodox place of worship. He and others are said to have observed the light condense into a female form. Mary allegedly appeared in luminous robes, in a pure white dress and a royal blue belt, with a crown on her head.

The Coptic Orthodox church regards it as a valid apparition.  From Apparitions of the Blessed Holy Virgin Mary at El-Warraq Coptic Orthodox Church, Greater Cairo, Egypt (which has more videos in Arabic as well):


The Bishopric of Giza announces that the Holy Virgin has appeared in a transfiguration at the Church named after her in Warraq al-Hadar, Giza, in the early hours of Friday 11 December 2009 at 1:00am. The Holy Virgin appeared in her full height in luminous robes, above the middle dome of the church, in pure white dress and a royal blue belt. She had a crown on her head, above which appeared the cross on top of the dome. The crosses on top of the church’s domes and towers glowed brightly with light. The Holy Virgin moved between the domes and on to the top of the church gate between its two twin towers. The local residents all saw her.
The apparition lasted from 1:00am till 4:00am on Friday, and was registered by cameras and cell phones. Some 3,000 people from the neighbourhood, surrounding areas, and passers-by gathered in the street in front of the church to see the apparition.

Looking at the last video one can see a bluish hue towards the bottom, and gold around where the head would be. What is the significance of this?  The Orthodox Coptic Church is very ancient, older than the Roman Catholic Church and was founded by the Apostle Mark.  I first started to study the Orthodox church when I discovered that their theology of how Jesus saved humanity is very similar to the New Church theology described to Emanuel Swedenborg in visions in the 18th century.  I described the Orthodox church a little bit in The Older Forgotten Branch of Christianity. They do not believe in the theology of "vicarious atonement" as Catholics and Protestants do - this I described a bit in The Error of Vicarious Atonement and Christus Victor, Pauline Christianity and the Dead Sea Scrolls.  I recently found a Coptic Church near where I live, and talked to a deacon of that church.  Rather than stressing an immediate "conversion" or just faith, they stress a life long process where we should all try to imitate the image and life of Jesus Christ. After repentance, God's grace is given that begins to fill our heart with love.  This spiritual process is very similar to what I described in The Three Steps of Spiritual Development. After talking with that deacon, I just happened to stumble upon these videos.

And why does the angel appear as a female with a crown? It may not necessarily be the virgin Mary, but an angel who represents the church itself, from the vision of John in the Apocalypse:


Now a great sign appeared in heaven: a woman clothed with the sun, with the moon under her feet, and on her head a garland of twelve stars. Then being with child, she cried out in labor and in pain to give birth. And another sign appeared in heaven: behold, a great, fiery red dragon having seven heads and ten horns, and seven diadems on his heads. His tail drew a third of the stars of heaven and threw them to the earth. And the dragon stood before the woman who was ready to give birth, to devour her Child as soon as it was born. She bore a male Child who was to rule all nations with a rod of iron. And her Child was caught up to God and His throne.
Then the woman fled into the wilderness, where she has a place prepared by God, that they should feed her there one thousand two hundred and sixty days. (Rev. 12:1-6)

The vision is symbolic: it refers to the future dawn of the New Church, where one God is worshiped, where the Lord's humanity is regarded as Divine: the God Man, or Divine Human, which is the reason for the ritual of the communion. The revelation is opposed by the dragon, which represents those who divide God into three persons and stress salvation by faith alone. This is described in more detail by Swedenborg in Apocalypse Revealed and Apocalypse Explained.

There are a number of miracles mentioned in the Bible which can be compared to this one.  Skeptical scholars always try to explain them away as embellishments, or mistaking natural phenomenon.  And they still do - despite the evidence for the angelic apparition, they just try and try to explain them away. This is because skeptics are in a state of denial of everything, despite the evidence sitting in front of them. I should mention here, that it is better to have a spiritual faith drawn from the truths of scripture, than from miracles: it is more stable and longer lasting:


Now Thomas, called the Twin, one of the twelve, was not with them when Jesus came.
The other disciples therefore said to him, "We have seen the Lord." So he said to them, "Unless I see in His hands the print of the nails, and put my finger into the print of the nails, and put my hand into His side, I will not believe." And after eight days His disciples were again inside, and Thomas with them. Jesus came, the doors being shut, and stood in the midst, and said, "Peace to you!" Then He said to Thomas, "Reach your finger here, and look at My hands; and reach your hand here, and put it into My side. Do not be unbelieving, but believing." And Thomas answered and said to Him, "My Lord and my God!" Jesus said to him, "Thomas, because you have seen Me, you have believed. Blessed are those who have not seen and yet have believed." (John 20:24-29)

So here are some Biblical manifestations that can be compared to the angelic form that appeared in Egypt in 2009. Notice they are always forms of bright light:

The  Burning Bush of Moses

Now Moses was tending the flock of Jethro his father-in-law, the priest of Midian. And he led the flock to the back of the desert, and came to Horeb, the mountain of God. And the Angel of the LORD appeared to him in a flame of fire from the midst of a bush. So he looked, and behold, the bush was burning with fire, but the bush was not consumed. Then Moses said, "I will now turn aside and see this great sight, why the bush does not burn." (Ex. 3:1-3)

A Pillar of Fire by Day, a Pillar of Cloud by Night

The Glory of God's Presence on Mt. Sinai

The sight of the glory of the LORD was like a consuming fire on the top of the mountain in the eyes of the children of Israel. (Ex. 24:17)

Appearance of an Angel to Daniel

Now on the twenty-fourth day of the first month, as I was by the side of the great river, that is, the Tigris,
I lifted my eyes and looked, and behold, a certain man clothed in linen, whose waist was girded with gold of Uphaz! His body was like beryl, his face like the appearance of lightning, his eyes like torches of fire, his arms and feet like burnished bronze in color, and the sound of his words like the voice of a multitude. (Dan. 10:4-6)

The Transfiguration of Jesus

Now after six days Jesus took Peter, James, and John his brother, led them up on a high mountain by themselves; and He was transfigured before them. His face shone like the sun, and His clothes became as white as the light. And behold, Moses and Elijah appeared to them, talking with Him. Then Peter answered and said to Jesus, "Lord, it is good for us to be here; if You wish, let us make here three tabernacles: one for You, one for Moses, and one for Elijah." While he was still speaking, behold, a bright cloud overshadowed them; and suddenly a voice came out of the cloud, saying, "This is My beloved Son, in whom I am well pleased. Hear Him!" (Matt. 17:1-5)


Appearance of an Angel at the Tomb of Jesus

And behold, there was a great earthquake; for an angel of the Lord descended from heaven, and came and rolled back the stone from the door, and sat on it. His countenance was like lightning, and his clothing as white as snow. And the guards shook for fear of him, and became like dead men. But the angel answered and said to the women, "Do not be afraid, for I know that you seek Jesus who was crucified. He is not here; for He is risen, as He said. Come, see the place where the Lord lay. (Matt. 28:2-6) 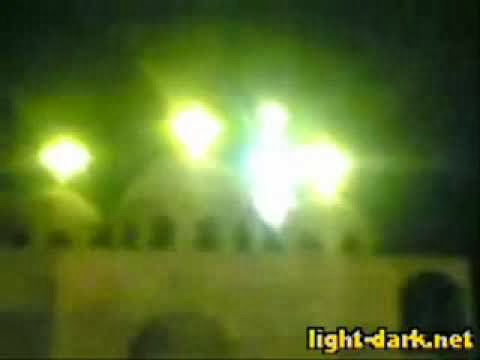