Is Genesis Historical? A Revelation from Heaven 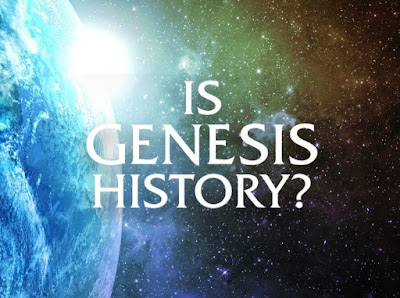 
"There are in the Word, in general, four different styles. The first is that of the Most Ancient Church. Their mode of expression was such that when they mentioned terrestrial and worldly things they thought of the spiritual and celestial things which these represented. They therefore not only expressed themselves by representatives, but also formed these into a certain historical series... These particulars concerning the creation, the garden of Eden, etc., down to the time of Abram, Moses had from the descendants of the Most Ancient Church" (Heavenly Arcana, n. 66)

Note that Swedenborg wrote this in the mid-18th century. The Sumerian tablets which contained earlier versions of the stories of Genesis, were discovered in the 19th century. The parallels are unmistakable, even though Christian apologists will continue to deny the relationship, for which see the following:


Below chart is a summary of the major parallels: 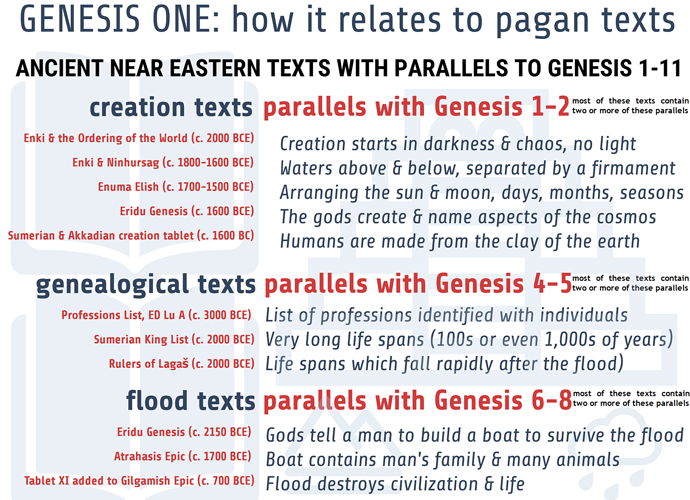 Here is an interesting chart, showing that if the years of the patriarchs before the flood are converted from base 10 to base 60, the number of years closely match the Sumerian king list: 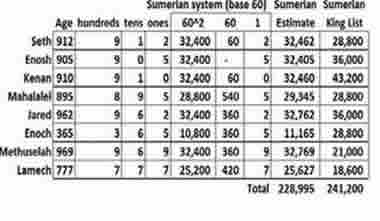 For many Christian apologists these parallels pose a problem, which one can see from some of the links above. But in the revelations given to Emanuel Swedenborg, it is revealed that before Judaism there were revelations given to the peoples of the Ancient Near East. The revelations were given in two phases, which Swedenborg terms as "The Most Ancient Church" and "The Ancient Church." In the ancient style of writing, everything was described and taught in terms of mythical stories:


"...the historic narrative concerning the creation and concerning the first man, and concerning paradise, is a history so framed as to contain within it heavenly and Divine things, and this according to the received manner in the Ancient Churches. This manner of writing extended thence also to many who were outside of that Church, who in like manner devised histories and involved arcana within them, as is plain from the most ancient writers. For in the Ancient Churches it was known what such things as are in the world signified in heaven, and the events were not of such consequence to them as to be described, but instead the things which were of heaven." (Heavenly Arcana, n. 8891.4)

This form of mythical writing is used in Genesis 1-11. True history only begins with Genesis 12. The meaning of the symbolic myth is described in detail in the work Heavenly Arcana:


"They who do not think beyond the sense of the letter cannot believe otherwise than that the creation, which is described in the first and second chapters of Genesis, is the creation of the universe, and that there were six days within which were created the heaven, the earth, the sea, and all things which are therein, and at length man in the likeness of God. But who cannot see, if he ponders on the particulars of the description, that the creation of the universe is not there meant... These and other such things in that history must needs at first thought appear paradoxical to those who entertain any doubt concerning the sanctity of the Word, and afterward induce them to deny the Divine therein... Angels, when the first chapter of Genesis is read, do not perceive any other creation than the new creation of man, which is called regeneration. This regeneration is described in that history: by paradise the wisdom of man created anew; by the two trees in the midst thereof the two faculties of that man, namely, the will of good by the tree of life and the understanding of truth by the tree of knowledge. And that it was forbidden to eat of this latter tree, was because the man who is regenerated or created anew, must no longer be led by the understanding of truth, but by the will of good, and if otherwise, the new life within him perishes" (Heavenly Arcana, n. 8891.2,3)

Thus the arguments of Christian apologists and skeptics over the first eleven chapters of Genesis are insignificant and irrelevant. A revelation has been given that not only explains the symbolic meaning of the Bible, but also Divine providence foresaw this controversy and gave an answer to the problem long before it became such a public issue of debate. And this is just one of many new revelations given concerning Christianity. Again, Emanuel Swedenborg published his writings a century before these archaeological texts were discovered, showing that he was indeed receiving clairvoyant revelations concerning Christianity and the true spiritual meaning of the Bible. Should we not be paying more attention to them?
Posted by Doug Webber at 7:51 PM