The Mistranslations of the Psalms

I have published yet another work, The Mistranslations of the Psalms, in which I took the King James Version, converted it into modern English, and then documented all the mistranslations by creating a hyperlink of each correction which is linked to the original Hebrew definition. This was the prelude to the work The Symbolism of the Psalms. It was necessary because it is very clear in the visions of Swedenborg that each Hebrew word has a distinct spiritual meaning, so every effort here was done to use a distinct English word for each Hebrew word when the context allowed for it. The notes are extensive, and as it was extensive I had to separate this out from the commentary. Here is the book cover: 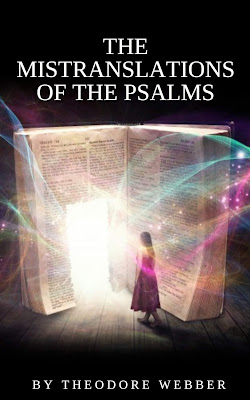 The poetic structure of the Psalms is restored, and the rationale for the stanza structure of each Psalm is fully documented in The Secret Code of the Psalms. This work has an interesting side story, back in 2014 when I had started it someone had a clairvoyant dream about it, which is described in this blog post: A Clairvoyant Dream of a New Translation of the Psalms.

So, unlike all other translations, this translation is fully documented. All the variants with the LXX (the Greek Septuagint) are also covered in the footnotes. You can now take this and compare it with any other Bible translation, to see just how closely the translators followed the Hebrew. There are some modern translations out there that do a rather bad job, as they do not understand the importance of each Hebrew word. If you send me a message (see the bottom left corner of this blog post) I will go ahead and send you a PDF of the entire book for free.

There are mistranslations, or translation inconsistencies, in practically every Psalm. As an example here is what Psalm 23 looks like: 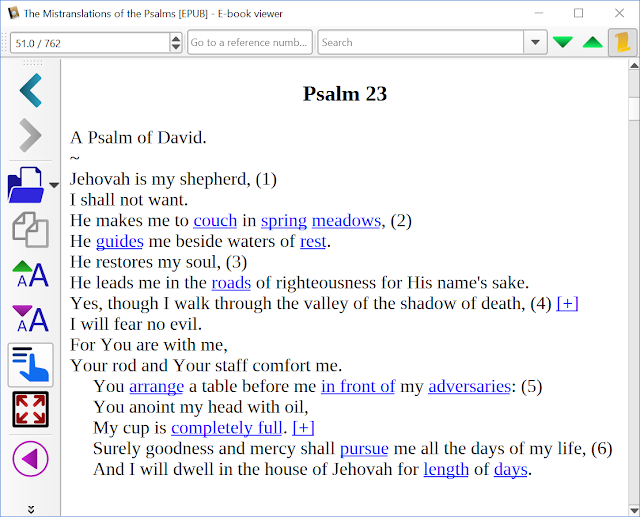 Each blue underlined word is a hyperlink to the original Hebrew definition. Most translations have LORD in place of the name Jehovah, but the word "Lord" is used for the Hebrew word Adonai and the Jews started to use that word in place of Jehovah's name in order to keep God's name sacred. But the name Jehovah and the word Adonai have distinct spiritual meanings: Jehovah is the Lord as to Divine love, and Adonai refers to the Lord in human form.

Most translations have "still waters" but it literally says "waters of rest" - referring to the rest of peace, that one has after conquering the temptations of the falsehoods of evil.

In verse 5 most translations have "enemies" but this is translated as "adversaries." Again, there are two distinct Hebrew words here: "adversaries" are evils that attack what is good, and "enemies" are falsehoods that fight against truths.

In verse 6 most translations have "forever" but in Hebrew it literally says for "length of days." Again there is a very specific meaning for this: width has reference to truth, as the width of the path allows for walking and walking signifies living by truth, and length has reference to good because as one walks in the truth one is led towards good - and this continues forever, even to eternity.
Posted by Doug Webber at 10:08 PM