The Angelic Dreams of Children 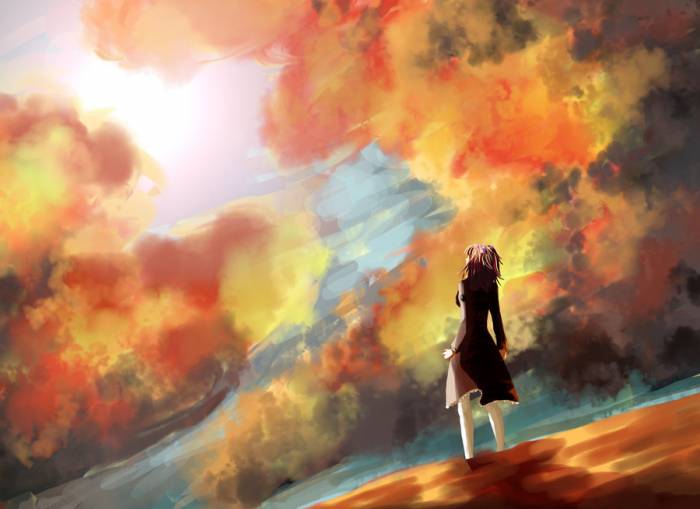 Children, in their love and innocence, often have dreams that are highly significant.  However many never tell them and forget them, unless they know there is someone willing to listen to their dreams.  Many times dreams are just reflecting our thoughts or worries, but at times certain information comes across that indicates the dream is an actual communication or vision from the spiritual world.  In the 18th century Emanuel Swedenborg revealed the hidden spiritual meaning of scripture through waking visions for a full 27 years.  However he explained that dreams are often another means of communication, but were more symbolic and indirect:


"There are three kinds of dreams. The first kind come from the Lord mediately through heaven; such were the prophetic dreams, spoken of in the Word. The second come through angelic spirits, especially those who are in front, above, at the right, where are paradisal scenes; from thence the men of the Most Ancient Church had their dreams, which were instructive (see n. 1122). The third kind come through the spirits who are near when a man is sleeping, which are likewise significative. But fantastic dreams are from another source.

"That I might fully know how dreams flowed in, I was put to sleep, and I dreamed that a ship came laden with delicacies and savory food of every kind. The things in the ship were not seen, but were stowed away. Upon the ship stood two armed guards, besides a third who was its captain. The ship passed into a kind of arched dock. So I awoke and thought about the dream. The angelic spirits, who were above, in front, to the right, then addressed me, and told me that they introduced this dream..." (Heavenly Arcana, n. 1976-77)

"Dreams, also, which flow in through heaven from the Lord, never appear otherwise than according to representatives. He therefore who does not know what this or that thing in nature represents, and especially he who is entirely ignorant that anything is representative, cannot but believe that they are only comparisons, such as every one uses in common speech. They are indeed comparisons, but such as correspond, and are hence actually presented in the world of spirits, when the angels in the interior heaven are conversing concerning spiritual and celestial things of the Lord's kingdom." (Heavenly Arcana, n. 5115.3)

The following two dreams are one that a child had, which I think are both significant.


THE FIRST DREAM OF AN ANGEL

In this particular dream, the child sees she is in a new house of a new neighborhood.  The house looked the same on the outside, but on the inside it was bigger, and it was all colored white.  The couch had expanded, and was much bigger, expanding across the breadth and length of the house.  She sees her mother in a red dress, and she is pregnant.  She gives birth to a child, but the child then rapidly grows until she is about nine years old, and she became bigger than her.  She was wearing a white flowing dress, had white smooth skin, blue eyes, and golden hair.  She did not speak, but gave letters to every one.  However to her sister she gave a scroll.  Her sister opened the scroll, and it was a picture of Jesus walking through a field.  The angel then spoke:


Jesus was crucified on a Thursday, and he rose from the dead on Sunday.  And on Tuesday, he walked through a field. 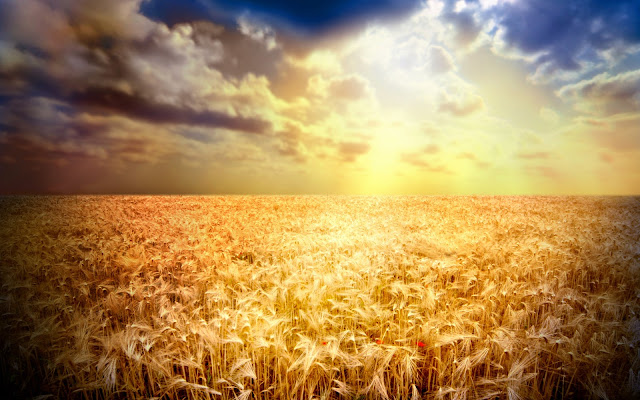 Everyone was surprised in the dream as there was no story in the Bible that mentioned Jesus walking through a field on Tuesday.  We discussed the dream, and as we were discussing it, I could see there was some doubt in her face.  As she was explaining it again to another person, she then said, "The young girl said Jesus was crucified on Friday..."

I interrupted and asked, "Did the young girl say that Jesus was crucified on a Thursday or a Friday?"

At this point I realized the dream was significant, for those who research the chronology of the gospels have determined that Jesus was not crucified on a Friday.  From Friday to Sunday morning is not three days.  Orthodox and Catholic teachers, who were unfamiliar with Jewish feast days, had assumed that when scripture said Jesus was crucified before the Sabbath, by "Sabbath" was meant the seventh day of the week or Saturday.  However, what they forgot to consider was that Jesus was crucified on the Passover, and the day after the Passover was also a Sabbath day of rest:


So in the solar-lunar Jewish calendar, the Passover falls on the fourteenth day of the first month.  The day after is the feast of unleavened bread. This is the fifteenth day, and no matter what day of the week it is, it is a Sabbath day of no work.  So if Jesus was crucified on a Passover that fell on Thursday, no matter what the day after would still be a Sabbath.  But it is a slightly different Sabbath - it is the Sabbath of unleavened bread.  And indeed, if one reads the gospel of John carefully, one can determine that this is the Sabbath that the gospels are talking about:


When Jesus had received the sour wine, he said, “It is finished,” and he bowed his head and gave up his spirit.Since it was the day of Preparation, and so that the bodies would not remain on the cross on the Sabbath (for that Sabbath was a high day), the Jews asked Pilate that their legs might be broken and that they might be taken away. (John 19:30-31)


When the gospel of John adds that the Sabbath was a high day, it is talking about one of the sabbaths of the Jewish feast days - in this case the feast of unleavened bread.  And this is something that no child will learn in Sunday school, much less a Catholic school, as it would go against the Catholic tradition of Good Friday.

So Friday was a high Sabbath, followed by the Sabbath on Saturday, thus it was only on Sunday morning that the women could come to the tomb to prepare the body as Jesus was hastily buried.  This is only way that the prophecy of Jonah could have been fulfilled:

So, why mention that Jesus walked through a field on Tuesday?  I don't know, but probably its a hint referring to the feast of unleavened bread that follows the Passover.  There is quite a bit of research done on this here: Was Jesus crucified on Wednesday, Thursday, or Friday?, but that web site concludes Friday must be it by making the strange argument that the Feast of the Firstfruits (the sixteenth day of the month) must land on a Sunday.  It also miscounts the number of days and nights, and only a Thursday crucifixion would work for that.

As to why the dream was given?  Today is a Thursday, and tomorrow is July 3rd which is a holiday in the United States - just in the same way that Friday would have been a "high sabbath" or holy day if it fell on the 15th day of the first month after the Passover.  There are other details that were also given in this dream that provided knowledge of facts that this child was unaware of, but those are unnecessary to cover here.

In a later portion of the dream, the girl heard a voice say about her, "I like that girl."  She then heard that young girl say, "I like her too."  She could not see her, but thought she was resting on one of the rafters near the ceiling.  So it is perhaps one of her guardian angels  as Swedenborg stated each person has two guardian angels - one for the will, the other for our thought.  These angels are in constant battle with two evil spirits that try to subvert each person towards evil and falsehood.  It is from this spiritual battle or equilibrium that each human being has free will to choose.


THE SECOND DREAM OF AN ANGEL

This dream came to the same child, but earlier, around May of this year.  I wasn't sure what to make of it at first, but after hearing the other dream today I thought I would mention it as well.  In this dream, she is with her sister, and they are standing on top of a layer of golden clouds.  The thought then comes to her, that it is being decided as to what level of heaven each of the girls would go to.  In front of her, she sees that there is a pyramid rising out of the clouds.  From the top of the pyramid, there is a beam or column of light ascending into heaven. 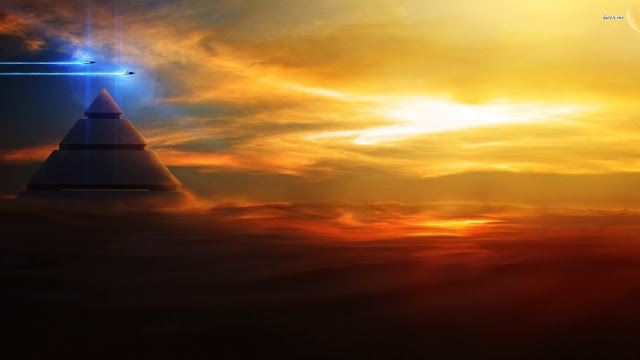 A decision is then made concerning her sister.  She then sees her sister go to the top of the pyramid, enter the beam of light, and she ascends into heaven. For her, however, a decision has not been made yet. The dream ends.

This dream was interesting, as unknown to her, I had just ordered and read an interesting book: The Hidden Records, by Wayne Hershel: 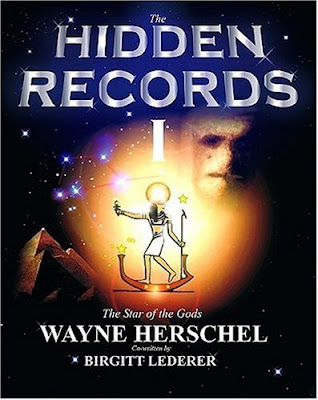 The book is well researched, and concerns some ancient star alignments contained in the geometry and location of the Pyramids of Egypt, as well as other ancient monuments around the world.  It corrects some of the research done in the book The Orion Mystery: Unlocking the Secrets of the Pyramids by Robert Bauval. There is a rather interesting story behind this particular dream, but that is a subject matter perhaps for another day.  With dreams, it is sometimes rather easy to pick up the thoughts of others, no matter how hard they attempt to keep it a secret...