I have been blogging a bit on UFOs, and found evidence that NASA brushes out UFOs and tampers with them before releasing them to the public.  And now...evidence that somebody is tampering with UFO videos posted on Youtube.  This is quite a surprise.  This means Google got some sort of take down order from an agency, Google gave access, and the video was left up on Youtube but was tampered.  This is crossing a line.

And for this revelation, we have FOX news to thank. Yes, FOX news of all media outlets.  See the following clip from FOX news, which shows three UFOs in triangular formation, changing direction, tailing space shuttle Atlantis. The video of course comes from NASA.  So NASA was probably faced with a problem: they edited their own video, and then realized a portion of it was put out on Fox News. And copied up to Youtube. To make the tampering consistent, someone was actually brave enough to go on Youtube and brush out the UFOs in the Youtube video.  Wow.

Listen to the dialog, and watch the video comments - this is very funny:

Here are the uploader's comments:


Uploaded on Sep 25, 2006
I CANT BELIEVE I'M SAYING THIS: THANK GOD FOR FOXNEWS. THIS VIDEO IS VERY REVEALING. Pay close attention first of all at 00:56-01:40 (2 objects, pulsating, changing directions, then Nasa guy saying: "over the years we have chased many, many, many of these things" and always finding that they didnt post us any answer." PAY CLOSE ATTENTION AT 2:00 and2:30. "ASK THE QUESTION, ASK THE QUESTION" "NO" and then the woman in the background appears to be laughing! at 2:30 she says "WHAT COULD THESE THINGS POSSIBLY BE, I MEAN, ALOT OF PEOPLE ARE WRITING AND SAYING" then the other guy comes and goes "SATTELITES!" she acts surprised: "SATTELITES? COULD THEY BE SATTELITES?" the chick again is asking questions: "But I dont recall seeing this in recent missions, is this just something that happens frequently and is not reported" the NASA astronaut says "occasionally, on my second mission one of these floated by" and he holds up a little tiny wrench...This is beyond ridiculous

So, do not trust the media on this issue...but WAIT. We have the original image from the video at http://en.wikipedia.org/wiki/File:Image_ufo_atlantis.jpg. Of course, if someone tries to edit that Wikipedia will of course keep track of the change and the ip address. Here is the image, just in case that image somehow "disappears": 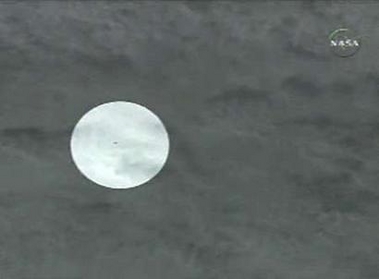 Sounds like to me we should vote for cutting the budget at NASA? And setup a privately owned space exploration agency? This disinformation has been going on for over 50 years.  All paid for by U.S. taxpayers.  So when looking at these UFO and extraterrestrial videos on Youtube, check the following things:


1. Watch for disinformation, where a video showing absolutely nothing is taken as "evidence" of a UFO or extraterrestrial life.
2. And not just that, watch out for Youtube video tampering.  This was a surprise, and can be confused with #1 above.

Thanks FOX News! People will now keep an eye out for this.  And I really have to complement FOX News for not questioning the invasion of Iraq before the war started.  I have to bring this up as I have put up some videos on UFOs here on the blog.  Many of those videos on Arthur M. Young were taken down earlier.


THESE UFOS JUST WILL NOT GO AWAY

Some of these UFOs have a habit of tagging along with planes or following them. They were first noticed during World War II, and at that time were known as "Foo fighters," evidently curious about the plane battles going on over Europe.  They also like to tag along high speed military planes.  A few of them are just trying very hard to get noticed: here are a couple of videos, where the UFOs decide to "pop in" at an air show, and cause the plane to crash:

And now another air show, this time in Russia. Notice the similarity, a very fast small moving object moves underneath one of the wings of the plane, causing it to crash:

Accidental or intentional?  Not sure.  But if its happening at an air show - two separate ones - obviously they are trying to get noticed.  Or send back a message to the military.  See The Secret UFO War.  If you ask me, the government will only admit publicly to UFOs in the case where it would like to invent a cause to go to war, once we run out of so-called "terrorist" nations to go to war against.  And that is very sad.