Largest Mass Sighting of a HUGE UFO: the Phoenix Lights

As I pour through the data on UFOs, especially contactee reports, I want to leave no doubt in the mind of any skeptic that we are being actively visited. I want to move past the sightings and get to the contacts. But there is just one last sighting I want to discuss - what if a huge mile wide UFO just hovered over a major U.S. metropolitan city, and was witnessed not by one, not two, not a hundred, but THOUSANDS of witnesses? It would be over, right? The government would come out and say we are being visited, right?  Well no. One of the largest mass sightings of a huge UFO took place in Phoenix Arizona in 1997. There was never such a mass sighting like this ever. I decided to concentrate on this one event, because the evidence is enormous. All we need is one instance, and it is over. This sighting became known as the "Phoenix Lights" and was researched by Lynne D. Kitei, M.D. for 7 years before she published a book on it. It woke many people up.

On the evening of March 13, 1997 a mile wide V-shaped formation of strange lights silently glided over the state of Arizona - it was witnessed by commercial pilots, air traffic controllers, police officers, active military, and thousands of citizens. It is estimated that 10% of the entire state of Arizona saw this. It wanted to be seen, and followied highway I-17 so it could be seen by the most amount of people. Lynne D. Kitei published a documentary on the event, which has won several awards. So for any skeptic, here is the documentary [UPDATED 11/28/15, second time]:

In case that documentary disappears, here is another copy:


THE GOVERNMENT AND MEDIA DENIAL

You would think in the face of such a mass sighting, the government would just jump to investigate it. It didn't. Instead, you see this ridiculous pattern of denial. And the media? They wanted to ridicule anyone who brought it up. But the public fought back, until the media was forced to admit it...but lately they republished the false story that it was just a bunch of "flares" - an old story that was disproven many years ago. Here, I want to concentrate on the government pattern of denial for this mass sighting, and how peer pressure and ridicule was attempted so no one would ask questions. This is based on a standard policy of non-disclosure. They know they are here. They don't want to reveal what they know, nor how they are reverse engineering the technology. Nor do they want the public to know they have made contact. It is obvious from how the government reacts. In the witnesses of the Phoenix Lights, they are still wondering what is going on. You can figure out what is going on if you just dig enough, but it takes searching. As to why the governments have a policy of denial, the reasons are discussed in The NASA Study on Extraterrestrial Contacts. I want to make it clear: while this ETI contact was of the positive kind, a continued cover-up will be harmful to the population if an ETI contact shows hostile behavior. I started to discuss that previously in Physical Evidence for UFO Abductions

The mayor of Phoenix was asked about the lights and he responded "there are no UFOs over Phoenix." But it was not stated the lights were a UFO - why would the major just immediately deny there was a UFO? Councilwoman Frances Emma Barwood later brought up the question at the city council of Phoenix and was met with dead silence - no one wanted to answer. They then moved on as if she did not ask the question. An assistant city manager approached her after the meeting and said, "You should not have asked that question." When she asked why, he told her that the mayor's office did not want to deal with it and make a public statement. The media then vilified and ridiculed Barwood in the press. In reaction to this, the public called in and bombarded the city with phone messages. About 700 people were called back and they all described the same thing. Only one - a small kid - said he saw the lights of an airplane in the sky. And the media published THAT story hoping that this mass sighting would go away. It didn't, and this event became well known in the public news. Barwood then sent a letter to Senator John McCain (at 27:28). Senator John McCain then sent a responding letter to the National Archives - which did nothing, because all they do is file the letter in storage. Later, the Governor of Arizona Fife Symington held a press conference where he said they finally found the culprit of the Phoenix lights - and then they brought out a staff member dressed as an alien to make a joke out of it: 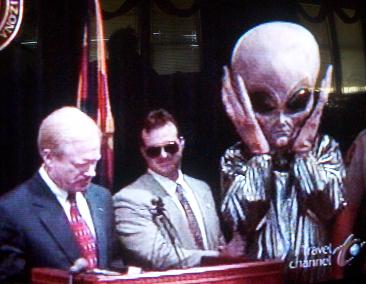 The citizens of the State of Arizona were furious with the Governor for doing this and were very angry. Here you have this large object going over a large metropolitan city, invisible to radar, bypassing our air defense and the government just ridicules thousands of people who reported it. I think he knew he made a mistake, and here is a subsequent press conference (years later) where he says the craft was definitely NOT flares, and was NOT man-made:


After the event the military had released a disinformation story stating that they were "just flares" that they released over the mountains. This ignores thousands of eye witness testimony which stated it was not flares, not an airplane, but a large V-shaped object flying at a low altitude along highway 17. Even though multiple witnesses discounted the flare explanation, this exact same story has popped up again in the mainstream media, stating that the Phoenix lights have been explained. They are lying. This was a large UFO sighting of a craft that may be extraterrestrial. There is nothing of our world that was the size of this thing. Even a member of the military stated that the object was not a set of flares. This exact same disinformation story has been repeated in the media recently again, stating that the Phoenix lights of 1997 have been explained. They are again lying, or have done very poor research investigating witness testimony. Video analysis of the Phoenix lights of 1997 eliminate flares as a possible explanation.

What about a top secret military craft? We have nothing that large that flys at low altitude without making a sound. And if it was top secret, they are not exactly going to parade it in front of the entire state of Arizona. Not only that, at the time two jets from the military airforce base were scrambled to investigate the object. When the jets returned and landed, an unidentified crewman had to help a pilot out of his jet because he was so frightened by what he saw. He said:


"One of the pilots stated that they had a visual on it, they've got gun camera film of it, they had no radar tape of it. It scared the hell out of them."

A more complete quote below. There was complete panic at the Air Force Base near Phoenix: 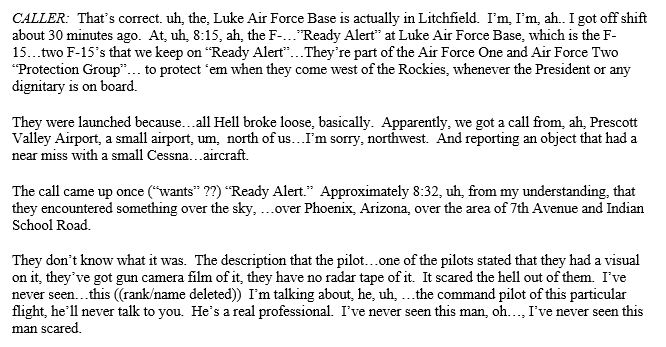 A military witness says he is not aware of any military procedures of what to do in case a UFO is encountered, but he mentions the Firefighter's Guide to Disaster Control, which is endorsed by FEMA - there is an entire section of how to respond to a UFO sighting and what to do in case of a UFO crash. What is not so publicized is they have crashed several times - and the military has recovered these crafts.

An expert who studied the videos said he preferred to use Occam's Razor - going with the simplest explanation, it was an extraterrestrial spacecraft. The video data of the lights eliminate all other natural explanations. Similar crafts with amber orbs have appeared in Belgium, the Soviet Union and Mexico. Triangular formations of lights have appeared in Illinois and New Jersey... it just goes on and on. It is a worldwide phenomenon, and there is some NASA footage included of flying saucers. The video discusses interesting evidence of ancient sightings throughout history.

For those of you wishing to investigate the Phoenix Lights further, go to The Phoenix Lights Network. Lynne D. Kitei who has done excellent research that proves one of the people who made a sighting may have been abducted.  They have "missing time" - their memory was erased of the event. That goes to show that this craft wasn't just taking a "sight-seeing" tour. They may have been scouting out the city to look for good prospects for abductions. I previously discussed this in the blog Physical Evidence for UFO Abductions. See this: PHOTOGRAPHIC EVIDENCE OF A MISSING TIME CASE.

I was not going to post this....but I would like to bring up the movie Night Skies.  It is supposedly based on a hypnotic therapy sessions of "Richard," a truck driver who was driving through Arizona some time around the time of the Phoenix Lights. He was found in almost a catatonic state. I have been unable to verify if "Richard" exists, and perhaps it was just a marketing ploy for the movie. However when I saw Lynne Kitei's article above, I decided to mention it. The film is a bit creepy. Its an abduction with missing time, which if true, goes horribly wrong - normally people are abducted without harm, and never know the better. As Richard is a war veteran, he carries a hand gun. As with other accounts I have seen, hand guns and shot guns are useless. There are indications they can read minds, that is also mentioned in this movie. In this movie, one has to be aware that many portions of it are fictional. But there is some underlying truth behind it, perhaps drawn from a composite of other abduction cases retrieved under hypnosis therapy.

I strongly recommend the citizens of Arizona to file FOIA request on this Phoenix Lights event. And if you experience missing time, go see a hypno-therapist. Here is a trailer for the movie: