The X-Men Prophecy of the Coronavirus Pandemic and Quarantine

In the previous post A Clairvoyant Dream and Prophecy of the Coronavirus Pandemic I explained how a highly symbolic dream referenced a series of fictional stories in the X-Men comics that predicted events before it happened, similar to how the fictional novel Futility (or Wreck of the Titan) predicted the sinking of the Titanic years in advance.  The book The X Prophecy explained this in detail, covering events from 1981 to 2020, and it was published before the coronavirus pandemic broke out in November of 2019.

The dream is focused on the grave of Elena, where Elena was Russian, and it was referencing the death of fictional character Illyana who is also Russian.  Illyana dies from an infection of the Legacy Virus, which targeted her lungs so that she could not breathe.  This was discussed in detail in the previous post A Clairvoyant Dream and Prophecy of the Coronavirus Pandemic.

The dream has multiple layers of meaning, and I surmised that the grave of Elena was an indirect reference to the death of the fictional character Cypher, otherwise known as Doug Ramsey. In one chapter I had written this:


"The white castle of the dream represents the land of death and rebirth in the Slavic myth of paradise. In the X-Men comics we find a parallel story concerning the death and rebirth of Doug Ramsey. In the original dream, the flag of Elena on top of the castle is a grave marker for Elena who had died a long time ago. Elena is represented by Kitty Pryde of the X-Men who becomes friends with Doug Ramsey. Doug dies saving Rahne the werewolf (New Mutants #60). Afterwards Doug’s grave becomes the focal point of subsequent stories, and there are some indications that the grave marker of Elena in the dream may be referencing the grave of Doug Ramsey."

The reason why I suspected this is because Doug Ramsey is ultimately resurrected from the grave by the sorceress Selene, and Selene is perhaps the origin of the name Elena (see comment in the previous post A Clairvoyant Dream and Prophecy of the Coronavirus Pandemic).

So, exactly how does Doug Ramsey die, and is it related in some way to the later death of Illyana due to an infection from a virus bioweapon? His death, as referenced in the book, is described in the issue New Mutants #60, and at the time I regarded it as merely a confirmation that the dream was clairvoyant, but I did not want to think it was related to any future event. The fictional story of the X-Men mutant Doug Ramsey, otherwise known as Cypher, in many ways is a symbolic representation of my events in my own life and my name happens to be Doug. These kinds of weird coincidences do happen. Consider the TV reporter reporting on a man hunt for an unknown robber: 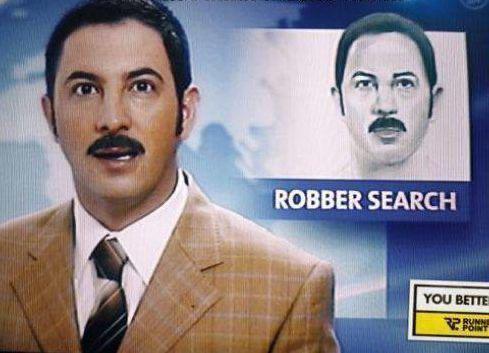 However in writing the book I yet again was unaware of the symbolic significance of the death of Doug Ramsey: Doug dies after having been killed by an evil genetic scientist known as "Animator" who had been running lab experiments on animals. These experiments on animals were taking place on a remote island. After the New Mutants land on the island they are attacked by the hybrid animals who are under the control of the genetic scientist known as Animator. The X-Men mutant Dani Moonstar attempts to distract them by projecting an image of the scientist, but she is then attacked by a bat creature, after which the mutants are all subdued and captured: (from New Mutants #59, January 1988): 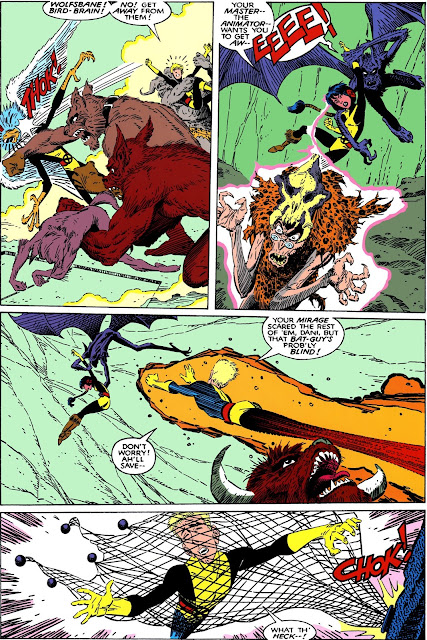 Doug Ramsey is killed by Animator as the mutants escape from their captivity in the lab. This is described in the next issue where its cover shows Dani Moonstar mourning over the body of Doug. And next to her is the bat creature (from New Mutants #60, February 1988): 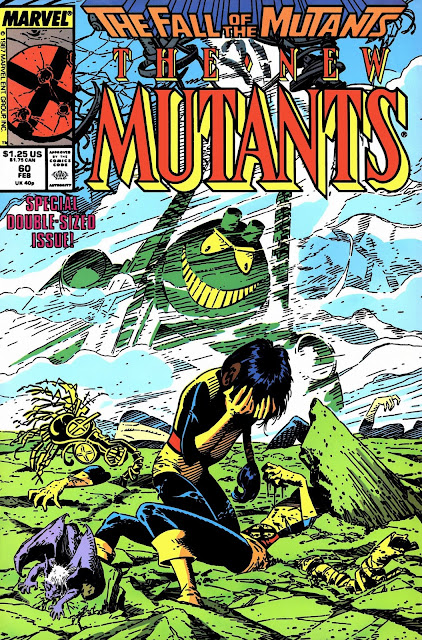 Scientists now know the coronavirus originated from bats. Thus similar to the death of Illyana, the death of Doug Ramsey represents those who die from the coronavirus pandemic. And I hope that's it, especially considering I live in New Jersey next to the current epicenter in New York. The genetic scientist known as Animator who killed Doug Ramsey had been doing unethical research on animals, as explained by his boss Cameron Hodge who does not trust him (from New Mutants #60, February 1988):: 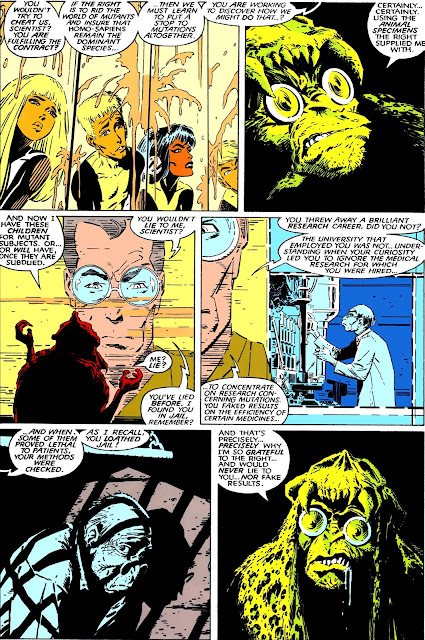 He was employed by a University. As explained in the previous post, university researchers did a study on bat coronaviruses at the University of North Carolina and it determined it showed "potential" to infect humans (from A SARS-like cluster of circulating bat coronaviruses shows potential for human emergence): 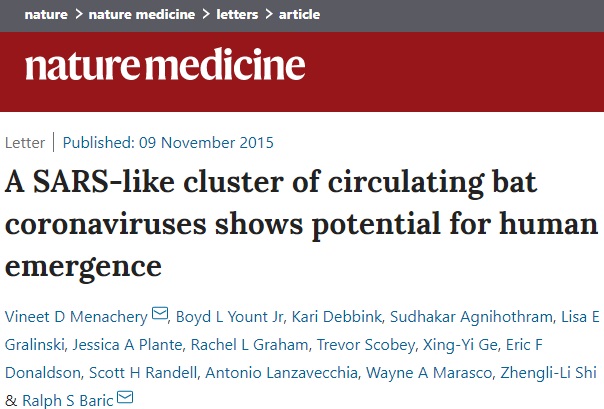 And if you look at the credentials of Zhengli-Li Shi, the person came from the Wuhan Institute of Virology from China, near the origin of the current coronavirus pandemic. This article was published in 2015, long before the outbreak.

Later, as explained at the end of the book The X Prophecy, Doug Ramsey is brought to life by the sorceress Selene. He remains under Selene's control until his true memories are brought back after the robot Warlock uses the soulsword of Illyana to strike him (from New Mutants 3rd series #8): 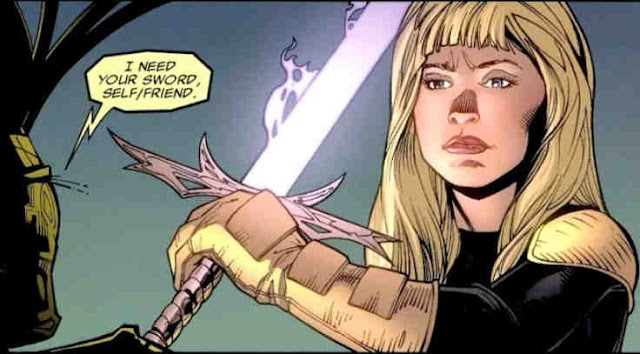 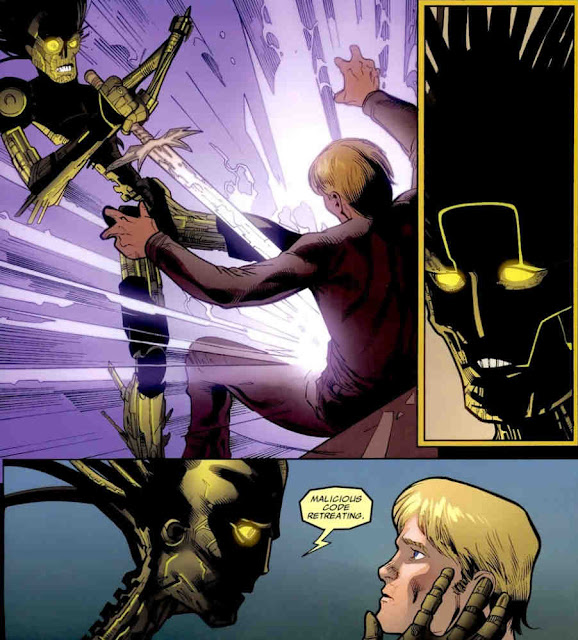 Swedenborg explains that a "sword" signifies to fight from the truth. Here the soulsword of Illyana is symbolic - it represents the truth that the clairvoyant dream was a warning concerning the current coronavirus pandemic, something I only realized in the past few days. Illyana who gives the sword was the one who had died from an infection of the Legacy Virus which shutdown her lungs.

Although Doug Ramsey returns to normal and joins the X-Men team, he still carries a fear about his own death. He then has a nightmare in which he explains his fear to a psychologist, only for the psychologist to rip off his face and reveal that he is the Animator. Doug wakes from the nightmare, and to remove his fear Dani Moonstar suggests they should return to the island "Paradise" where Animator had killed him so he can face it. The X-Men team agree to visit the island, and Doug explains to the team he has begun to interpret and decipher dreams (from New Mutants 3rd series #38, April 2012): 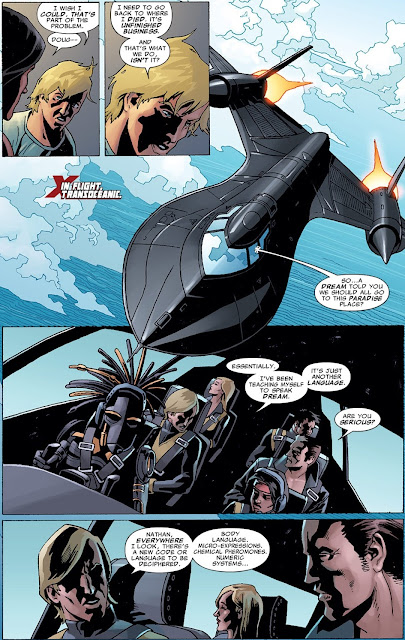 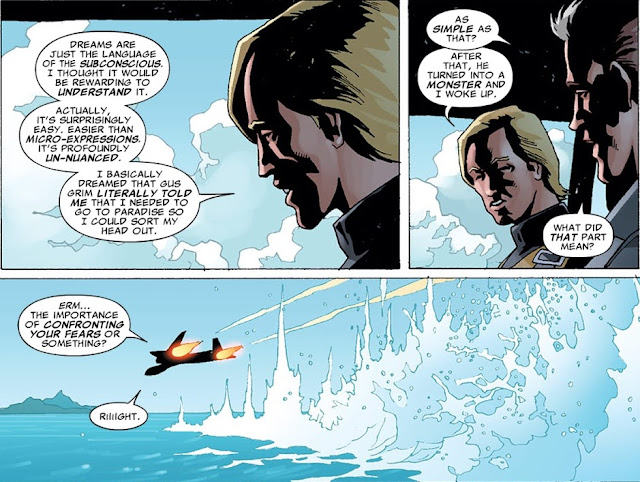 There are a number of other parallels between Doug Ramsey and myself explained in the book The X Prophecy -- going much beyond a mere coincidence -- but this is one I had missed. I had been interpreting dreams for many years long before I knew anything about these X-Men comics, and it took a dream to point me to this. This particular story though now has more significance: when they arrive at the island, the team becomes infected by a virus after becoming scratched by a bird like creature. The virus had been left on the island where it infected the animals by the genetic scientist Animator: 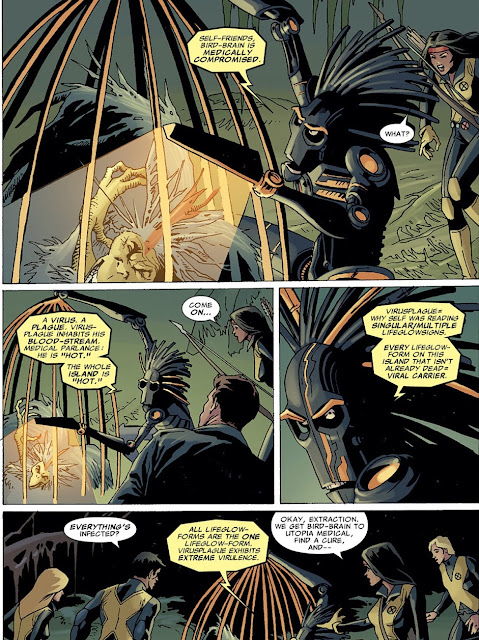 The X-Men then have to remain in quarantine on the island in order not to infect others. The robot Warlock explains that the virus cannot be allowed to escape the island since the virus is more contagious than any other known virus and is a "Global Health Hazard Class One": 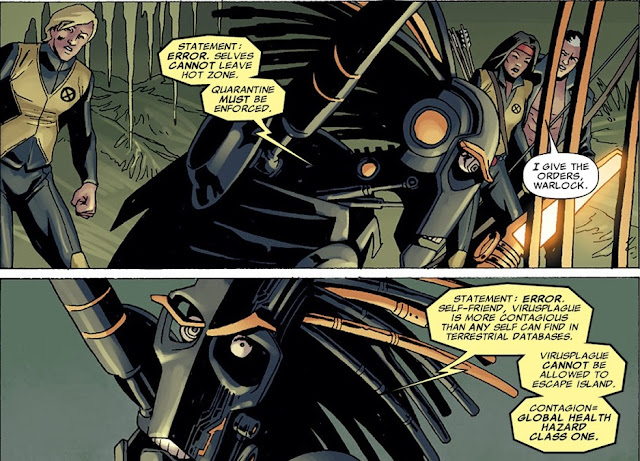 They of course arrived to the island by jet plane, and with the coronavirus pandemic many airline flights between countries have become suspended.

In the end, Warlock and Doug combine into a single entity known as "Douglock" and they use a "techno-organic" virus to counteract the virus of the Animator. At one point they show the microscopic shape of the virus (from New Mutants 3rd series #40, April 2012):

Now compare the above image with the image of what a coronavirus looks like (from 2019 Novel Coronavirus (2019-nCoV) Update: Uncoating the Virus):

Now this is just uncannily bizarre.

So to sum up what we have here: a clairvoyant dream of a child described scenes from old X-Men comics that neither the child nor myself had ever read. The dream interpretation pointed me to a character named Doug Ramsey who dies and later has a dream of his own death. Doug Ramsey, like myself, becomes involved in dream interpretation. His own death contains direct references to a bat creature and a coronavirus pandemic that requires quarantine.

And if that were not enough, the dream explicitly references the death of Illyana who dies of a virus infection that attacks her respiratory system so that she cannot breathe, and she dies. Similarly, Dr. Moira MacTaggart who had treated Illyana becomes infected and she must also go into quarantine (see A Clairvoyant Dream and Prophecy of the Coronavirus Pandemic).

Is this weird?  Of course it is.  And it certainly was not planned this way, the book The X Prophecy was published in early 2019 long before the coronavirus outbreak.

After I published and shared this post, someone who has very accurate clairvoyant dreams and who had not seen this post shared a dream with me: I was at risk from dying due to the coronavirus. However if I got a shot, I would survive it.

This could possibly mean I should get a flu shot, to build up immunity against the flu. However I looked it up, a flu shot will not help against the coronavirus: A flu shot won't prevent coronavirus, but it could help our response to the outbreak. However it can indirectly help, as it will help avoid an ER visit and reduce the load on hospitals, and at this time it is best to avoid any unnecessary hospital trip. So maybe its some other shot medical researchers will develop.

The dream is interesting, because the following scene which I had omitted from the original post shows Douglock injecting the virus creature on the island with a techno-organic virus shot: 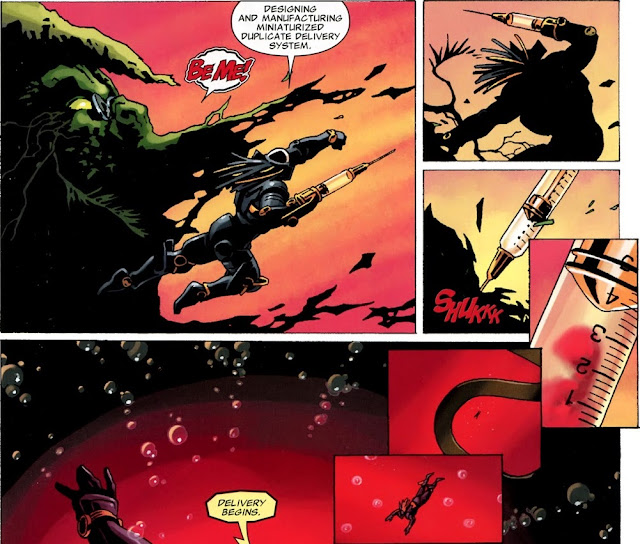