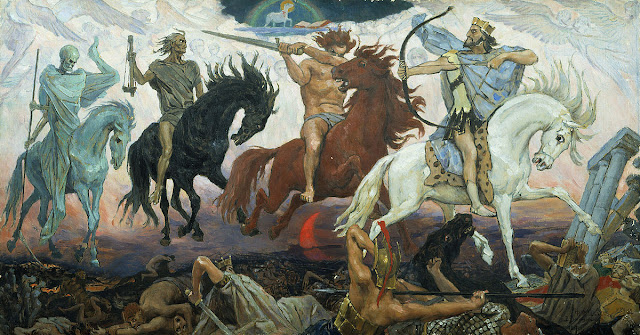 Due to the present coronavirus pandemic, I am seeing an interest in the meaning of the prophecy of the four horseman of the apocalypse, as explained in the post The Prophecy of the Four Horsemen of the Apocalypse.  The Bible, in general, is concerned more about our spiritual life than our physical life.  The fourth horse, which represents the punishment of plague, is called death, and ultimately represents spiritual death in the afterlife after truth has been destroyed (represented by the red horse) and a state of famine which signifies a lack of good (represented by the black horse). When we disregard spiritual truth and follow falsehood, good then declines by which we have conjunction with the Divine. The final state is then spiritual death, and this occurs when we block the internal Divine influx in our soul by rejecting good and truth, upon which our spiritual life depends. Hell, in the other life, is the state of spiritual life that souls prefer who are selfish - it is falsehood which becomes darkness, and hatred which becomes burning fire. When there is a lack of truth and good in the church, spiritual death prevails, and then a new revelation is given to establish the New Church, which is the Second Coming (see Is the Second Coming a Physical Event or Spiritual Event?).


I call heaven and earth to witness against you today, that I have set before you life and death, blessing and curse. Therefore choose life, that you and your offspring may live, loving the LORD your God, obeying his voice and holding fast to him, for he is your life and length of days, that you may dwell in the land that the LORD swore to your fathers, to Abraham, to Isaac, and to Jacob, to give them. (Deut. 30:19-20)

The promised land here is not the land of Israel.  It is the promised land of heaven, God's true heavenly kingdom, and the country of Israel was a representation of that. The Jews were God's people only as long as they represented the true spiritual church.

And Jesus said not to fear physical death, but one should be in fear of spiritual death:


And do not fear those who kill the body but cannot kill the soul. Rather fear him who can destroy both soul and body in hell (Matt. 10:28)

In the other life, it is not God who condemns, but it is our own evil desires which condemn ourselves. Those who love evil, hatred and revenge, or are constantly jealous of others, they are attracted to the place that is most agreeable with their desire.  The desire of our will is what determines where we go in the other life.

Those who are natural and materialistic only fear the death of the body. Those who are spiritual fear spiritual death, and thus engage in periodic self examination and repentance.

That "death" in scripture refers to spiritual death is confirmed by Swedenborg in several passages:


"And we shall live, and not die. That this signifies spiritual life, is evident from the signification of living and not dying, as spiritual life, since nothing else is signified in the internal sense by living and not dying. For in the other world by life is signified in general heaven, and in particular eternal happiness; and by death is signified in general hell, and in particular eternal unhappiness there — as is plain from many passages in the Word. That heaven in general and eternal happiness in particular is called life, is because the wisdom of good and the intelligence of truth are there; and in the wisdom of good and the intelligence of truth is life from the Lord, from Whom is the all of life. But because in hell there is just the contrary — evil in place of good and falsity in place of truth, and thus spiritual life is extinct — therefore in hell relatively there is death; for spiritual death is evil and falsity, and in man it is to will evil, and thence to think falsity. Evil genii and spirits are unwilling to hear it said of them that they do not live, or that they are dead; for they say that they have life because they are able to will and to think. But they are told that since life is in good and truth, it cannot possibly be in evil and falsity; for these are contrary to good and truth." (Heavenly Arcana, n. 5407)

Nevertheless, natural punishments, such as plagues, are given by Divine Providence to correct human behaviour. What I am seeing with this plague, more so than other preceding plagues, is that it is forcing people to stay at home because it is initially hard to detect. It is a chance to become more introspective rather than being distracted by external things which really do not matter.

Preceding the coronavirus pandemic, there was a decline in traditional church membership, and I think one outcome of this coronavirus pandemic is people will seek a more inward spirituality rather than the external appearance of just going to church while ignoring one's spiritual and moral life.  It is how we live our lives which matters more than religious belief. A moral life becomes a spiritual life when one's intent becomes spiritual, which is to serve out of love towards God and others, rather than self gain.


SWEDENBORG'S ENCOUNTER WITH THE PLAGUE AND JESUS CHRIST

There is an interesting personal story in the life of Swedenborg which I find very instructive.   In 1710 when Swedenborg was a young man he had boarded a merchant ship bound for London, but when he arrived they were told they must remain on ship in quarantine for six weeks as a plague had broken out in Sweden. Some Swedes had boarded the ship and persuaded Swedenborg to join them to go to the city, however Swedenborg was caught, and the penalty for breaking quarantine at that time was hanging. However he luckily got away with only a severe warning. This was his closest encounter with death in his entire life.

Swedenborg had many visions, and was proven to be clairvoyant by so many witnesses that this is rarely doubted even by his most severe critics.  In the years 1744-45, he has a series of encounters during which time he shifted from recording dreams to having full waking visions of heaven.  In March of 1744, he had a dream in which he met Jesus Christ, and in that encounter Jesus makes a direct reference to a plague at that time:


"There came over me a shuddering, so strong from the head downwards and over the whole body with a noise of thunder, and this happened several times. . . . I then fell into a sleep and at about 12:00, 1:00 or 2:00 . . . there came over me a strong shuddering from head to foot, with a thundering noise as if many winds beat together; which shook me; it was indescribable and prostrated me on my face . . . at that very moment I was wide awake and saw that I was cast down . . . and I spoke as if I were awake; but found nonetheless that the words were put into my mouth. “And oh! Almighty Jesus Christ, that thou . . . deigned to come to so great a sinner. Make me worthy of thy grace.” I held together my hands, and prayed, and then came forth a hand, which squeezed my hands hard. Straightway . . . I continued my prayer and said, “Thou hast promised to take to grace all sinners; thou canst nothing else but keep thy word.” At that moment, I sat in his bosom, and saw him face to face; it was a face of holy mien . . . and he smiled so that I believe that his face had indeed been like this when he lived on earth . . . he asked if I had a clear bill of health. I answered, “Lord, thou knowest better than I.” “Well, do so,” said he. . . . Wakened, with shudderings." (Journal of Dreams, #51).

A "bill of health" was given at the time to people who had arrived on ship from another country to indicate that they did not carry the plague. Here, Jesus asked Swedenborg if he had a clear bill of health - that is, was he committed to living a spiritual life, and avoided things that led towards spiritual death.  Just think, if Swedenborg had died, he would not have contributed all the writings that we can freely read today, which explains the spiritual sense of the Word. Swedenborg was allowed to live so that in the future he could fulfill his mission to reveal the Second Coming, of which many Christians are ignorant due to the falsehoods which prevail in the churches. Perhaps Swedenborg was allowed to live at that moment because of God's future plan for him.

So, now that we are all confronted with death, what kind of commitment are we willing to make? How would we want to be remembered? Is there any unfinished business we should take care of?  It is a good time to re-evaluate our life.
Posted by Doug Webber at 1:40 PM