The Prophecy of the Little Horn or the Antichrist 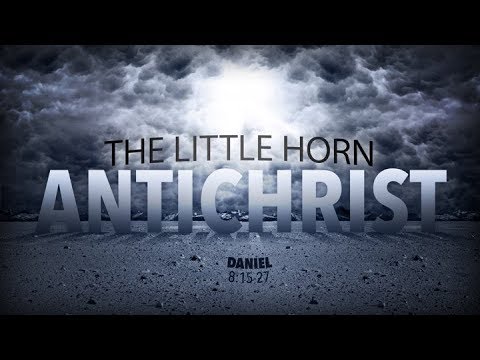 True Christianity is not just belief alone, but living one's life according to the commandments. This is made very clear throughout scripture. Here I will just quote two statements of Jesus:

Thus the Protestant teaching that teaches one is justified by faith alone is a perversion, based on a distortion of Paul's letters.  For by "works" Paul was not talking about works of doing what is good, but instead he was talking about the works of Jewish ritual law. As Jewish ritual laws were representations intended to represent the internal spiritual truths of Christianity, they were no longer necessary to be observed.


THE PROPHECY OF THE LITTLE HORN OF DANIEL

The doctrine of justification by faith alone is not the foundation of True Christianity; such a doctrine destroys and perverts the foundation of Christianity. It was unknown until the 16th century. This was foretold in end time prophecies in the books of Daniel and Revelation which speak of the perversion and fall of the Christian church. The substitute false church that is setup in its place is the Antichrist, for the teachings are a falsehood that are opposed to the essence of True Christianity.

There are two particular prophecies of Daniel which speaks of a "little horn" that arises at the end times, which are set forth in Daniel chapters 7 and 8. The popular interpretation of the "little horn" is one of a future Antichrist that arises in Europe, since in the literal interpretation of the prophecy it speaks of kingdoms that arise after the fall of the Roman Empire. But the spiritual interpretation is this: the little horn is the false teachings of Protestant doctrine that arise after the fall in power of not the Roman Empire, but that of the Roman Catholic Church. This is clearly set forth in the revelations given to Swedenborg for the doctrines of the New Church. Here is Swedenborg's explanation of Daniel chapter 7:


"Here in the internal sense the perverted state of the church is treated of. The things which were here seen by Daniel, as the beast, the teeth of iron, the horn in which were eyes, and the horns that spoke, and those which made war with the saints, and that which spoke against the Most High, signify the state of falsity and of heresies within the church. That horns signify falsity powerful and prevailing, may be evident only from this, that eyes are attributed to them, that is, understanding (n. 2701); and that they spoke, and even against the Most High. By the kingdoms and kings are not signified kingdoms and kings, but the teachings of falsity; as may be evident from their signification in the Word, as the teachings of truth, and in the opposite sense the teachings of falsity (see n. 1672, 2015, 2069, 2547)." (Heavenly Arcana, n. 2832.13)

The "little horn" is explained further in this passage from Apocalypse Explained - it is called a horn from power, and it is "little" because so few are able to see its falsehood:

For Daniel chapter 8, Swedenborg gets more specific: the little horn refers to those who separate faith from charity:


""out of one of them came forth a little horn" signifies justification by faith, for this is born of the principle of faith alone; it is said to be "little" because it does not appear as a falsity. That this horn "grew exceedingly towards the south, and towards the east, and towards beauty, and grew even to the host of the heavens, and cast down some of the host to the earth, and trampled upon them," signifies that it destroyed all the truths and goods of the church; "the south" meaning where truth is in the light, "the east" and "beauty" where good is in clearness through truth, "the host of the heavens" all truths and goods of heavens and the church; "to cast down the host to the earth, and to trample upon them," signifies to destroy utterly; that "even to the prince of the host it magnified itself," and that "the dwelling place of his sanctuary was cast down," signifies the denial of the Lord's Divine Human, and the consequent vastation of the church; "the prince of the host" is the Lord in respect to the Divine Human, because from that proceed all the truths and goods that constitute the church; "the dwelling place of the sanctuary" is the church where these are; this plainly means the truths destroyed by falsities, for it is said, "it cast down truth to the earth."" (Apocalypse Explained, n. 316.16)

This is repeated again in more detail in the work Doctrine of Faith (found in Doctrines of the New Jerusalem as well as The Divine Revelation of the New Jerusalem) in which it is explain that following the Protestant Reformation of the 16th century, a new revelation of Christianity would be given, described as the "morning" after a period where the sanctuary (the church) is trampled down:


"The ram which had the two high horns, of which the higher came up last, signifies those who are in faith coming from charity. His pushing with the horn westward, and northward, and southward, signifies the dispersion of evil and falsity. That he made himself great, signifies increase. The he-goat which came from the west, on the face of the whole earth, signifies those who are in faith separate from charity, and the invasion of the church by them; the west denotes the evil of the natural man. Which had a horn between his eyes, signifies his own intelligence: his running at the ram in the fury of his power, signifies that he fought vehemently against charity and its faith: his breaking his two horns, throwing him to the ground, and stamping upon him, signifies that he wholly dispersed both charity and faith; for he who disperses the one disperses the other also, since they that the great horn of the he-goat was broken, signifies the non-appearance of his own intelligence: the coming-up of four horns in its place, signifies applications of the sense of the letter of the Word in confirmation: the coming forth of a little horn from one of them, signifies reasoning that no one can fulfil the Law, and do good of himself: the growth of that horn toward the south, toward the east, and toward what was pleasant, signifies its rising-up against all things of the church: and even to the host of the heavens, and it cast down unto the earth [some] from the host and from the stars, and it trampled them, signifies that so were destroyed all the cognitions of good and of truth, which belonged to charity and to faith. That he raised himself up even to the prince of the host, and from him the daily sacrifice was taken away, and the dwelling-place of his sanctuary was cast down, signifies that thus he laid desolate all things belonging to the worship of the Lord and to His church: that he cast the truth to the ground, signifies that he falsified the truths of the Word. By the evening, the morning, when the holy place will be justified, is signified the end of that church, and the beginning of a new one." (Doctrine of Faith, n. 67)

For a further assessment of the prophecies in Revelation related to the book of Daniel, see The Prophecy of the Dragon, the Beast, and the False Prophet and The Spiritual Meaning of the Woman of the Apocalypse.


WHAT OF OTHER TRADITIONAL INTERPRETATIONS?

The traditional interpretation of the prophecies of Daniel is that they successively describe different kingdoms of the Middle East that ruled over Judea: Babylon, Medo-Persia, Greece, the Roman Empire, and then a future kingdom of 10 kings. Prophecy has a dual nature, sometimes a short term literal fulfillment comes to pass to signify a larger spiritual event. For an example of this, see The Prophecy of Daniel 11-12 Explained. Historical events are thus used to symbolically represent the internal spiritual states of not only the Jewish church, but of the Christian church that followed it:


"The subject here is the state of the church in general, not only the state of the Jewish Church, but also that of the following, which is the Christian Church; for the Word of the Lord is universal. The he-goat of the goats, in respect to the Jewish Church, signifies those who made nothing of internal truths, but accepted external truths so far as they favored their loves, which were that they might be the greatest and the wealthiest. For this reason they recognized the Christ, or Messiah, Whom they were expecting, simply as a king, who would exalt them above all the nations and peoples in the whole world, and would make these subject to them as vilest slaves: this was the source of their love for Him. They did not at all know what love toward the neighbor was, except that it was conjunction through participation in such honor, and by gain.
"But the he-goat of the goats in respect to the Christian Church signifies those who are in external truths from enjoyments, that is, who are in faith separate; for these also care nothing for internal truths; and if they teach them, it is only that they may thereby win reputation, be exalted to honors, and acquire gain. These are the enjoyments which are in their hearts while truths are in their mouth. Moreover by sinister interpretations they force the truths which belong to genuine faith, to favor their loves. It is plain from this what is signified in the internal sense by the above words in Daniel — namely, that by a he-goat of the goats are signified those who are in faith separate." (Heavenly Arcana, n. 4769.2-3)

In the work Heavenly Arcana, the symbolism of scripture is explained in more detail, proving that the horn that arises out of the he-goat are those who create falsehoods out of the external literal sense of the Word. However instead of trusting what is taught in many churches, read the scriptures for yourselves. For the Antichrist does not come from outside the Christian Church, it comes from within the church, and is worshiped as what is holy - this is the "abomination of desolation" which stands "within the holy place" (Matt. 24:15). That the end times are here, one can easily see in the decline of Christianity in society, as well as its loss in influence over the ideas that are accepted as true. This is because of the inherent falsehoods within some teachings that have destroyed the truths from within. But the good news here is there is a new revelation given, which is the doctrines of the New Church, and this revelation is the fulfillment of the Second Coming as it reveals the internal spiritual sense of the Word.

The Spiritual Meaning of Daniel's Prophecy of the Statue of Nebuchadnezzar

The Spiritual Meaning of the Abomination of Desolation

The Prophecy of the Abomination of Desolation (part 1)

The Prophecy of the Abomination of Desolation (part 2)

The Prophecy of the Last Judgment

The Prophecy of Babylon and the Writing on the Wall

The New Church Prophecy of the 2300 Days, or the Cleansing of the Sanctuary

Is the Second Coming a Physical Event or Spiritual Event?
Posted by Doug Webber at 9:09 PM