Is the Doxology of the Lord's Prayer Original? 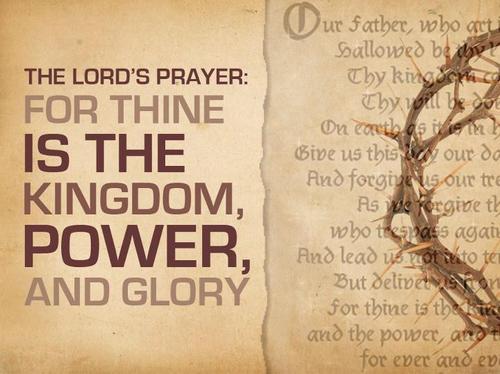 
And he said to them, “When you pray, say: “Father, hallowed be your name. Your kingdom come.  Give us each day our daily bread, and forgive us our sins, for we ourselves forgive everyone who is indebted to us. And lead us not into temptation.” (Luke 11:2-4)

And the longer version from Matthew:


Pray then like this: “Our Father in heaven, hallowed be your name.  Your kingdom come, your will be done, on earth as it is in heaven.  Give us this day our daily bread, and forgive us our debts, as we also have forgiven our debtors. And lead us not into temptation, but deliver us from evil. For yours is the kingdom, and the power, and the glory forever. (Matt. 6:9-13)

The last phrase is excluded since in modern Biblical criticism, greater weight is given to the early Alexandrian texts over the Byzantine Majority Text. The majority of texts include it, but these earlier manuscripts do not. They ignore the fact that the Alexandrian text tradition has errors of its own. The modern Bibles that exclude the text are as follows:


Others enclose it square brackets. This was quite surprising when I saw the removal. So is it original or not? The scholars who exclude it have to ignore some evidence in its favor. For example there is an early Christian document from the first or second century A.D. known as the Didache which is based on the gospel of Matthew, and it includes it:


Neither pray as the hypocrites; but as the Lord commanded in His Gospel, thus pray: Our Father who art in heaven, hallowed be Your name. Your kingdom come. Your will be done, as in heaven, so on earth. Give us today our daily bread, and forgive us our debt as we also forgive our debtors. And bring us not into temptation, but deliver us from evil; for Yours is the power and the glory forever (Didache, ch. 8).

Beyond the Alexandrian and Byzantine text traditions, there are other ancient translations which include it: the Syriac translations, the Diatessaron, and the Sahidic Coptic translation (see The Lord's Prayer.)

However there is one additional piece of evidence that all scholars have ignored, or have failed to notice: a form of the Lord's prayer is hidden within the book of Revelation. This can be seen with a detailed comparison between Matt. 6:9-13 and Rev. 1:4-6. See the table below:

The similarity is remarkable: a different form of the doxology is found in the book of Revelation. It is different enough where it is unlikely that the gospel of Matthew borrowed from Revelation, and the dates of authorship are prohibitive: most scholars agree that Revelation was written later than the four gospels. It is shameful that modern scholars ignore the fact that there are numerous corruptions in the Alexandrian texts which forms a small minority of the manuscript evidence: see The Unreliablitity of the Alexandrian Manuscripts - Sinaiticus and Vaticanus are among the worst manuscripts known.

In the Orthodox Church, the doxology is integral to their liturgy and is still preserved intact. The congregation typically chants the Lord's prayer, but the doxology is reserved for the priest. The Didache is evidence of an early form of communal worship, and the gospel of Matthew is directed for the Jews who formed the first Christian communities.

Some comparisons between Matthew and the Apocalypse deserve more comment:

The opening of the Lord's prayer: Our Father who art in heaven, Hallowed be thy name - is in fact a hidden address to the Trinity in the person of Jesus Christ.  The Father is the Divine itself, His name is Jesus Christ, and "Hallowed" which means "Holy" is a hidden reference to the Holy Spirit which is the spirit of God that proceeds from the Divine through the body of Jesus Christ. This is why in the Apocalypse mention is made of the "seven Spirits" - where seven signifies all or what is holy. The Catholic falsely add an attribution to the Trinity of three persons at the beginning and end of the prayer in their liturgy, not realizing it is already there in the Lord's Prayer itself.

In the New Church it is revealed that the Lord's Prayer is fulfilled when we pray directly to Jesus Christ. But the false doctrine of a trinity of three persons leads to confusion: Christians keep asking: who do I pray to?  The former website I linked to exposes this problem with a question: When we pray, we do we address? Because traditional Christian theology is a false form of tritheism, and in the Lord's Prayer they bypass Jesus in their thoughts. The New Church theology is monotheistic: prayers are directed to One God only who is Jesus Christ. One can see in the comparison: the Father's name is Jesus Christ. In the OT He is known as Jehovah, and in the NT Jesus is called "Lord" which is also a Jewish title for Jehovah. The Lord, in his human form, does pray to the Father, but this is done when He was in a state of humiliation, where the Divine had been lowered into human form that could be tempted from the body that had been inherited from Mary.

Another portion deserves more comment: the "bread" of the Lord's prayer is replaced by "love" in the Apocalypse. But it is to be known that the bread is the communal bread of the Eucharist which is a symbolic representation of Divine love. It is not a literal prayer for physical food, as literalists may presume. For further information on this symbolism, see The Symbolism of Communion and Salvation by Blood.


THE SPIRITUAL MEANING OF THE DOXOLOGY