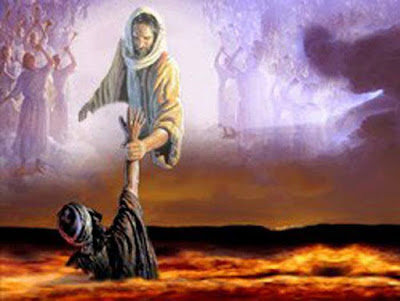 As ISIS has tortured and killed thousands of people, and destroyed ancient Christian communities in Syria and Iraq, there are reports of Muslims having visions and dreams of Jesus.  This seems to be more common in areas of trouble where people do not have access to a Bible, which I discussed in the earlier blog post in Muslim Encounters and Visions of Jesus.  I wanted to share another very personal encounter with Jesus, to show how Jesus continues to act in very direct ways to save individual people.  It reminds us how Jesus desires to know us in a personal way - God loved us so much He became incarnate in human form to save us, and also so that we can know him better.  In the west we often see religion held in derision for the sake of atheism, money and selfish pride.  But in the Middle East, although people are ignorant of the truth we can see how Jesus reaches out to them to touch their heart.

Here is the story of Shirzad, who served in the Iraqi army and he described himself as a very bad man.  He subsequently began work for a cell phone company, and while working in Iraq he was kidnapped by ISIS terrorists who tortured him for 3 days and were going to demand ransom money, if they decided not to kill him.  They would hit him with the butt of an AK-47 - they broke his knee, broke his nose, and damaged his kidney, and had to spend 6 months in the hospital for the injuries they caused him.  They had surrounded him in a room, and one was hitting him the the rifle, and at one moment Shirzad sees a man in white walk into the room.  None of the ISIS fighters took notice.  The man looks at Shirzad and speaks to him in Arabic:

Isa is the Arabic name for Jesus.  Shirzad then tells him, "Are you serious? Do you see these people who kidnapped me?"

Jesus then sits in the middle of the room, and still the ISIS fighters can't see him.  Jesus then tells Shirzad:

At that very moment a fight breaks out among the ISIS fighters, and one of them takes his rifle and shoots one of his friends.  In the commotion, Shirzad simply gets up, opens the door and walks out to the highway.  A taxi drives by which he then takes to go home.  He is greeted by his wife who asks him where has he been.  He says that he had been kidnapped in tortured by ISIS for the past 3 days.  His wife then tells him when he was gone, Jesus appeared to her in a dream.  In the dream Jesus had told her: "I am Jesus, and I have saved your husband.  He is coming home soon."

Shirzad then calls his cell phone company and tells them he had been kidnapped by ISIS for the last three days.  They asked him how did he escape.  Shirzad then says, "Jesus saved me."  At which of course they all laughed.

Shirzad is now a changed man, saved not only from physical death but more importantly from spiritual death.  Here is the video of his testimony:

Obviously, when someone claims to have an encounter like this it is viewed with skepticism.  And I have forgotten that many readers are not familiar with visionary experiences and do not believe they exist, or seek a natural explanation.  So I will ask the question: is he lying?  He has no reason to lie.  Living in Iraq, if you announce you are Christian you immediately become the target of ISIS.

The fact of the matter is, the Bible which we have would not exist were it not for supernatural visionary and auditory experiences from a higher realm to ours.  In scripture, Paul stopped persecuting the early Christians when he had a visionary encounter with Jesus.  This has happened with some fighters of ISIS as well, who have been brainwashed by religious clerics.  Also in the book of Acts, an angel released the apostles John and Peter from prison.  It happened then, it can still happen now.  These kinds of interventions tend to only occur in life and death scenarios.  They follow a particular pattern, which makes frauds easy to spot.

The other aspect I considered for this testimony is that from Emanuel Swedenborg, we know that every miracle that Jesus performed in the gospels has a spiritual significance, or a more universal meaning.  Consider this: Shirzad was kidnapped and help captive for three days.  This of course is similar to the 3 days that Jesus spent in the tomb before the resurrection.  During this time, Jesus preached to the souls held in captivity in the spiritual world before releasing them, as declared in the epistle of Peter.  Releasing these souls from captivity is the subject of many of the visions of Swedenborg, as well as Anne Catherine Emmerich.  In Heavenly Arcana, Swedenborg also discusses how the symbolism of the story of Exodus pertains to this spiritual captivity.  For further information on this see Jesus the Shaman - Descent into the Underworld.  Again Shirzad is not the only one, this is happening across the Middle East - see Muslim Encounters and Visions of Jesus.
Posted by Doug Webber at 11:13 PM