The Discovery of Planet X and Ancient Extraterrestrial Contact

After years of speculation, scientists have finally uncovered solid evidence for the existence of "Planet X" or the ninth planet of our solar system.  Planet X has been the subject of constant speculation and pseudo-science, but the factual evidence behind this discovery is solid.  One of the discoverers is Mike Brown, whose discoveries of Eris and Sedna helped lead to Pluto being demoted to a "dwarf planet."  This is big news - Mike Brown had this to say about this discovery:


“Killing Pluto was fun. Finding Sedna was scientifically interesting,” he says. “But this one, this is head and shoulders above everything else.”

Here is a diagram of the proposed "Planet X" or "ninth planet": 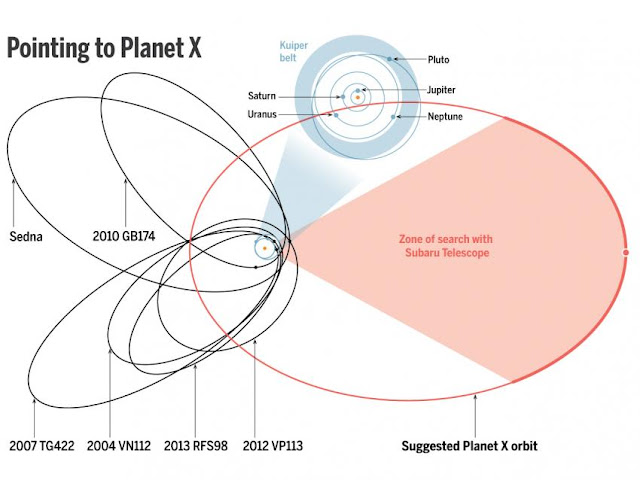 Planet X has not yet been directly observed by telescopes.  So how do they know it exists?  From the article Astronomers say a Neptune-sized planet lurks beyond Pluto:


Batygin and Brown inferred its presence from the peculiar clustering of six previously known objects that orbit beyond Neptune. They say there’s only a 0.007% chance, or about one in 15,000, that the clustering could be a coincidence. Instead, they say, a planet with the mass of 10 Earths has shepherded the six objects into their strange elliptical orbits, tilted out of the plane of the solar system.

The orbit of the inferred planet is similarly tilted, as well as stretched to distances that will explode previous conceptions of the solar system. Its closest approach to the sun is seven times farther than Neptune, or 200 astronomical units (AUs). (An AU is the distance between Earth and the sun, about 150 million kilometers.) And Planet X could roam as far as 600 to 1200 AU, well beyond the Kuiper belt, the region of small icy worlds that begins at Neptune’s edge about 30 AU.

There is other anomalies as well, indicating that there is a ninth planet in our solar system.  The following chart summarizes the history of the evidence: 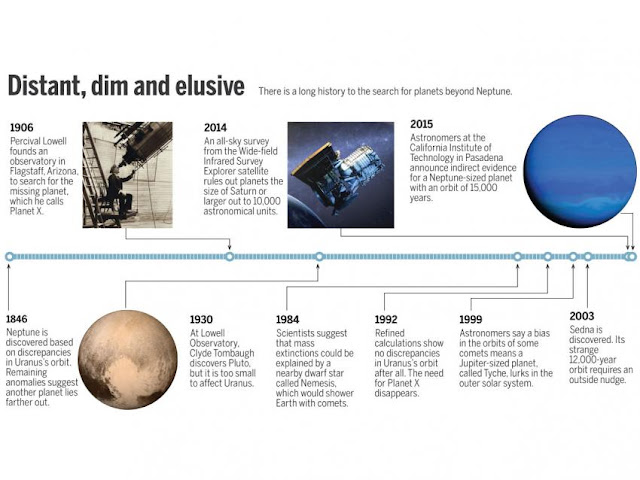 So, that is the science behind the discovery of Planet X.  The certainty of the discovery has a statistical significance of 3.8 sigma, above the typical threshold of 3 sigma to be taken seriously.


THE SYMBOLIC ASTRONOMY OF THE CHRONOLOGY OF GENESIS

I regard the possible discovery of Planet X significant for another reason.  Back in 2009, I did some research into the symbolic chronology of the 10 patriarchs before the flood, who are said to have lived to incredible ages.  What I discovered is that the ages and chronology of these patriarchs encode within them the orbital periods of the eight planets of the solar system - including Uranus and Neptune.  I summarized the research in the blog post, The Ancient Astronomy of the Bible.  The pattern is at first hard to find: the chronology does not always directly discuss orbital periods, but instead uses periodic transits that occur between the different bodies of our solar system.  One must also have an accurate Biblical chronology in order to recognize the dates of these periodic transits which are marked by events in the Biblical record.  Each patriarch that reigned before the flood of Noah is symbolic of one of the planets in our solar system, as follows:


The most obvious pattern most will recognize is that the patriarch Enoch lives for 365 years before being taken up into heaven, which is an obvious reference to the 365 days it takes for the earth to rotate around the Sun.  Enoch represents the earth, and as in ancient times many were not aware the earth was a planet in heaven, it was said that Enoch was not found, for he ascended into heaven (Gen. 5:24, Heb. 11:5).  To many of the ancients, earth itself is the invisible body they can't see in the heavens because we observe everything from planet earth itself.

Is it even possible that the ancients knew of Neptune or Uranus, which are not observable without a telescope?  Consider this statement from the book of Jasher concerning Enosh, who represents Uranus which has an orbital period of 84 years:


And it was in the eighty-fourth year of the life of Noah, that Enosh the son of Seth died, he was nine hundred and five years old at his death. (Jasher 5:1)

I won't go over all the evidence here, I recommend the reader to peruse the article The Ancient Astronomy of the Bible for all the astronomical details.  However anyone reading the article from 2009 can see I hit a problem: there is no planet of the solar system for Adam.  Here is what I wrote:


The father of Seth is Adam, who lives for 930 years. At this point what planet Adam may represent is unclear. Beyond Neptune is Pluto, which was once regarded as a planet – but is now regarded as a dwarf planet. Recently several dwarf planets have been discovered beyond Neptune. Some are too far away to presently confirm whether or not they should be classified as a dwarf planet. What is interesting is that the dwarf planet Makemake has an orbital period of 310 years. Adam lived 930 years, and 930 = 3 x 310. Although it is tempting to associate the orbital period of Makemake with Adam, this does not explain why the death of Adam is associated with a transit of Venus across the Sun in 2971 B.C. More likely, Adam corresponds to the Sun.

However further in the article I decided the Sun does not make sense - Adam must represent a planetary body beyond Neptune.  So I settled for the insignificant dwarf planet Makemake, but even that does not completely fit as it is now known to have an orbital period of 309 years, not 310.


THE GARDEN OF EDEN AND THE RACE OF ADAM

So how is this all related to ancient extraterrestrial contact?  One would expect an ancient myth to start from the Sun and number outwards, but this pattern numbers from outside the solar system going inwards - suggesting that in ancient times our civilization was influenced by an extraterrestrial contact from beyond our solar system.  This would be the only explanation for knowledge of Uranus and Neptune, as well as information concerning their orbital periods.  Different versions of this story of Genesis is widespread: in Sumer there are ancient king lists which record 10 antediluvian kings before the flood.  In Egypt there is the Ennead of nine gods, beginning with the god Atum (who is similar to Adam).  In Greece, there is the story of Atlantis and the 10 kings that reigned before it sank into the sea.  Among all the ancient myths, there are traditions that all the sciences and teachings of civilization were given to man from the "gods" who descended from the stars.  Thus many ancient civilizations degenerated into worship of the sun, moon and stars.

This finding would confirm some of the statements of Emanuel Swedenborg, who was told in visions that the first 11 chapters of Genesis is a symbolic representative history.  The embedded astronomical information is just one layer of the story.  Adam was not the first man on earth, but represents the first spiritual race on this planet, which had direct contact with heaven through internal visions and spiritual perception.  The Garden of Eden is symbolic of this state of direct union between heaven and man, from which the race of Adam fell when they began to trust their own knowledge and things that they could observe with the senses.  What better way to represent the fall of Adam from heaven, than to use the planets of the solar system in a progression falling inward towards the center of the solar system?

If and when a ninth planet is finally confirmed, once the orbital period is discovered this will be the final confirmation of this theory concerning the chronology of Genesis and possibly extraterrestrial contact in ancient times.  If discovered, and if it confirms this theory, then I would propose we name the planet "Adam", or perhaps Atum after the first Egyptian god of the Ennead. Wikipedia says this of Atum:


Atum was a self-created deity, the first being to emerge from the darkness and endless watery abyss that existed before creation.

Here is a video discussing the ninth planet, beginning with the statement that the ancients did not know of any planets beyond Saturn until the invention of the telescope: