The Tritheism of Christianity 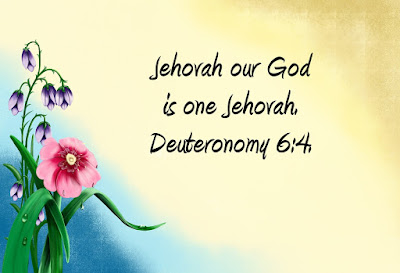 The main revelation shown to Swedenborg in his visions was that God is one in person in Jesus Christ, in whom there is a trinity of soul, body, and spirit. When God became incarnate, this became the Holy Trinity.  The true Trinity is an emanation of the Divine: the Divine itself, the Divine Human, and the proceeding Divine Spirit.

This statement is opposed by traditional Christians, who follow a tritheism of three persons in the Godhood.  They will typically (and incorrectly) classify it as "Modalism" - which is something completely different (God appearing in different modes at different times).  Nevertheless, I try to open their minds up by sometimes having online conversations with them.

The problem here is they have been taught this from childhood, and it is a foundational belief, although it was decided in a church council.  For the Nicene Creed not only declared that there were three persons, but also invented the doctrine of a "Son born from eternity".  This is a fiction: there was no Son born from eternity.  There was the Son of God born in time to the virgin Mary.  Before Jesus was conceived, there was no Father-Son relationship. Thus there is no mention of the Trinity or the Father-Son relationship until Jesus was conceived. Before that, you had God and His Word.

One point that is an issue: it is true that Jesus does pray to the Father.  But what is not understood is that when Jehovah became incarnate as a human, He became human like us in every way.  Moreover, He inherited a human body from Mary which He gradually had to shed off, as He could be tempted to do evil through that human body. In other words, He was born in a state of humility, in a state where He could be tempted. It is in this limited finite human state that He prays to the Father as a separate person. This is because He had to grow like any other person, until He united His human with the Divine, transforming it into a Divine Human.  Thus people who read the Gospels often confuse states of being with two different beings. In His state of humility, where He prays to the Father, He was in a state of "exinanation", where He is lower than the Divine.  In His state of Divinity, He was in a state of "glorification", at one with the Divine, where He declares Himself one with the Father.  Those who believe in a trinity of three beings do not understand this, and misinterpret the Gospels in order to support the Nicene Creed.

The apostle Paul describes how Jesus "lowered" Himself, taking on the "form of a servant" (a state of humility where He prays to the Father) yet made Himself "equal with God" (a state of oneness with the Divine):


Let this mind be in you, which was also in Christ Jesus: Who, being in the form of God, thought it not robbery to be equal with God:But made himself of no reputation, and took upon him the form of a servant, and was made in the likeness of men:And being found in fashion as a man, he humbled himself, and became obedient unto death, even the death of the cross.Wherefore God also hath highly exalted him, and given him a name which is above every name:That at the name of Jesus every knee should bow, of things in heaven, and things in earth, and things under the earth;And that every tongue should confess that Jesus Christ is Lord, to the glory of God the Father. (Phil. 2:5-11)

And when Jesus does achieve a complete state of union with the Divine, He declares that all power has been given to Him on heaven on earth. So it is clear who He truly is: He is the God of this universe.

So, when discussing this with those who believe in a trinity of three persons, who cannot explain how God is "one", they do not understand the progression Jesus had to make growing spiritually as a human, and they do not know of these two states of being.  The typical defense they make, is oh, look at the baptism, you have the voice of the Father, and the Holy Spirit descending like a dove upon Jesus.  They do not understand this was a vision: for no one would claim that the Holy Spirit is actually the bird of a dove! It means at this point in time Jesus had resisted sin and temptation to the point where the Holy Spirit began to flow through His body where He could then start performing miracles. For He was conceived by the Holy Spirit, the Holy Spirit was with Him at birth.

So that's the first argument they make. The second common one is: after He ascended to heaven, He sat at the right hand of God. Again, they are taking a figure of speech and taking it literally.  For "right hand" indicates the highest place of honor.  What is said here?  His Human was made Divine, a Divine Human, in which the Father resides. No one can see the Father, but we know Him through Jesus. It is the Human form which was made Divine upon the resurrection, thus He is at the "right hand" of the Father.

But in the conversation, the distortions of scripture begin to get rather ridiculous.  Its almost like having a conversation with someone who is taking their nails and scratching a chalkboard.  Some go so far as to declare that God has "three wills".  It is tritheism pure and simple, though they say with the mouth one God, in fact they worship three. Modern Christianity, for the most part, has been adulterated from its original form, where nothing of the original church remains.

But, I found one argument interesting.  What about this one, where Jesus prays to the Father to send the Holy Spirit?  So that would mean the Father is a separate person, right?  Here is the verse quoted to me:


And I will pray the Father, and He will give you another Helper, that He may abide with you forever --- the Spirit of truth, whom the world cannot receive, because it neither sees Him nor knows Him; but you know Him, for He dwells with you and will be in you. I will not leave you orphans; I will come to you. (John 14:16-18)

Actually, they quoted the first verse, where the argument is the Father is another person who sends the Holy Spirit.  But if the Holy Spirit is a separate person, then why does Jesus say "I will come to you"?  I missed that point, but it shows we are talking about different manifestations of one person: the spirit emanates from the soul or being (the Father) through the body (the Son).  Moreover, in the exact same discourse, Jesus says this:


Nevertheless I tell you the truth. It is to your advantage that I go away; for if I do not go away, the Helper will not come to you; but if I depart, I will send Him to you. (John 16:7)

Why is this important?  Because those who follow a trinity of three persons pray to one and ignore the other. The person who is ignored is Jesus Christ, as they pray to a supposed separate being, the Father.  But what they do not know, is that in the Lord's prayer, we say, "Our Father, who art in heaven, hallowed be Thy name".  What is the Father's name?  Jesus Christ.  So when you pray, pray to Jesus. You might find interesting things will begin to happen in your spiritual life, for then Jesus will hear those who address Him directly. When I realized this, I realize what I had done: for anyone who worships a trinity of three persons is not acknowledging Jesus in their prayers, they do not acknowledge who He truly is.  Its as if we are crucifying Him, with two other persons on either side standing as thieves.
Posted by Doug Webber at 10:53 PM