Why Priestly Celibacy is Unnecessary 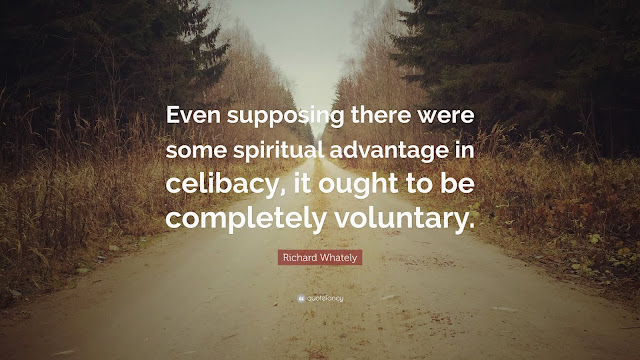 The Catholic Church has a huge problem on its hands - and this concerns the sexual abuse of others and the homosexuality by priests, who have taken a vow of celibacy.  Homosexuality among priests in the Catholic Church is a big problem, and it is not going away. In fact, this is nothing new.  It has been going on for centuries. What has changed is that this hidden behavior was brought to public view in sexual abuse lawsuits in the United States.


SHOULD PRIESTS TAKE A VOW OF CELIBACY?

So what to do about it? Just ask for the resignation of priests?  Yes, you can do that, but you are again sidestepping the issue. The issue is that humans are not designed to be celibate. The celibacy requirement for the Catholic Church came much later in its history.  Originally it was not a requirement, it was optional.  I am sure there are priests who had good intentions, but have to internally struggle about this issue and cannot speak about it openly. I wonder just who do they talk to when dealing with this. To solve the problem, the Catholic Church needs to make the vow of celibacy optional, and not a requirement for the priesthood. It would solve two problems for them:


1. There is a shortage of priests in the Catholic Church. In this way more people could step up to help lead congregations.

2. It would remove a road block for closer integration with the Orthodox Church. Celibacy is not a requirement for Orthodox priests.

The solution is obvious, but the Catholic Church is an organization that tends to not break with tradition. To convince them, they would need a theological basis for making the vow of celibacy optional for the priesthood. Hopefully they will become practical about this. It is better to permit marriage then to let someone deviate into sexual abuse or homosexuality. If the Catholic Church is committed to protecting children and the unborn, it should do this.


WAS CELIBACY EVERY COMMANDED IN SCRIPTURE?

Well lets just settle this once and for all. Was celibacy ever commanded for the priesthood? The answer is no. The Levitical priests among the Jews were allowed to marry. So what about the early leaders of the Church? NO, NO, and NO:

Let deacons be the husbands of one wife, ruling their children and their own houses well. (1 Tim. 3:12)

For this reason I left you in Crete, that you should set in order the things that are lacking, and appoint elders in every city as I commanded you ---if a man is blameless, the husband of one wife, having faithful children not accused of dissipation or insubordination.For a bishop must be blameless, as a steward of God, not self-willed, not quick-tempered, not given to wine, not violent, not greedy for money,but hospitable, a lover of what is good, sober-minded, just, holy, self-controlled,holding fast the faithful word as he has been taught, that he may be able, by sound doctrine, both to exhort and convict those who contradict. (Titus 1:5-9)

Not only is celibacy not a requirement, in the first century the opposite was true: the bishop, elder or priest was required to be married! What about the apostles? NO, look at what Paul says:


Do we have no right to take along a believing wife, as do also the other apostles, the brothers of the Lord, and Cephas? (1 Cor. 9:5)

All the apostles had wives.  And so did the half-brothers of the Lord. That would include James the Great, who became the first leader of the Church in Jerusalem.  Who is Cephas?  Cephas is the apostle Peter:


One of the two who heard John speak, and followed Him, was Andrew, Simon Peter's brother.He first found his own brother Simon, and said to him, "We have found the Messiah" (which is translated, the Christ).And he brought him to Jesus. Now when Jesus looked at him, He said, "You are Simon the son of Jonah. You shall be called Cephas" (which is translated, A Stone). (John 1:40-42)


WHAT OF THOSE WHO HAVE TAKEN A VOW OF CELIBACY?

Depending on the reasons why one took a vow of celibacy in the first place, deciding to keep it is a personal decision. It is better to marry, but for some it may be better to remain celibate. What did Swedenborg say on this issue?  First, celibacy contains within it an inherent danger related to sexuality, and the perversion of the holy things of religion:


...because an inclination to the sex is yet inherent, from creation and hence by birth; and when this is restrained and repressed it cannot be but that the inclination will break forth in heat, and with some in a ferment, which as it rises up from the body into the spirit infests, and with some befouls it; and it may be that the spirit thence befouled will befoul also the things of religion, and drag them down from their seat in the internals, where they are in holiness, into externals where they become but a thing of the mouth and of gesticulation; for which reason it is provided of the Lord that this celibacy is only with those who are in external worship,—in which they are because they do not approach the Lord, and do not read the Word. With them the eternal life is not so much imperilled by injunctions of celibacy, with at the same time a solemn promise of chastity, as it would be with those who are in internal worship. (Angelic Wisdom concerning Marriage Love, n. 155).

For others, however, celibacy allows one to be more devoted to their office.  And in the afterlife, these people have the option to choose to no longer be celibate (according to Swedenborg, there are married pairs in heaven, who can appear as one angel depending on how close the union is):


Among those who adopt that state of life for the sake of withdrawal of the mind from the world that they may have leisure for Divine worship, they only are chaste with whom either there was a love of true marriage life before that state, or with whom it comes and remains after it; because it is of this life that chastity is predicated. And on this account, after death all who have lived in monasteries are at length absolved from their vows and set at liberty, that they may be brought to choose either a married life or a life outside of marriage, according to their interior vows and the desires of their love. If then they enter into marriage life, those who also have loved the spiritual things of worship are given in marriage in heaven. But those who choose a life outside of marriage are sent to their like who dwell on the borders of heaven. I have asked the angels whether they who have been zealous in piety and have given themselves up to Divine worship, and so have withdrawn themselves from the illusions of the world and from the lusts of the flesh, and have with this purpose taken vows of perpetual virginity, are received in heaven, and there become first among the blessed according to their faith? The angels replied that they are indeed received, but when they feel the sphere of marriage love there they become sad and troubled; and some, of their own free will, some by asking leave, and some by command go or are sent away; and that when they are outside of that heaven a way is opened for them to their companions who were in a similar state of life in the world; and then from being troubled they become merry and rejoice together. (Angelic Wisdom concerning Marriage Love, n. 155).

If this choice to be absolved from the vow occurs in the afterlife, it should also be permissable to have the vow of celibacy be absolved in this life as well. Hopefully the time has come for change in the Catholic Church.
Posted by Doug Webber at 12:23 AM

Email ThisBlogThis!Share to TwitterShare to FacebookShare to Pinterest
Labels: Celibacy