The Spiritual Origin of Free Will 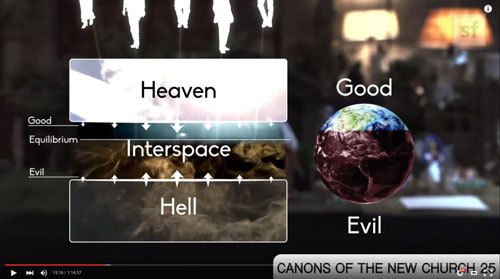 What is free will, and what is its origin?  This is something that distinguishes humans from animals: whereas animals are born with instincts, thus animals of one species all behave the same way, or have an innate knowledge, humans are not born with that but must be taught.  We, as humans, can choose our behaviour or inclination. We can choose between good and evil, and this is free will.  Aristotle thought that reason or rationality is what distinguished humans from animals.  For Swedenborg, our reason and rationality is spiritual in origin.  Not only that, but free will comes about from existing in a state of equilibrium between heaven and hell.  We are constantly faced with a choice of following the good, or following evil.  Here is Swedenborg's understanding of the spiritual origin of free will, which he was able to discover from his spiritual visions:


"That what free will is may be known, and its quality, it is necessary to know whence it is. From a knowledge of its origin, especially, it becomes well known not only that it is, but also of what quality it is. Its origin is from the spiritual world, where man's mind is kept by the Lord. The mind of man is his spirit which lives after death; and man's spirit is constantly in company with its like in the spiritual world, and by means of the material body with which it is compassed it is with men in the natural world. The reason why man does not know that he is in the midst of spirits as to his mind, is that the spirits with whom he is in company in the spiritual world think and speak spiritually; but man's spirit, so long as he is in the material body, thinks and speaks naturally; and spiritual thought and speech can be neither understood nor perceived by a natural man, nor the reverse; and it is from this that they cannot be seen. But when a man's spirit is in society with spirits in their world, he is then also in spiritual thought and speech with them, because his mind is inwardly spiritual but outwardly natural, and he therefore communicates with spirits by his interiors, but with men by his exteriors. By that communication man perceives, and thinks analytically; without it he would not think more or otherwise than a beast, as he would also die instantly if all relations with spirits were cut off. But to make comprehensible how man can be kept in the middle between heaven and hell, and thereby in spiritual equilibrium, from which he has free will, a few words shall be said. The spiritual world consists of heaven and hell; heaven is over head, and hell is there beneath the feet, not, however, in the centre of the planet inhabited by men, but under the earths of the spiritual world, which also are of spiritual origin, and therefore not in extension but in its appearance. Between heaven and hell there is a great interval, which to those who are there seems like a complete world. Into this interspace, from hell exhales evil in all abundance; and from heaven, on the other hand, good flows in thither, also in all abundance. It was this space of which Abraham said to the rich man in hell, Between us and you there is a great gulf fixed, so that they who would pass from hence to you cannot, neither can they pass to us that would come from thence (Luke xvi. 26). In the midst of this space every man is as to his spirit, and solely for this, that he may be in free will." (True Christian Religion, n. 475).

If one looks at definitions of free will in western and eastern philosophy, it is a confusing mess.  Part of the confusion is that a spiritual world is for the most part not acknowledged when philosophers attempt to define human psychology, or do not understand the relationship between the spiritual and the natural.  Without understanding the spiritual world, one is always describing the effects rather than the causes.  A denial of free will - such as a belief in predestination or determinism - destroys the essence of religion and social and spiritual responsibility.

With an understanding of free will, one can develop the basis of a simple philosophy when it comes to religion.  Although we have free will, every choice we make puts us in alignment with heaven or hell.  That is why it is important to self-examine ourselves, to see where we fall short.  This art of self-examination is called "repentance" - to repent means to turn.  When we acknowledge our faults, and turn away from them, the Lord then releases us from the bondage of hell.  This means, do not assume you are always right, do not make the false assumption that you are better than others.  Look for ways to improve yourself, and look for ways to be useful.  The Christianity of the New Church as revealed to Swedenborg is thus utilitarian and pragmatic, and it comes from a spiritual understanding of the origin of free will.
Posted by Doug Webber at 9:24 PM

Email ThisBlogThis!Share to TwitterShare to FacebookShare to Pinterest
Labels: Free Will, Spiritual Equilibrium