A Biblical Prophecy predicting the coming of Jesus 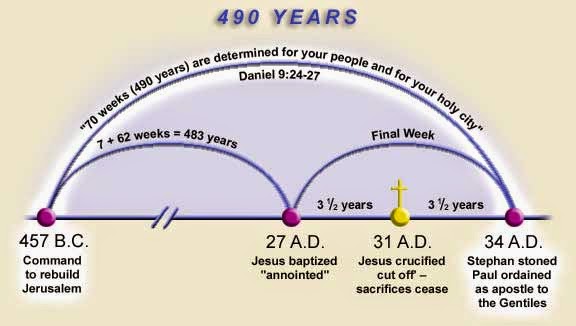 I still encounter people who deny that prophecy exists. And for that reason, I wrote a book on the prophecies of Nostradamus, to demonstrate that prophetic knowledge of the future does exist: and no one can say that they were published after the fact, as we have the original documents. Here I would like to discuss a Biblical prophecy, remarkable for the fact that it predicts the coming of the Messiah 490 years in advance. It predicts the exact year Jesus was crucified. As this prophecy exists in the Old Testament, I am not sure how Jews interpret this one. Most ignore it, as they still expect a future coming of the Messiah. Daniel was a prophet in exile in Babylon, and had noted that there was a prophecy of Jeremiah where the Jews would live in exile in Babylon for 70 years:


In the first year of Darius the son of Ahasuerus, of the seed of the Medes, which was made king over the realm of the Chaldeans; In the first year of his reign I Daniel understood by books the number of the years, whereof the word of the LORD came to Jeremiah the prophet, that he would accomplish seventy years in the desolations of Jerusalem. (Dan. 9:1-2)

When the 70 years were completed (ca. 604 - 534 B.C.), Babylon fell to the Persians, and king Cyrus issued a decree allowing the Jews to return to the land of Canaan where they could worship Jehovah. As with all things in scripture, such historical events are symbolic and cyclical: the Jewish nation represents the Christian Church, "Jerusalem" its doctrine, and the number "7" a complete time period. This 70 years of captivity represents the time period that the Church would come under the dominion of the Papacy and Roman Catholicism. Thus, in the book of Apocalypse or Revelation, the apostle John sees a future spiritual Babylon which would come after the Roman Empire. Despite its efforts to promote Christianity, the Catholic Church errs in that it considers the authority of the priesthood higher than that of scripture, and used religion for the sake of self-dominion. This is what ancient Babylon did: religion was a means to obtain control over others, and have religion serve the interests of the state. To be fair the Catholic Church is correct as they do not separate faith from charity as the Protestants do. It is for that reason alone that there is more promise in the future that the doctrines of the New Church will be received among Catholics more so than Protestants.

The 70 years of captivity of the Jews in Babylon not only represents the future state of the church under the Roman Catholic Church, but also it represents a longer 490 year period for the Jewish church, or 70 years times 7. This is revealed in a vision by an angel to Daniel in the following passage:


Seventy weeks are determined upon thy people and upon thy holy city, to finish the transgression, and to make an end of sins, and to make reconciliation for iniquity, and to bring in everlasting righteousness, and to seal up the vision and prophecy, and to anoint the most Holy. (Dan 9:24)

The phrase "70 weeks" is literally translated as "70 sevens." Nevertheless, in Biblical prophecy, one day can signify a period of one year (Num. 14:34, Ezek. 4:4-6), so this means a period of 70 x 7, or 490 years. The "ending of sins" occurred when Jehovah became incarnate as Jesus, and was able to resist all temptation and sin, until He made His human Divine. The "anointing of the most Holy," a reference to the temple, signifies the establishment of the Christian Church. All prophecy was fulfilled with His coming, which is the meaning of the phrase "to seal up the vision and prophecy." The angel continues:


Know therefore and understand, that from the going forth of the commandment to restore and to build Jerusalem unto the Messiah the Prince shall be seven weeks, and threescore and two weeks: the street shall be built again, and the wall, even in troublous times. (Dan 9:25)

The decree to "restore and build Jerusalem" occurred in 457 B.C. under king Artaxerxes (see Ezra 7), when he issued a decree to allow the Jews to restore their worship under the leadership of Ezra. It is also under Ezra that the Biblical canon of the Old Testament became defined. "Jerusalem" does not just signify the literal city, but also the doctrine of the church, and in this case the Jewish worship was restored. The "seventy sevens" is divided into sub-periods: first, "seven sevens" (49 years), followed by "sixty-two sevens" (434 years). This is a total of 483 years, which from 457 B.C. comes to 26 A.D. This was the year in which Jesus began his ministry, and if I remember correctly it may have also been the year in which the restoration of the second temple was completed.


And after threescore and two weeks shall Messiah be cut off, but not for himself: and the people of the prince that shall come shall destroy the city and the sanctuary; and the end thereof shall be with a flood, and unto the end of the war desolations are determined. (Dan 9:26)

This predicts that soon after the public ministry of Jesus, he would be "cut off, but not for himself" - this predicts His rejection by the Jewish people, but He sacrificed Himself in order to save humanity. Forty years later, the Romans came and destroyed the Jewish temple in 70 A.D. "Desolations" refers to the complete lack of truth among the Jews, where they became rejected by God and were once again expelled from the land of Israel.


And he shall confirm the covenant with many for one week: and in the midst of the week he shall cause the sacrifice and the oblation to cease, and for the overspreading of abominations he shall make it desolate, even until the consummation, and that determined shall be poured upon the desolate. (Dan 9:24-27)

This refers to the last "week" of the prophecy: a period of seven years from 26 A.D. to 34 A.D. Jesus confirmed the covenant by fulfilling all things of the Word, but with His coming and the revelation of the spiritual Church, the Jewish form of representative worship came to an end. It was in the middle of this seven year period (31 A.D.) in which Jesus was crucified.  All in all, a highly accurate prophecy, which shows that Jesus is indeed the coming Messiah. The Jews don't recognize Jesus as such, because they were expecting a king to establish an earthly kingdom in which they would rule over the Gentiles, not a spiritual Church.

That Emanuel Swedenborg recognized the significance of this prophecy is shown in the following passages:


The number seven, as is known, was held to be holy, on account of the six days of creation, and the seventh day, which is the celestial man, in whom is peace and rest — the sabbath. Hence it is that the number seven so often occurs in the rites of the Jewish church, and everywhere is held to be sacred. Hence both greater and less intervals of time were distinguished into sevens, and were called weeks — as the long periods to the coming of the Messiah (Dan. ix. 24, 25) (Heavenly Arcana, n. 395)

In another passage, Swedenborg confirms that the phrase "to anoint the most Holy" (the inner sanctuary of the temple was called the "Holy of Holies" or the "most Holy") concerns the establishment of the Christian church. This is the true restoration of Jerusalem:


...seventy weeks and seven weeks signify the same as seven days, namely, the coming of the Lord. But as here there is a manifest prophecy, the times are still more sacredly and certainly designated by septenary numbers. It is evident then not only that seven thus applied to times signifies the coming of the Lord, but that the beginning also of a new church at that time is signified by the anointing of the holy of holies, and by Jerusalem's being restored and built. And at the same time the last vastation is signified by the words — "Seventy weeks are decreed upon . . . the city of holiness, to consummate the transgression, and to seal up sins." (Heavenly Arcana, n. 728.2).

Swedenborg confirms that the rebuilding of Jerusalem does not mean the literal rebuilding of its physical buildings and walls. Such a literal interpretation has led some to suggesting a false start date in the time of Nehemiah (ca. 445). As the city of Jerusalem signifies the doctrine of the church, the streets signify the truths which lead to God:


That "it shall be restored with street and moat" means that there will then be truth and good. That Jerusalem was not then restored and built, is well known; and that it is not to be restored and built anew every one may also know, if he does not keep his ideas on a worldly kingdom, but on the heavenly kingdom meant by Jerusalem in the internal sense. (Heavenly Arcana, n. 2336.3, see also n. 6508.4).

One question I always had, is why are the first 69 weeks (69 x 7, or 483 years) divided into 7 weeks and 62 weeks? The meaning of this can be derived from the symbolism of the numbers themselves:


Three and seven are holy, two and six which precede, are not holy, but relatively profane (Heavenly Arcana, n. 900)

Thus the division of the 69 weeks into 7 weeks and 62 weeks seems to represent a period of time in which that which is holy, or the souls who are good, are separated from those who are evil. In the parable of the wheat and the tares, the harvest is delayed until the wheat and the tares have blossomed, so that they could be distinguished from each other. The spiritual significance of this is that before any last judgment, there must be a period of time in which the good can be separated from the evil. These last judgments do not occur on earth, but in the spiritual world, a realm that lies between heaven and hell for those who are not ready to be judged yet. This is described in more detail in Swedenborg's visions.

So if in scripture there is a prophecy predicted the coming of Jesus over 500 years in advance - should we not pay more attention to the Bible?  This particular prophecy was the main piece of evidence I discovered that shows that it is Divinely inspired, before encountering the writings of Swedenborg.
Posted by Doug Webber at 10:08 PM