The Miraculous Circle of Light 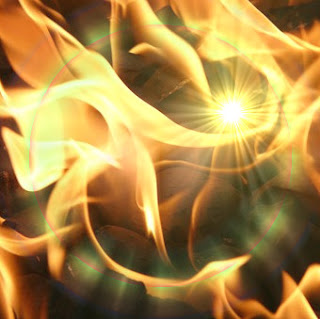 For this blog post, I was looking for a circle of people holding candles at night, and found this one, from SynchroSecrets, a blog on unusual coincidences which Carl Jung called "synchronicity."  Synchronicity is a meaningful coincidence.  Was it a coincidence I found that blog?  I don't know, but here is an image of a circle of candles lighted for a healing vigil: 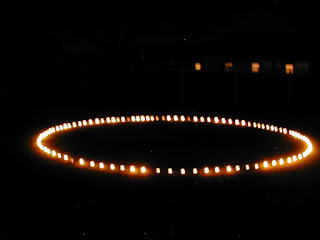 In ancient times, in the Middle East there was an ancient religion which preceded Judaism which saw synchronicity in everything: for everything material is a symbol of the heavenly form.  Such was the origin of symbolic rituals, for these rituals seek to recreate the symbols seen in visions, offering a link between this material world and the spiritual world beyond it.

So why was I looking for a circle of people holding candles?  A long time ago, as a child I was sent to a summer camp for a week which taught the Christian way of life. It was in a forest in California, and we slept in wood cabins.  In California I used to go on walks through the Redwood forest: 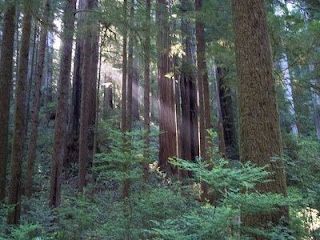 If you haven't been there, there is just no way to describe the mystical beauty of that forest.  The trees are huge, perhaps the largest trees in the world.  Anyway, at that Christian camp in the forest, towards evening they decided to hold a prayer vigil, and everyone was to stand in a circle holding candles.  However, I could not participate - I had caught a cold, and I was told to take a rest in the cabin.  I was a bit sad and disappointed, so I returned to the cabin. I was the only one who could not participate.  There was still light, it was towards the end of the day. I opened the cabin door to lie down on my bunk - but when I looked in, what I saw took me by surprise.

The cabin surrounded by trees had a window, and light was streaming into the window sort of like you see in the picture of the forest above.  It was a narrow band of light, which formed an elongated rectangle in that dark cabin.  But there was something odd about that band of light. It was moving. And it was moving in a circular pattern, so that there were these bands of elongated rectangles - not just one - rotating in a circle along the walls of the cabin.  I didn't know what to make of it: it was as if there was a light source, outside the cabin, moving in a circle around the cabin.  So I looked outside the cabin.  It is surrounded by trees, in the middle of a forest.  There are no light source other than the waning sun.  Ok, I open the door again. Yep, moving bands of light inside the cabin, still going around and around. As I looked at it, and there was no rotating light outside of the cabin, I concluded that something was bending the light to move in a circle.  I think I stood in the doorway for several minutes just staring, wondering what to do. I then realized this was happening at the same time everyone else was away, who had formed in a circle holding candles.  Then I got a bit scared - this should not be happening. I closed the door, wandered among the trees for a while, and came back later when all returned to normal.  I never told anyone about it, as I was puzzled by it.  It is one of those things that "should not happen" - and it is something I pushed back in the recess of my memory until I almost forgot about it. Not sure how I remembered it just now.  I still have no explanation for it, I have never seen light behave that way.

You are the light of the world. A city set on a hill cannot be hidden;Nor does anyone light a lamp and put it under a basket, but on the lampstand, and it gives light to all who are in the house. (Matt. 5:14-15)

So, maybe I was wrong to hide and forget this event?  I do not know. I think that over time I would have found a rational explanation for it, but there just isn't one. John, who saw a vision recorded in the Apocalypse or Revelation, recorded this event:

Then I turned to see the voice that was speaking with me. And having turned I saw seven golden lampstands;And in the middle of the lampstands I saw one like a Son of Man, clothed in a robe reaching to the feet, and girded across His chest with a golden sash. (Rev. 1:12-13)

Each lampstand or candle in this vision signified seven different types of churches, and Jesus had a message for each one.  All Christian churches - even the remote ones - is signified by one these churches in the book of Revelation.

When it comes to miracles, skeptics will always question, believers will see confirmation.  As miracles these days tend to not change anyone's former opinion, I see no harm in relating this story.  Here is Swedenborg's opinion regarding miracles:


"It is asked at the present day, why miracles do not take place as formerly; for it is believed that if they were to take place, every one would make hearty acknowledgment. For miracles are not now wrought as formerly, because they compel, and take away free will in spiritual things, and from being spiritual make man natural. Every one in the Christian world, since the coming of the Lord, may become spiritual, and he becomes spiritual solely from the Lord through the Word; and the capacity for this would perish if man were led to believe through miracles; since they, as before said, are compulsory and deprive him of free will in spiritual things; and every thing compelled in such matters betakes itself into the natural man, and shuts up the spiritual as with a door, the spiritual being truly the internal man, and deprives this of all power to see any truth in light; therefore he would afterwards reason about spiritual things from the natural man alone, seeing every thing truly spiritual inversely. But miracles were wrought before the coming of the Lord, because they of the church were then natural men to whom the spiritual things of the internal church could not be opened; for if opened, they would have profaned them. And all their worship therefore consisted in rituals which represented and signified internals of the church; and they could not be brought to observe those rituals properly except by miracles." (True Christian Religion, n. 501).

As Jesus once said:


Because you have seen Me, have you believed? Blessed are they who did not see, and yet believed. (John 20:29)

It is more important to reach internal spiritual understanding by reading scripture and living by it, than paying attention to external visible confirmations. Spiritual growth can then take place from that inner spiritual light in one's own understanding.

Well, back to working on that book for Apocalypse Explained...  maybe that's how I remembered this particular event.