Proof of the Afterlife...from a brain dead neurosurgeon

There are two "anomalies" whereby I think the proof of God exists, and our naturalistic world view falls apart:

1.  The existence of prophecy, whereby future events are revealed.
2.  Evidence of the afterlife, from those who were declared dead but revived by medical science.

At a younger age, I started with those two, as the evidence is there where we can examine the facts.  The term "Near Death Experience" was coined by Raymond Moody, who wrote a book called Life After Life which explains the process of dying.  It was through that book that I discovered Emanuel Swedenborg.  Death is actually a beautiful experience...many describe hovering over their body, and then they enter a tunnel at the end of which is a light.  Once absorbed into the realm of light, this Supreme Being of Light then provides a life review, where they review how each and every action has affected others. This life review happens in an instant.  And the overriding question is - not what you believe - but rather, what have you done with your life? 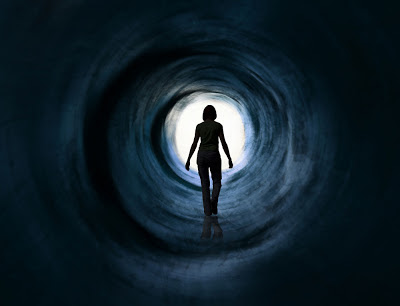 The most common scientific explanation I have heard to explain away this "anomaly" is that the Near Death Experience is the result of oxygen deprivation for the brain.  But there is a basic problem with this explanation.  Some people who have had a Near Death Experience not only have an out-of-body experience, but while out of the body they can describe events that have occurred outside the vicinity of their body.  Not to mention that they describe what was happening around them while they have no sensory perceptions - especially the comments of doctors that they hear while they are attempting to revive them.

In one of the more stranger cases I have heard, is one which regards Dr. Eben Alexander - a neurosurgeon who had a Near Death Experience.  He was utterly astounded by what he had experienced -- although he had heard of the phenomenon before, he had always thought there was a scientific explanation for the experience, and did not believe in it.  He then contracted a rare bacteria ( e coli meningitis) that had invaded his cerebrospinal fluid which then proceeded to eat his brain.  For seven days he was in a coma, and his entire neocortex was inactive - which is the part of the brain which controls thought and emotion.  Despite the fact he should have remembered and experienced nothing, he had a most remarkable Near Death Experience.  As a neurosurgeon, he has no scientific explanation for what he experienced.  The mortality rate for his illness is apparently 90%, and the doctors were dumbfounded at his complete recovery.  Normally, patients who have this illness remember nothing. 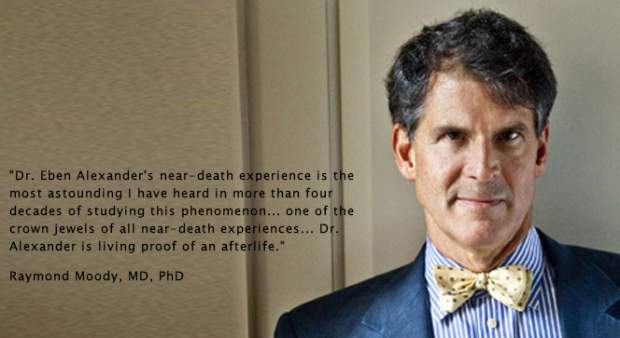 Here is a news video describing his experience:


Below is a longer interview of Dr. Eben Alexander by skeptiko.com.  One important thing to note: he wrote down his experience before reading anything on the Near Death Experience.  He begins by saying that with what we know about consciousness, the naturalistic or materialistic view of the universe is no longer valid.  The medical community treats the body as a biological robot, and death is the end.  There is a new understanding of consciousness taking place in the scientific community, where reductive materialism is seen as insufficient for explaining human consciousness.  He mentions the book Irreducible Mind: Toward a Psychology for the 21st Century to explain this new scientific view, based on empirical evidence.

The interview is an hour long, see my comments below if you want to skip it.

1.  The mind and consciousness are independent from the human brain. Thus life after death is possible. And this is a neurosurgeon speaking.

2.  He describes his experience as much more "real" and "vivid" than everyday life, so vivid that he calls it "hyper-real" and "intense".

3.  When asked if it was similar to a hallucinogenic experience from drugs, he comments that this experience was too real and interactive to compare it to a drug induced experiences.  Also, in the Near Death Experience, if it is hallucinogenic, that does not explain why people tend to remember encountering deceased loved ones.  Why would the brain be so selective in its memory-experience?

4.  In the first phase of his experience, which lasted a long time, he had no memory of his earthly life.  Nor could he remember his earthly language language.  He was initially in a primitive "earth-worm" state.

5.  He then hears a "spinning melody", which then opens up his vision.  He sees that he is a speck on a butterfly wing, flying through a paradise garden with waterfalls and pools of water.  Above arcs of beautiful light.  Sees millions of other butterflies.

6. Besides him on the butterfly wing was a beautiful blue eyed woman, a guardian angel.  She told him three things: You are loved.  You have no need to fear.  You can do nothing wrong.

7. In this world there is no space and time.  There is only a sequence of events.  There is no difference between one's internal state and what one experiences around them.

8.  He goes outside of this universe, into the "core" and sees a brilliant orb and light - the Divine presence.  The overriding purpose of everything: Love.

Dr. Eben Alexander also states that one does not have to come near death to have a "Near Death Experience" - there are many people in the past who have had mystical experiences similar to it.  Some studies have tried to replicate the Near Death Experience through lucid dreaming.  There is one mystic who seems to have been able to enter this reality at will: Emanuel Swedenborg.  He states he was able to enter the spiritual world for a period of 27 years.  Thus Swedenborg is able to describe in more detail the afterlife than those who have had an NDE.  So how does the experience of the neurosurgeon compare with what Swedenborg stated?  Lets look at what Swedenborg wrote according to the points that Dr. Eben Alexander brought up:

1.  Every person is a spirit as to his interiors.  The physical body is an outward manifestation of the spiritual body.  Mind, or consciousness, can exist independently from the human brain.  The reason?  The "soul" is a finer physical substance that does not interact with light.

2.  The spiritual world is more real and more bright than this one.  This is one that took even Swedenborg by surprise.  He said the other world is a thousand times brighter than this one.  Not only that, we will have a spiritual body with senses that are more exquisite than our physical ones.

3.  After death, we will be with those whom we love the most.  As everything in heaven is based on love, this is the reason why we immediately encounter departed relatives and friends.  Societies are formed based on those whom we love: from far away, these "globes" look like stars.  In the Bible, these are the "stars of heaven."

4.  Our mind has a higher intelligence, which originates from spiritual influx from God.  Humans, unlike animals, have a spiritual influx which allows them to live forever.  The natural mind we are born with, the lower animal mind, is full of evil.  It is the spiritual side of us which makes us good, which originates from God.  No one should feel proud of their own self-intelligence.  It is a gift.

5.  Physical life forms correspond to spiritual ideas of heaven.  The caterpillar, which transforms itself into a butterfly after a period of sleep, is symbolic of our own transformation into angelic beings after we have shed our physical bodies.  Thus he sees himself flying on the wings of a butterfly, where he encounters his guardian angel.

6.  There is a three-fold spiritual sense to all of Divine truth, and thus all of scripture.  Most of the volumes that Swedenborg wrote describe this three-fold sense of scripture, which is hidden behind the literal sense.  The angel told Dr. Eben Alexander three things: You are loved.  You have no need to fear.  You can do no wrong.  This reminds me of a nun I saw on a Catholic TV station who described an angelic encounter, which unfortunately I cannot track down. Again the angel said three things in one statement.  The angel stated, God is present where he is loved, where he is worshiped, and where He is welcomed.  In this three-fold sense in all of Divine Truth, the first sense which is the highest related to love, the second relates to truth, and the lowest sense obedience to God's commandments.  The angel in Dr. Eben Alexander's NDE stated, You can do no wrong.  Swedenborg describes how we enter an angelic state, and although we are still not perfect, we are held in restraint from our lower imperfections.

7.  In heaven and the spiritual world, there is no space and time.  Swedenborg stated that in place of time, there are changes of state.  In place of space, distances are determined by how much we love another person.  This matches exactly what was stated by Dr. Eben Alexander.

8.  At the center of heaven, there is a spiritual Sun which provides heaven its light and existence.  In the center of this spiritual Sun is the "God-Man".  Dr. Even Alexander describes this as the spiritual "core" which lies outside the universe. We are all linked to this "God-Man" as we are created in His image.  And the purpose of creation?  God is Love itself.  The reason for creation was so God could love someone outside of Himself.


UPDATE: A STRONGER CASE OF THE AFTERLIFE

A stronger case from a neurosurgeon for consciousness and life after death comes from the case of Pam, who had her heart stopped and blood drained out of her brain, and all neural activity of the brain was stopped. The reason why I say its a stronger case is that the Near Death Experience occurred under monitored conditions, and Pam should have had no consciousness. Moreover, she was able to describe the operating room as she popped out of her body, and could hear them talking and see what they were doing.

Also see this interview with Dr. Lloyd Rudy, a pioneer in cardiac surgery. Doctors cannot explain how these patients are completely aware of their surroundings - and beyond that - after they are clinically declared dead:

Email ThisBlogThis!Share to TwitterShare to FacebookShare to Pinterest
Labels: Near Death Experience, Swedenborg