A Clairvoyant Dream...of a Divining Rock

A few days ago I had what seemed to be a nonsensical dream about a friend of mine, where he collected rocks and sand on a beach by the ocean, where there was a building on top of piers jutting out over the water.  Someone took away the sand, but allowed him to keep the rocks.  He had a bucket of these rocks, and then showed me one of them.  He said that this particular rock was ancient...and was a "space rock" - a rock that had fallen to earth from outer space.  I looked at the rock, and in the dream it looked nothing like a meteorite.  It was disk shaped, except that it had a thick edge.  The front and back was flat and smooth.  The center of it was white, but towards the outer edges the color changed to sort of orangish-purple, growing darker towards the outer edges.  Angling it reflecting it in the light showed some blue - sort of rainbow like.  I looked at some images of rocks, and the closest I could find is a sliced geode of agate rock, sort of like this picture: 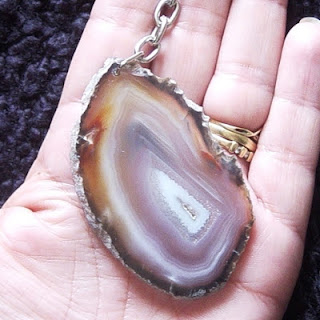 In the dream I then turned the rock on its edge, and saw a series of petroglyph symbols written on the side.  At first I thought these were ancient symbols, but the symbols shifted and they became more modern.  I told him, unfortunately, this rock was not ancient - it is probably modern.  And also, it was probably thrown away by someone in the building on the pier who had tossed it over, after which it got buried in the sand.  He was a bit upset he never noticed the petroglyphs, as he never had bothered to turn the rock on its side.  The dream ended - at least that is what I remembered of the dream.  I sent him an email stating I had a dream about him, and almost forgot about.

Today he gave me a call.  He wanted to know the dream - so I described it as just above.  The day after I had the dream I had sent him a manuscript on Nostradamus and Swedenborg, how they both made use of their dreams.  Nostradamus used dreams and visions to foresee the future, whereas Swedenborg made use of dream-analysis to introspect his own soul, until his inner vision was opened.  That day he was teaching a class on symbols and dreams...and the topic of the lesson was divining rocks - using rocks to divine answers to one's question or the future.  It is a very ancient custom.  He received my manuscript that day and had been thinking about how he could make use of some of the material in the class.  Moreover, he has a collection of these divining rocks.  A few of them he got in a bazaar in Iran from a seller who was going to throw them out.  And outside of his house - he currently has buckets of these divining rocks he has collected!  Ok, this dream was significant after all.

These clairvoyant dreams happen all the time, and people just do not realize it.  They would realize it more if they just paid attention, and shared them with others.  There are previous blog entries in this blog about some dreams of mine I had earlier - one concerns a clairvoyant dream concerning the attack of September 11, and another concerning the election of Pope Benedict XVI.  We are all connected in the spiritual world: the more you think about another person, the closer you will appear to that person.  Our focus, our intentions, the connections we make with other people determine the kinds of dreams that we have.  And the dreams tend to be symbolic.  This one, however, was quite straightforward after I described it to him.

Rock divination?  I honestly never heard of it.  I heard of divination by tea leaves, coffee cups, bones, animal organs...but never rock divination.  "Star" divination is the most common form people know, otherwise known as astrology.  How does it work?  This world is a symbolic form of the heavenly world.  "Divination" is typically looked upon as a taboo subject in modern religions, but it was typically forbidden as the belief systems of many peoples of the time had been corrupted.  But these methods of divination were based on an ancient system of knowledge involving symbols - symbols that had been revealed in dreams and visions.  The Philistines practiced it to figure a way to return the stolen Ark of the Covenant back to the Israelites.  We connect with the spiritual world through these symbols and rituals involving them.  The modern Christian Church practices it without even knowing it.  It is called Communion, or the Eucharist.  It is highly symbolic, and through that symbolic ritual a connection with heaven is made.

So, what is rock divination?  Here is a random quote on the topic by Howard G. Charing in an article on Shamanic Divination:

"The shamans used many diverse methods for divination, either ways seeking patterns in natural objects and events, or using techniques to directly obtain hidden knowledge. An example of the former could be the practice of divination with rocks.

"To do this the traditional practice is for the seeker looks for a rock whilst holding the question in the mind, eventually there will be a rock which stands out or ‘metaphorically’ shouts out “me, me!". Here is an opportunity to practice the principle of trust!. As a helpful tip the more faceted and inner forms the rock has the better as more facets and patterns mean more detail will be available to the reader. The seeker should then give the rock to the shaman or practitioner and state the question. The shaman (who knows as little as possible about the questioner or the circumstances regarding the question) will gently focus on the rock and allow patterns to form within the imagination. The shaman may ask the seeker to state the question a few times as this helps to deepen the trance state of awareness, to the place where the shapes and patterns in the rock become a ‘gateway’ directly into the universal field of energy, and images, pictures, words, feelings will start to form within the shaman’s being. Each rock face represents a different aspect of the question, and the initial response is generally “where the questioner is at this moment", and this leads to other rock faces, each rock face exposing and presenting an expanded view of the answer. To me personally this work is awesome, mysterious and poetic, and I have found that is as if a person’s life story is contained in a rock."

Ok, interesting.  So I was looking at a divining rock, in a dream, without even knowing it.  But the dream had already told me that: it had said it was a "space rock", or a meteorite. In ancient cultures, meteorites that had fallen from heaven were considered rocks of the gods, and were often worshiped or had a ritualistic significance.  There is apparently a meteorite that is in the Kaaba that is still venerated in Islam, believed to have come from the time of Adam.  Thus such a "divine rock" was a divining rock in the dream.

Not exactly the blog entry I was planning next, but this one just spontaneously came up. Looks like I am going to dig up some research material for him on this class on symbols and dreams. 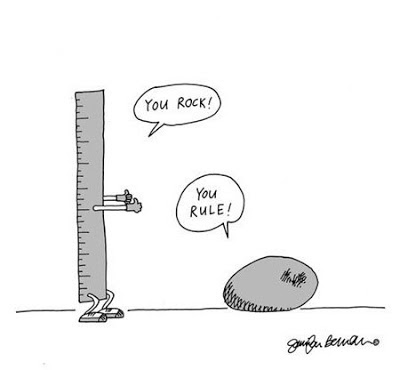