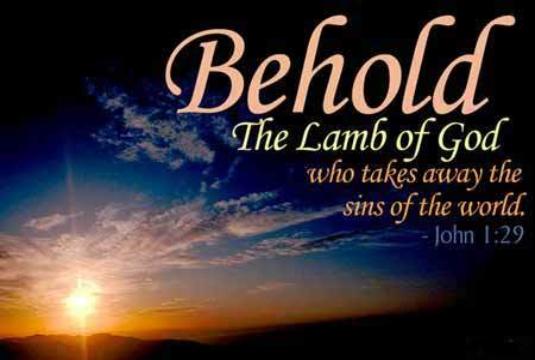 In the book of Revelation, which speaks of the end times of the Christian church, it speaks of Jesus as the "lamb slain from the foundation of the world" on two occasions (see Rev. 13:8, 17:8). So what is the meaning of this phrase? But first, why is Jesus called the "lamb of God"? It is because in the spiritual sense, the lamb signifies innocence:


"That lambs signify innocence may be evident from many passages in the Word, of which the following may be adduced in confirmation — in Isaiah: The wolf shall dwell with the lamb, and the leopard shall lie down with the kid; and the calf and the young lion and the fatling together, and a little child shall lead them (xi. 6) — where the subject is the Lord's kingdom, and the state of peace and innocence therein. The wolf stands for those who are against innocence, and the lamb for those who are in innocence. So again, in the same prophet: The wolf and the lamb shall feed together, and the lion shall eat straw like the ox, and dust shall be the serpent's meat. They shall not hurt nor destroy in all the mountain of My holiness (lxv. 25) — where the wolf stands as above for those who are against innocence, and the lamb for those who are in innocence. As the wolf and the lamb are opposites, the Lord also said to the seventy whom He sent forth, Behold, I send you forth as lambs in the midst of wolves (Luke x. 3). In Moses: He maketh him to suck honey out of the rock, and oil out of the flinty rock; butter of the herd, and milk of the flock, with fat of lambs and of rams, the sons of Bashan (Deut. xxxii. 13, 14). Here in the internal sense the celestial things of the Ancient Church are treated of, and the fat of lambs stands for the charity of innocence." (Heavenly Arcana, n. 3994.3)

True charity and love can only exist from innocence, and the Lord is innocence itself:


"Since the Lord is innocence itself, which is in His kingdom, the all of innocence being from Him, He is therefore called the Lamb — as in John: The next day John the Baptist seeth Jesus coming unto him, and saith, Behold, the Lamb of God, that taketh away the sin of the world (i. 29, 36). And in the Apocalypse: They shall war with the Lamb, and the Lamb shall overcome them, for He is Lord of lords and King of kings; and they who are with Him are called, and chosen (xvii. 14, and elsewhere in the Apocalypse, as chap. v. 6; vi. 1, 16; vii. 9, 14, 17; xii. 11; xiii. 8; xiv. 1, 4; xix. 7, 9; xxi. 22, 23, 26, 27; xxii. 1, 3). That in the supreme sense the paschal lamb is the Lord, is known; for the passover signified the Lord's glorification, that is, the putting on of the Divine as to the Human; and in the representative sense it signifies man's regeneration, and the paschal lamb signifies that which is the essential of regeneration, namely, innocence; for no one can be regenerated except by charity in which there is innocence." (Heavenly Arcana, n. 3994.6)

It is only in innocence that one can be regenerated, thus John 1:29 declares Jesus as the lamb of God that takes away the sins of the world.  Sins are only removed by repentance (see The Two Essentials of True Christianity, where one must identify specific evils and remove them by means of the truth which fights against falsehood. Extreme repentance must go through a period of doubt and temptation. But modern false churches teach sins get automatically removed by man doing nothing except lip confession. Man must remove specific sins as from himself, but it is the Lord who fights for him or her in removing the sins from within in innocence. This the Lord can do directly as He made His human Divine, and works within us through our actions via the Holy Spirit which proceeds from His Divine Human.


WHAT DOES SLAIN FROM THE FOUNDATION OF THE WORLD MEAN? 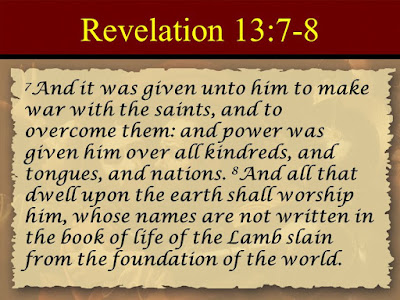 In the end times two false systems of religion will arise which will have corrupted Christianity and destroy it: on the one hand the priesthood of Roman Catholicism would distort Christianity and use it as a means of exercising religious power and authority for the sake of self rule. On the other hand Protestants would arise and make faith alone primary, and destroy the essence of Christianity which is love and charity, for without work in act faith is nothing. The latter is described in the book of Revelation as the Dragon, the Beast, and the False Prophet.


"This New Church is the crown of all the churches which have hitherto existed on earth, because it will worship one visible God in whom is the invisible, like the soul in the body. Thus and not otherwise can there be conjunction of God with man, because man is natural and hence thinks naturally, and the conjunction must be in his thought and thus in his love's affection, which is the case when he thinks of God as man. Conjunction with an invisible God is like that of the eye's vision with the expanse of the universe, of which it sees no end; it is also like vision in mid ocean, which falls upon air and sea and is lost. But conjunction with a visible God, on the other hand, is like seeing a man in the air on the sea, spreading forth his hands and inviting to his arms. For all conjunction of God with man must also be reciprocally of man with God, and there cannot be this reciprocation on the other part except with a visible God. That God was not visible before the assumption of the Human, the Lord Himself also teaches in John: Ye have neither heard the Father's voice at any time, nor seen His shape (v. 37); and in Moses it is said that no one can see God and live (Exod. xxxiii. 20). But that He is seen through His Human is taught in John: No one hath seen God at any time, the only begotten Son who is in the bosom of the Father, He hath declared Him (i. 18). And in the same: Jesus said, I am the Way, the Truth, and the Life. No one cometh to the Father but by Me. He who knoweth Me knoweth the Father, and he who seeth Me seeth the Father (xiv. 6, 7, 9). That there is conjunction with the invisible God through Himself visible, that is, through the Lord, He Himself teaches in these passages: Jesus said, Abide in Me and I in you; he who abideth in Me and I in him, the same bringeth forth much fruit (xv. 4, 5). At that day ye shall know that I am in My Father, and ye in Me, and I in you (xiv. 20). And the glory which Thou gavest Me, I have given them, that they may be one, even as we are one; I in them, and Thou in Me; that the love wherewith Thou hast loved Me may be in them, and I in them (xvii. 22, 23, 26; see also vi. 56). Moreover, it is taught that He and the Father are one, and that in order to have eternal life one must believe in Him." (True Christian Religion, n. 787)

To teach that God is One in one person Jesus Christ, and that His Human is Divine, is in conflict with the false teaching of other churches that divides God into three into a form of tritheism in the mind, even though they say God is one with the mouth. And so they do not even know to whom they should direct their prayers, and Roman Catholics even direct prayers to Mary and the saints. This revelation that God is one person in Jesus Christ is a declaration of this new revelation from heaven, which is described in the Apocalypse: Behold, He cometh with the clouds; and every eye shall see Him, and they who pierced Him: and all the tribes of the earth shall wail because of Him (Rev. 1:7). This is explained as follows:

Some may be disturbed when they discover that what they thought was true is actually a false teaching. However it was foretold that when Jesus would come, there would be no truths left in the former churches: when the Son of Man comes, will he find faith on earth? (Luke 18:8). 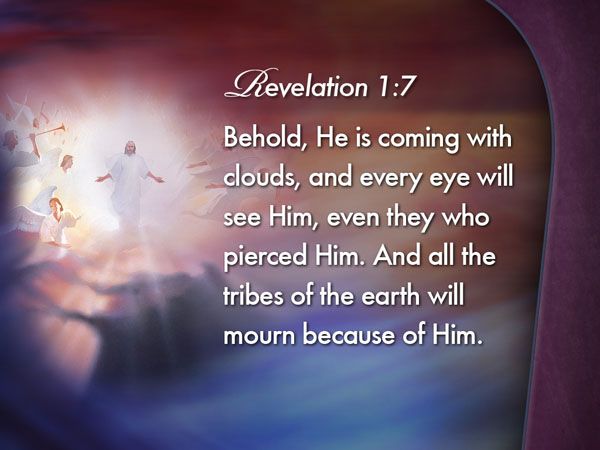