The Spiritual Meaning of Works in Scripture, and Why Protestants have it Wrong 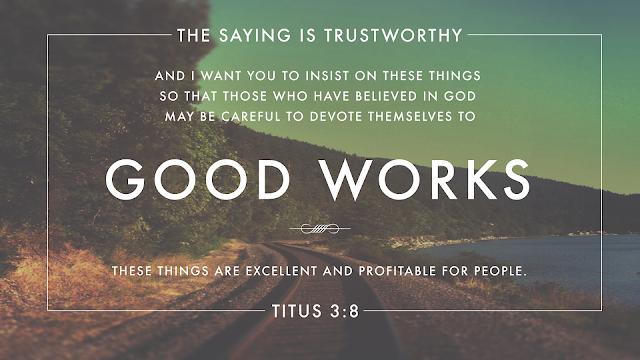 The Protestant churches have committed a major error which is the foundation of their theology, in which they have misinterpreted the meaning of the "works of the law" in the letters of the apostle Paul.  The end result is that many (not all) have made religion one of belief alone, and that they do not have to do anything with their lives.  And yet scripture says all will be judged according to their works (see Matt. 16:27).  If all are judged according to their works, how is it that Paul says we are justified by faith without works of the law? I bring this up because this became a matter of discussion for the "life review" we will all experience after death, which I describe in the previous blog post The Life Review of the Near Death Experience and the Visions of Swedenborg, as well as The Christianity of the Being of Light of the Near Death Experience.  What the Near Death Experience shows is that God cares about what we do with our life, and we will be held accountable for what we do with our life.  It is not about one's belief. It is about how we love others.

This issue of "works" comes up repeatedly in discussion with Protestants. What many do not understand is the word "works" is used in different contexts in scripture, and in each context it has a completely different meaning.  There are three main definitions of works, and the same word is used in all contexts:


I will repeat this again: in the letters of Paul, Paul speaks of works of the rituals of the Mosaic law, which have been abrogated.  Unfortunately a large number of Christians thinks that Paul is speaking about all works in general, and thus they have made religion one of praise and lip service only.  Many Protestants in particular think all works are by nature self-meritorious or hypocritical (#2 above) and they completely forget about works done out of faith.

Instead of completely repeating myself, I recommend for anyone interested to explore the following posts in which I discuss Protestant theology:

The Fallacy of Salvation and Justification by Faith Alone - explains how Jesus condemned belief alone. How "faith" is not just merely belief, but means "living by the truth." How Protestants falsely teach the will of each person is passive instead of active.

Is Salvation a Free Gift? - explains the fallacy of the teaching that one must do nothing to enter heaven.  A covenant is a TWO WAY relationship, and is based on love and doing God's commandments.

The False Theological Definition of the word "Grace" - Grace does not mean "unmerited favour." This is a false theological definition invented by Protestants.

The Fundamental Error of the Protestant Faith - this lists multiple quotes from scripture, showing that a spiritual life is not just a belief system in the memory. It is a life of works according to faith.

The Error of the Protestant Churches - this again explains what Paul meant by "works of the law."

A New Perspective on Paul and the New Church Perspective on Paul - Protestant theologians have comes to realize, from indisputable research on Jewish religion of the first century A.D., that Paul was talking about the rituals of the Mosaic law. But Swedenborg pointed this out over 250 years ago.

The Prophecy of Pauline Christianity - this discusses how scripture foresaw how the false teaching of belief alone would come to invade and destroy the church from within.

One interesting view I have heard from a Protestant is that New Church theology is a blatant form of Pelagianism.  This was new to me.  So I looked up what Pelagianism was, I had never heard of it.  From Pelagianism:


Pelagianism is the belief that original sin did not taint human nature and that mortal will is still capable of choosing good or evil without special divine aid. This theological theory is named after the British monk Pelagius (354–420 or 440), although he denied, at least at some point in his life, many of the doctrines associated with his name. Pelagius taught that the human will, as created with its abilities by God, was sufficient to live a sinless life, although he believed that God's grace assisted every good work. Pelagianism has come to be identified with the view (whether taught by Pelagius or not) that human beings can earn salvation by their own efforts.

Note the last sentence: opposition to any effort by someone to obtain salvation.  Swedenborg did not discuss Pelagianism directly, but merely lists it as a heresy in Apocalypse Revealed.  Anyone familiar with what was taught in the New Church theology knows that it has nothing to do with Pelagianism.  Here is what the New Church teaches:


This is spelled out in more detail in the works Doctrine of Life and Doctrine of Faith, which are both found in the work Doctrines of the New Jerusalem.

Protestant theology, in its worst form, declares the will of a man passive, that God does everything through the Holy Spirit.  But we are not passive, our will is active.  There is an influx of Divine good into our will inasmuch as we receive it, and do it.  For that is the nature of love: it desires to do good, to make others happy, in outward act.


ARE WE CAPABLE OF GOOD?

Having been introduced to Protestant theology, I can tell you that most Protestants are introduced to Christianity through the writings of Paul, especially the book of Romans and Galatians.  And here it is not understood that Paul was writing against the Judaizers, who kept trying to get the early Christians to follow the rituals of the Mosaic law.  But there is an interesting quote that Protestants will use, to indicate that each person has no capacity to do good:


For if the truth of God hath more abounded through my lie unto his glory; why yet am I also judged as a sinner?
And not [rather], (as we be slanderously reported, and as some affirm that we say,) Let us do evil, that good may come? whose damnation is just.
What then? are we better [than they]? No, in no wise: for we have before proved both Jews and Gentiles, that they are all under sin;
As it is written, There is none righteous, no, not one:
There is none that understandeth, there is none that seeketh after God.
They are all gone out of the way, they are together become unprofitable; there is none that doeth good, no, not one. (Rom. 3:7-12)

This passage is interesting. Throughout the letters of Paul, Paul is constantly defending himself against being a liar, but in verse 7, he actually admits to having committed a lie.  There is actually a bit of historical evidence of a big conflict between the apostle Paul and the apostle James - for more information on this, see Christus Victor, Pauline Christianity and the Dead Sea Scrolls.  Another interesting point here is that in Rom, 3:13-18 Paul is quoting the Septuagint version of Psalm 14, which contains 8 lines not found in the Masoretic and were a later addition. But besides that, what of this verse from the Psalm:

Does this mean that no one can do any good, and that thus works are of no account?  No.  This is an example of how a verse taken out of context can be distorted.  Psalm 14 begins as follows:

Thus the Psalm is speaking of those who do not believe in God, and do everything for their own self.  These become self-meritorious or hypocritcal works, depending on the intent. Thus they are incapable of doing good, for actions are judged according to intent, and anything done for selfish purposes is regarded as evil, not good.  That this is so, is shown by other passages:

This is an acknowledgment that one's good originates from God.  We are but recipients of it.  But we are not passive recipients, for the will by nature is active.  Jehovah is Divine Love, which flows into the Lord as to the Divine Human (Heb. Adonai), and from the Lord flows into us through our will.  One must seek good from the Lord, and not from the selfish ego:

And who says we should not do good?  That is against all of scripture, and destroys Christianity from within.  That it is not true, and a false teaching, can be shown from this verse:

So telling people that they must do good, by refusing evil, and following the commandments, is not Pelagianism.  It is the Christian way of life.  It is an active effective Christianity, one that is useful not only in this life but the life to come.  When one understands that one's good and truth are from the Lord alone, he or she then give glory and honor to the Lord alone:


“By giving to the Lord glory and honor nothing else is meant in the Word but to acknowledge and confess that all truth and all good are from Him, and thus that He is the only God; for He has glory from the Divine truth and honor from the Divine good. These things are signified by glory and honor in the following passages: Jehovah made the heavens; glory and honor are before Him (Ps. xcvi. 5, 6). O Jehovah God, Thou art very great; Thou art clothed with glory and honor (Ps. civ. 1). The works of Jehovah are great; glory and honor are His work (Ps. cxi. 2, 3). Glory and honor Thou layest upon Him, blessings for ever (Ps. xxi. 5, 6). These things are said of the Lord. Gird Thy sword upon Thy thigh, O mighty in glory and honor; in Thine honor mount up, ride upon the Word of truth (Ps. xlv. 3, 4). Thou hast made him little less than the angels; Thou hast crowned him with glory and honor (Ps. viii. 5). The glory of Lebanon hast Thou given unto it, the honor of Carmel and Sharon: they shall see the glory of Jehovah, and the honor of our God (Isa. xxxv. 1, 2). These and the foregoing are concerning the Lord; besides other places, as Ps. cxlv. 4, 5, 12; Apoc. xxi. 24, 26. Besides, where the Divine truth is treated of in the Word, the word glory is used (n. 629); and where the Divine good is treated of, honor.” (Apocalypse Revealed, n. 249)