The Spiritual Symbolism of Psaltery of the Psalms, and the 10-String Yepes Guitar 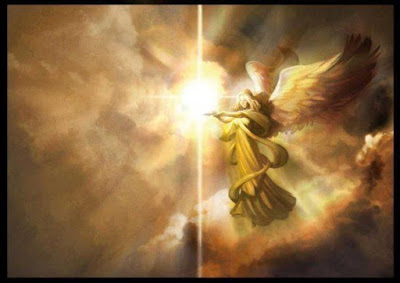 I have been editing a gigantic spiritual commentary on the Psalms, which is a new translation that is closer to the Hebrew and contains over a 1000 page commentary from Swedenborg's writings.  As I was going back checking the translation and commentary one musical instrument of the Psalms caught my attention: "psaltery."  I was not exactly sure what it was, and Biblical translators were not exactly sure what it was either.  If we check the definition in Wikipedia's article Psaltery, it says this:

Of these, the Aramaic word pesanterin in Daniel is probably from a Greek loan-word psalterion, a harp like instrument.  For that Aramaic word in Daniel psaltery is thus a correct translation.  Here is an picture of it on a Greek vase: 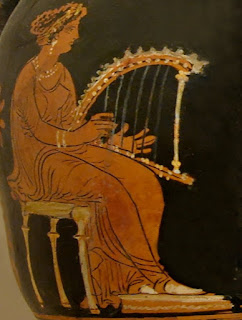 So that is relatively straightforward, but the word of interest for my translation is the Hebrew nevel, which is also translated as "psaltery."  The word psaltery is a mistranslation, and there are many mistranslations within the Psalms which caused me to start this project on the Psalms in the first place.  If we look at the Brown-Driver-Biggs Hebrew lexicon, the word can mean a skin bottle, a jar, or a pitcher.  Some translators thus assume it must mean a lyre, similar to a harp, as it has a similar shape to a jar.  In other cases, it is translated as a viol.  Not initially knowing what nevel was, I initially went with "lyre" even though in many contexts nevel is mentioned right along with a harp.


A REVELATION FROM SWEDENBORG ON "PSALTERY"


“That singing and its like signifies what is spiritual has also been evident to me from angelic choirs, which are of two kinds, celestial and spiritual. Spiritual choirs, from their vibratory singing tone, to which the sound of stringed instruments can be compared, are very different from the celestial…“As celestial things are holy things of love and the goods therefrom, so spiritual things are truths and goods of faith; for it is of faith to understand not only what is true, but also what is good. Knowledges of faith involve both. But to be such as faith teaches is celestial. Because faith involves both, they are signified by two instruments, the harp and the pipe. The harp as is well known is a stringed instrument; and it therefore signifies spiritual truth. But the pipe is intermediate between a stringed and a wind instrument; and therefore it signifies spiritual good.” (Heavenly Arcana, n. 418-419)


For harps, in multiple passages Swedenborg states that they represent musical worship from spiritual truth.  But for the word nevel, which Swedenborg also translated as "psaltery," he says something different: instruments of psaltery represent spiritual good.  This means the Hebrew nevel is a cross-over instrument: it must be both a wind and stringed instrument.  That means it is not a lyre or harp.  Perhaps a bagpipe?  I then double-checked the Brown-Driver Biggs lexicon and found this entry for nevel:

I then realized nevel is not a lyre, it is a lute.  The Hebrew word nevel is probably taken from the Egyptian word nfr which means lute.  A lute has both strings, and makes use of the resonating sound of its interior, which is in the shape of a jar or bottle.  This, of course, was completely unknown in Swedenborg's time as Egyptian hieroglyphs were undeciphered until the 19th century.  I found a few other examples of this, where Swedenborg retained the mistranslation, but from looking at the original Hebrew in his spiritual visions he was given the true spiritual meaning.  This has been an interesting discovery from correcting the translation of the Psalms.  Here is a picture from a tomb of Egyptian women playing on their lutes: 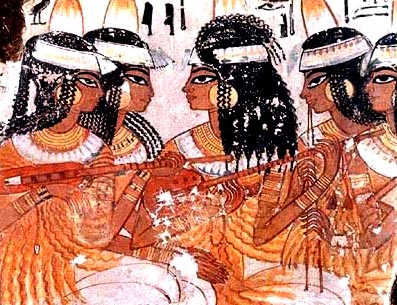 A LUTE OF TEN STRINGS

So, the "psaltery" of the Psalms are lutes.  I then noticed that in three cases, the lute (Hebrew nevel) is mentioned with an instrument of 10 strings.  Here are the passages as translated in the King James Version:


Praise the LORD with harp: sing unto him with the psaltery and an instrument of ten strings. (Ps. 33:2)

Upon an instrument of ten strings, and upon the psaltery; upon the harp with a solemn sound. (Ps. 92:3)

I will sing a new song unto thee, O God: upon a psaltery and an instrument of ten strings will I sing praises unto thee. (Ps. 144:9)

The word "instrument of ten strings" in Hebrew is simply the number 10.  However, notice how the KJV translators added the word "and" in Ps. 33:2 and 144:9.  It is not there in the original.  For Psalm 33:2, here is the corrected translation:


Confess Jehovah with harp,Make music to Him with a lute of ten strings. (Ps. 33:2)

In other words, by adding the word "and" the translators have completely missed the point that Ps. 33:2 and 144:9 are both definitely talking about a lute of 10 strings.  As for Ps. 92:3, that is also probably talking about a lute of 10 strings but it is worded separately to correspond with its parallel line.  This is the only case in scripture where it is pointed out that the musical instrument has 10 strings.  I then asked the question: is the number 10 important in music?  Is there something significant to a 10 stringed lute?

THE 10 STRING CLASSICAL GUITAR OF YEPES 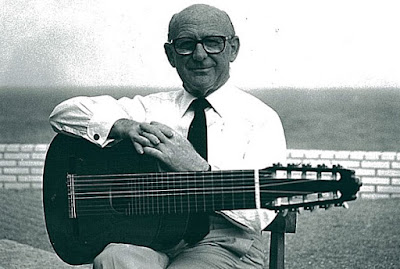 Here is a diagram of the tuning of the 10 string Yepes guitar:

From Narciso Yepes's Innovation of the Classical Guitar:

Here is the other reason for the 10 string guitar - with it, it is easier to play Baroque lute music:

'Another reason for the 10-string is that guitarists are always playing music written for the Renaissance or the Baroque lute. We can say that the lute is to the guitar as the harpsichord is to the piano. And if this is true, how can we take the music written for these eight, nine, or 10-course instruments - even [eleven,] thirteen and fourteen courses, in the case of the baroque lute - and transcribe it for a guitar, which has only six strings? [...] I want to be able to make "legitimate" transcriptions in which the music loses nothing, but rather improves in quality.'

What is sympathetic resonance?  Here is a brief description:

Sympathetic resonance or sympathetic vibration is a harmonic phenomenon wherein a formerly passive string or vibratory body responds to external vibrations to which it has a harmonic likeness. The classic example is demonstrated with two similar tuning-forks of which one is mounted on a wooden box. If the other one is struck and then placed on the box, then muted, the un-struck mounted fork will be heard. In similar fashion, strings will respond to the external vibrations of a tuning-fork when sufficient harmonic relations exist between the respective vibratory modes. A unison or octave will provoke the largest response as there is maximum likeness in vibratory motion. Other links through shared resonances occur at the fifth and, though with much less effect, at the major third. The principle of sympathetic resonance has been applied in musical instruments from many cultures and times.

Here is a video of Narciso Yepes playing Romance Anonimo:

Here is another of Yepes playing Marcha Irlandesa (Siglo XI):

Was the 10 string lute tuned in this manner?  We have no way of knowing, as much of the original music of the ancient world has been lost.  But the principle of resonance can be heard by all skilled musicians, and has been used since ancient times.  The oldest song in the world is a Hurrian hymn, dating to 1400 B.C., and was made for a nine-stringed lyre or harp on a heptonic scale.  It even contained instructions for tuning the harp.  Here is a rendition of the notes found on the cuneiform tablet:


THE SYMBOLISM OF A LUTE OF 10 STRINGS

Let's assume for the moment that in ancient times, they followed the principle of resonance and tuned a 10 stringed lute in such a manner.  In the Yepes guitar, some strings are played and others are passive which resonate.  From Ten-string guitar:

“That a witness means confirmation of good by truth, and of truth by good, and that hence a testimony means good from which truth is, and truth which is from good, may be evident from the Word in other passages… That a testimony is good from which is truth, and truth which is from good, follows from the above, and also from this, that the ten precepts of the decalogue written upon the tables of stone are called in one word the testimony — as in Moses: Jehovah gave unto Moses, when He had made an end of speaking with him upon mount Sinai, the two tables of the testimony, tables of stone, written with the finger of God (Exod. xxxi. 18). ...The precepts of the decalogue were therefore called the testimony, because they were of the covenant, and thus of conjunction between the Lord and man; which conjunction cannot exist unless man keeps the precepts, not only in external form, but also in internal. ...Because this is so, the tables were also called the tables of the covenant, and the ark the ark of the covenant. From this it is now manifest what is signified in the genuine sense by testimony in the Word (as in Deut. iv. 45; vi. 17, 20; Isa. viii. 16; 2 Kings xvii. 15; Ps. xix. 7; xxv. 10; lxxviii. 5; xciii. 5; cxix. 2, 22, 24, 59, 79, 88, 138, 167; cxxii. 3, 4; Apoc. vi. 9; xii. 17; xix. 10).” (Heavenly Arcana, n. 4197.8-9)