The Spiritual Symbolism of the 10 Commandments

...the angels have lamented before the Lord that when they look into the world they see nothing but darkness, and among men no knowledge of God, of heaven, and of the creation of nature, on which their angelic wisdom may rest. (Divine Love and Wisdom, n. 284)

So Swedenborg wrote in his work Divine Love and Wisdom, indicating a general lack of knowledge of spiritual matters in a materialistic world. The purpose of the work Divine Love and Wisdom is to described the true nature of God Himself. God is not only love and truth itself, but as He is love and truth, He is a personal supreme being. Swedenborg goes on to describe how the spiritual world is outside of time and space, and yet flows into natural forms in all their aspects. The objective of creation is to return back to the Creator from which it came. To do this, we have to subdue the desires of our selfish ego. Once the ego is subdued, and we start looking outside of our self towards others, God's spirit can flow into us. As spiritual beings, we become moral beings.  As these spiritual and moral laws are described in the 10 commandments, I thought I would discuss some of the symbolism contained within them. Most probably think these are just simple moral rules - which they are - but contained within them is a deeper spiritual symbolism.

THE SYMBOLISM OF THE 10 COMMANDMENTS

If we examine the 10 commandments, the first are summed up as love towards God, and the latter are summed up as love towards the neighbor. And it was on these two commandments that Jesus said hang all the law and the prophets. The 10 commandments are as follows:
Catholic and Lutheran churches do not enumerate the 10 commandments properly: they consolidate commandments #1 and #2 into one, and artificially split the command not to covet into two separate commandments, and unfortunately Swedenborg followed this tradition. Once enumerated properly, one can discover that there is a correspondence between the first and second tablet, where we discover that in the highest spiritual sense, God is our neighbor, we love Him by loving others (see Matt. 25):

In a spiritual sense God Himself is our Father, is shown in the Lord's prayer, how we are to pray to Him calling him our Father. It is through obedience to Him that we become children of God, rather than mere natural children to our parents. That the spiritual meaning of honoring the father and mother means to honor God and the church, is shown by the promise in the commandment:


Honor your father and your mother, that your days may be long upon the land which the LORD your God is giving you. (Ex. 20:12)


I am the LORD your God, who brought you out of the land of Egypt, out of the house of bondage. You shall have no other gods before Me. (Ex. 20:2-3)

Egypt here, in the spiritual sense, represents slavery to sin. The Israelites were brought out of Egypt into the land of Canaan - this shows that commandment #5 corresponds to the first commandment.

The correspondence between the first commandment and commandment #6, do not murder, is easy to see, when we know that God is the origin of all life, and is life itself. That God is life, and life forms are mere recipients of that life, is shown in the following passages:

And note that Jesus said he is not a recipient of life, as other life forms, but is the originator of all life:

In scripture idolatrous worship is referred to as acting like a harlot or behaving as an adulterer towards God:


"Go, take yourself a wife of harlotry And children of harlotry, For the land has committed great harlotry By departing from the LORD." (Hos. 1:2)

In the New Testament, Jesus is referred to as the groom and the church is the bride. Thus to depart from worshiping Jesus, to turn away towards a false god, is adultery.

In the spiritual sense, to steal means to steal what belongs to God and treat it as belonging to one's self.  Thus, those who teach a false religion and lead others astray are stealing from God. Those who place any Divinity in themselves are also stealing from God. And those who are self-righteous, and regard any good that they do as originating from their self, also steal from God. We should act from our self, but acknowledge that all love and truth originate from God. We are mere recipients and vessels of what we receive from the Divine.

To not take God's name in vain in general means not to profane what is holy.  It also means to first belong to the church, acknowledging the truth, and then to turn back and deny it. This is taking God's name in vain, and the act of departure or denial after first acknowledging the spiritual matters of faith is one of the worst things one can do. Thus the correspondence between the third commandment, and the ninth is obvious, for the ninth commandment tells us not to lie or bear false witness. In the spiritual sense, the ninth commandment means we should be true witnesses to our faith by acknowledging it in our life. To say one thing, and do another, is bearing false witness.

The parallel between the fourth commandment, remembering the Sabbath, and the tenth, do not covet, is not obvious and requires a bit of explanation.

The command of not to covet is usually taken as meaning as to not be greedy, or desire what other's have. In a more spiritual sense, it covers all the commandments, and teaches that not only should we not disobey the commandments, but should not desire to disobey them. Thus one who hates another is guilty of killing that person. One who desires another person's wife has committed adultery with her in his heart. If you withhold something that would be of use to others, or help them in some way, you have stolen from them. So in a general spiritual sense, do not covet means we should put our internal desires under submission. Every act will first begin with the thought to do it.

In the spiritual sense, the day of the Sabbath represents a state of spiritual rest, which is preceded by six days of work which represents a state of combat against temptation to do sin. This is discussed in extensive detail by Emanuel Swedenborg in his work, Heavenly Arcana, and I have discussed some other symbolism in the seven days of creation in previous blog posts under the label "Universal Order of Design" which one can see in the left column of this blog. The Sabbath represents a spiritual state where one is led by the Lord in everything, rather than by the self. This interpretation is not so apparent in the literal sense of the Bible, but notice how the spiritual interpretation of the Sabbath as revealed to Swedenborg corresponds perfectly with the tenth commandment, which teaches us that we should subdue our selfish desires.


THE TRINITY AS FOUND IN THE TEN COMMANDMENTS

Most Christian churches have been corrupted by a false definition dividing God into three persons, a definition that is explicitly forbidden and not supported by scripture.  It is a false conclusion that Christian theologians attempt to support by the vision of John the Baptist at the time of the baptism of Jesus, and they will also always point to the fact that Jesus prayed to the Father as to another person. But the hidden reason for that is Jehovah had descended into a human vessel that had inherited sinful tendencies from the human mother Mary, and in such a state had entered a state of being where He could be tempted as any other human. Such a state of temptation could not be possible unless he had entered a state of being where he appeared as separate from the Divine itself. He had to grow towards union with the Divine as any other human would, except with the Lord, he achieved a perfect union with the Divine. In the New Church, the Trinity is defined as an emanation of the Divine: the Divine itself, the Divine in the human, and the proceeding Divine in the form of the Holy Spirit. Or to say it in a different way, the Trinity is the soul, body and spirit of Jesus Christ.

He is the image of the invisible God, as Jehovah resided in Jesus as the soul resides in the body. Thus Jesus calls his body a temple. What about the third commandment, how is that related to the Holy Spirit?  To not take God's name in vain means not to blaspheme or profane that which is holy.  Compare it with this statement concerning the Holy Spirit:

So what does this passage mean, why is blasphemy against the Holy Spirit unforgivable? It is when one turns against the spiritual truth after having first acknowledged it. Not only does Swedenborg explains this, but also relates it to the third commandment:

By these words is described the profanation of truth from the Lord ...These are the things which are signified by taking the name of God in vain. That such a state with man cannot be cured, thus cannot be remitted, is signified also by the words which immediately follow, namely, Jehovah will not hold him guiltless that taketh His name in vain, by which is meant that it cannot be remitted. ...By taking the name of God in vain is also signified blaspheming, which is done when those things which are of the Word or of the doctrine of faith, thus which are holy, are regarded with derision and are brought down to what is unclean and earthly, and thus defiled  (Heavenly Arcana, n. 8882).

Thus the third commandment corresponds to the Holy Spirit. The 10 commandments generally describe what not to do first, rather than what to do, for the first step in spiritual development is to remove what is evil and what is false.  Inasmuch what is evil and false is removed, one prepares oneself to receive the Divine from within. 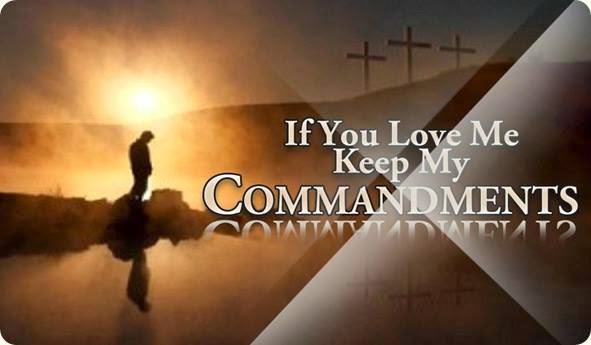