The Secret of Marian Apparitions, and Tolkien's Mirror of Galadriel

Religion, in its many forms, is often best understood as an adaptation of the truth to the mind of the culture of the persons receiving it.  For there are many truths, and adaptations of it, but the ultimate goal of truth is to lead us to that which is good.  Some, who are not ready to receive the higher truth of worshiping one God in human form, will often follow saints, ancestors, or even angels. I had discussed some angelic apparitions in Egypt, and although the apparitions in these cases did not speak, there are other Marian apparitions that can be found in the 19th and 20th centuries where the angel does communicate, sometimes identifying herself as Mary.  Among some Catholic visionaries, I have read accounts where this angelic being will often declare herself to be the "Mediatrix" of salvation, or sometimes as the "Queen of heaven." These revelations, improperly understood, goes against scripture which state that only one God should be worshiped, and prayers should be only directed to him. Are these revelations valid? Yes and no. They are an adaptation of the truth according to how Catholics can receive it. For many millions of Catholics have been taught from childhood to pray to the virgin Mary. I would call these visionary experiences an adaptation of the truth, according to what the mind is willing to receive. If understood symbolically, they are true, but if taken literally, they are false.

Although direct communication with angels and spirits is not generally permitted in this age, in ancient times it was more commonplace when mankind had not fallen into its state as of now. But among religious devotees, who have withdrawn from the cares of the world and dedicated themselves toward charity, it is occasionally permitted.  Swedenborg talks about this briefly in his work, Heaven and Hell:


Some, also, who lead a solitary life, at times hear spirits speaking with them, and without danger; but the spirits with them are at intervals removed by the Lord, lest they should know that they are with man. For, most spirits do not know that there is any other world than that in which they are, and so do not know that there are men elsewhere; accordingly it is not permitted man to speak in turn with them, for if he should they would know it. Those who think much on religious subjects, and are so intent upon them as to see them as it were inwardly in themselves, begin also to hear spirits speaking with them; for religious persuasions, whatever they are, when man from himself dwells upon them, and does not modify them by the various things of use in the world, go interiorly and dwell there and occupy the whole spirit of the man, thus entering the spiritual world and affecting spirits there. But such persons are visionaries and enthusiasts, and whatever spirits they hear they believe to be the Holy Spirit, when in fact they are enthusiastic spirits. Those who are such see falsities as truths, and because they see them, they persuade themselves, and likewise persuade those with whom they flow in; and because those spirits began also to persuade to evils and to be obeyed, by degrees they were removed. Enthusiastic spirits are distinguished from other spirits by this, that they believe themselves to be the Holy Spirit and what they say to be Divine. Those spirits do not maltreat man, because man honors them with Divine worship. I have spoken with them several times, and then the wicked things were discovered which they infused into their worshippers. (Heaven and Hell, n. 249).

This description of a certain class of spirit or angel, who desire to be honored or worshiped by man, sounds very similar to some (not all) of the Marian apparitions I have read about, where the angel encourages devotion to Mary, in addition to emphasizing prayer and repentance. The angelic apparitions in Egypt do not seem to follow the pattern, for the angel always draws attention to the cross and bows down before it. But in certain ancient cultures spirit worship was commonplace, for that is how the culture was taught and that is the only way they could receive the truth. Swedenborg was shown that such a female spirit would often appear to the Greek philosopher Aristotle:


He also said that he believed in one God only, Whose attributes and qualities they distinguished by names, which others worshipped as so many gods. There appeared to me a woman who stretched out her hand, desiring to stroke my cheek, and when I wondered at this, he said that when he was in the world, such a woman had often appeared to him, as if stroking his cheek, and with a beautiful hand. The angelic spirits said that such women sometimes appeared to the ancients, and were by them called Pallases, and that she appeared to him from the spirits who, when they lived as men in ancient times, were delighted with ideas, and indulged in thoughts, but without philosophy; and because such spirits were with him and were delighted with him, because he thought interiorly, they presented such a woman representatively. (Earths in the Universe, n. 39)

Presumably the reference here is to "Pallas Athena," an epithet of the Greek goddess Athena. These visions are different from the Marian apparitions as it is understood that they are visionary representations of the delight of wisdom. But in ancient cultures, this was perhaps the origin of mother goddess worship, and within the Roman Catholic Church, this was gradually changed towards devotions to Mary.

As to why certain Marian apparitions are allowed among Catholic visionaries, Swedenborg describes one culture he encountered, and explains why it was permitted for them to communicate with an angel:


After we had spoken for some time on various matters, I asked what God they worshipped. They said that they worshipped an Angel, who appears to them as a Divine Man, shining with light; and that He instructs them and gives them to perceive what they ought to do. They said further that they know that the Most High God is in the Sun of the angelic heaven; and that He appears to their Angel, and not to themselves; and that He is too great for them to dare to adore Him. The Angel whom they worshipped was an angelic society, to which it was given by the Lord to preside over them, and to teach the way of what is just and right. They therefore have light from a certain flame, which appears like a small torch, quite fiery and yellow. The cause of it is their not adoring the Lord, and thus not having light from the Sun of the angelic heaven, but from an angelic society. (Earths in the Universe, n. 130)

In other words, since the society felt they could not and should not approach God directly, an angel was given to them to teach them the way.  Such is the case with certain Marian apparitions: these visions are allowed as they are willing to receive that kind of truth, as they have been taught from childhood to pray to Mary.  But in the original Christian revelation, direct access to God is now provided through Jesus Christ, thus prayers should be devoted to Him only, as He is God incarnate. 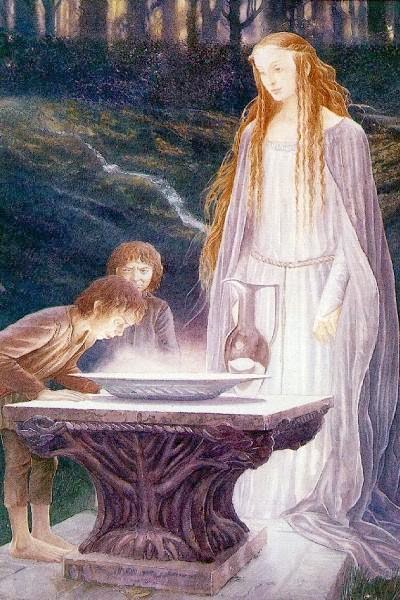 J.R.R. Tolkien was raised in the Catholic faith, and some have wondered if that in any way influenced him in his portrayal of the elf queen Galadriel. Indeed that is the case, which is shown in the private letters of Tolkien. From Tolkien and Mary:


[Father Robert Murray, grandson of Sir James Murray (the founder of the Oxford English Dictionary) and a close friend of the Tolkien family, had read part of The Lord of the Rings in galley-proofs and typescript, and had, at Tolkien's instigation, sent comments and criticism. He wrote that the book left him with a strong sense of 'a positive compatibility with the order of Grace', and compared the image of Galadriel to that of the Virgin Mary. He doubted whether many critics would be able to make much of the book--"they will not have a pigeon-hole neatly labeled for it."]

To which Tolkien gave this interesting response:


I think I know exactly what you mean by the order of Grace; and of course by your references to Our Lady, upon which all my own small perception of beauty both in majesty and simplicity is founded. The Lord of the Rings is of course a fundamentally religious and Catholic work; unconsciously so at first, but consciously in the revision. That is why I have not put in, or have cut out, practically all references to anything like 'religion', to cults or practices, in the imaginary world. For the religious element is absorbed into the story and the symbolism. However, that is very clumsily put, and sounds more self-important than I feel. For as a matter of fact, I have consciously planned very little; and should chiefly be grateful for having been brought up (since I was eight) in a Faith that has nourished me and taught me all the little that I know; and that I owe to my mother...

Tolkien drew upon many sources, but one of the sources of his inspiration, which he does not talk about so much, were his own dreams.  Which is why the first revision of Lord of the Rings was developed "unconsciously" at first as he explains in the above letter. At times he talks about as if he himself had entered the mysterious world of the Faerie. Thus it is full of symbolism. But this identification of Galadriel with the virgin Mary I find interesting.  Why so?  Galadriel was exiled from her homeland due to her pride. In Tolkien's Lord of the Rings, there is this one particular scene, the mirror of Galadriel:

The one ring, with all its power, as a chain around Frodo's neck, represents the love of self - selfish pride - which we all carry. The quest we all have in this life is to destroy and subdue it. But what I find interesting in the above scene is that Tolkien seems to have a particular insight about the Marian apparitions - if Galadriel represents the virgin Mary, why show her in such a negative light - tempted towards power, tempted to receiving worship? The scene reminds me of Swedenborg's description of "enthusiastic" spirits who appear to religious devotees, and desire to be worshiped by them. Did Tolkien know of Swedenborg? That I doubt, I have seen no evidence of that in the letters of Tolkien. That angelic societies of heaven are not perfect, is shown in scripture:


Behold, he put no trust in his servants; and his angels he charged with folly (Job 4:18)

And indeed, Swedenborg saw that in the afterlife - although angels are indeed in a higher state of being than us, all are still developing towards perfection. At times they are given to play a particular role, in order to lead those who are in a lower state of being to a better understanding of the Divine. 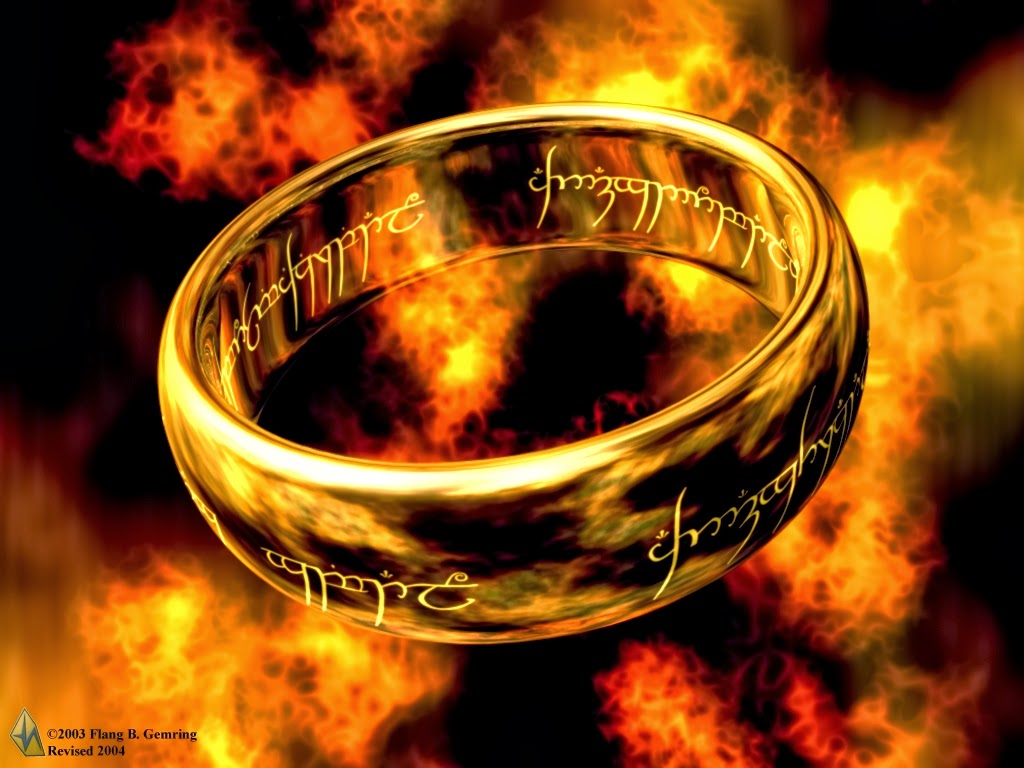 Email ThisBlogThis!Share to TwitterShare to FacebookShare to Pinterest
Labels: Lord of the Rings, Marian Apparitions, Swedenborg