A Prophecy against Turkey 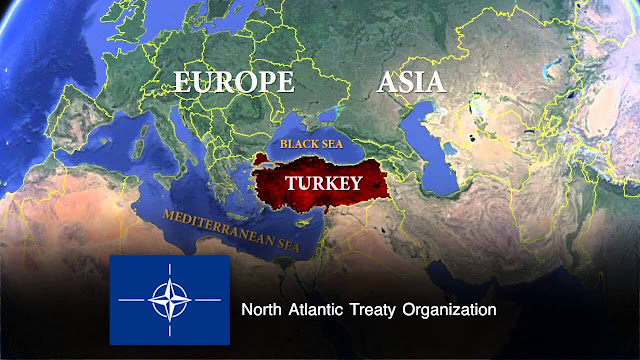 Turkey, a member of NATO, and once a model democracy in the Muslim world, is now in a downward spiral towards an authoritarian government and becoming increasingly intolerant towards its Kurdish minority population.  It has unjustly supported a war against Syria prolonging the civil war, and Erdogan and his government has been secretly supporting ISIS by buying illegal shipments of oil.  Moreover, U.S. intelligence and military is well aware of this, and for several years carried on a bogus air campaign hitting non-essential targets.  All of this came to an end when Russia intervened and bombed all the oil shipments entering Turkey from the Syrian border.  During the time Turkey was financially supporting ISIS with payments for oil shipments, ISIS was slaughtering weak minorities throughout its territories, and wiping out ancient Christian communities of the Middle East.  And all of this is the result of U.S. foreign policy to keep the Middle East an area of instability.

The rise of ISIS and radical terrorism, spreading from the Middle East into Europe, was foreseen in a very unusual prophetic vision given during a Near Death Experience.  For this, see A Prophecy of September 11, Fanatical Terrorism (ISIS), Russia and America.  Here is the relevant prophecy that concerns ISIS:

So what about Turkey, and its attempt to overthrow the government of Assad, and its secret support for ISIS?  Here I want to point to the prophecies of Anton Johansson, a Swedish prophet who saw the sinking of the Titanic, and predicted both World War I and World War II in visions he had of Jesus (see Prophecies of a Future War with Russia).  Here is what he had to say about Turkey:


As for Turkey, I want to warn its citizens not to persecute Christians, but to become devoted to Jesus lest they get effaced from among the number of independent countries. The Jews will at that time have returned in great crowds to Jerusalem.

Turkey, unfortunately, has been following a policy of not protecting Christians, but rather secretly supporting ISIS who had wiped out ancient Christian communities in the Middle East, forcing them to flee.  It also waged war against Assad, who also was protecting Christian communities in Syria.  And the U.S. refuses to negotiate, insisting Assad must go - which of course leaves a power vacuum for yet another destabilized state, similar to Iraq and Libya.  Recently Erdogan took over Christian churches in south east Turkey declaring them state property (see Islamist Turkey seizes ALL Christian churches in city and declares them 'state property').  To make matters worse, Turkey continues to be in complete denial over the Armenian genocide in which they wiped up to 1.5 million Armenians, many of them Christian (see Armenian Genocide).  The historical evidence for that is just simply undeniable.

It is sad to see Turkey moving in this direction, I personally have a love for all things Turkish.  They were once a balancing force in the Middle East, now they are a source of instability.  I always wondered how the prophecy of Anton Johansson would be played out:  I want to warn its citizens not to persecute Christians, but to become devoted to Jesus lest they get effaced from among the number of independent countries.  I often wondered, how could Turkey cease to be an independent country?  Perhaps it will be self inflicted.  The Turkish president had decided to reignite its war with its vast Kurdish minority in the south-east, and this is just asking for a disaster.  Israel and the U.S. would like to see Iraq partitioned into three states - Shiite, Sunni, and Kurds.  The Kurds have been a major ground force against ISIS.  And it looks like Russia may ally with the Kurds as well, especially those in Syria - see Russia’s Kurdish Gambit: US Ally in Syria Takes Moscow’s Side.

So who is Turkey's worst enemy?  It should take a look at itself in the mirror.  Its own fears and selfish ambition will be its downfall.  Perhaps if enough people see the truth, that there will be a change for the better.  Let us pray that it is so.

Serena Shim, American journalist killed in a suspicious car accident in 2014, 2 days after Turkey accused her of spying.  She had also reported that Turkey was smuggling ISIS fighters across the border into Syria.
Posted by Doug Webber at 12:35 AM