Synchronicity and Circles of Seriousness

The movie The Matrix contains a lot of symbolism, some of it prophetic - as explained in A Love Triangle between the CIA, Turkey and Syria. I brought up the prediction of The Matrix concerning the attack on the World Trade Center on Sept. 8 in the blog Saudi Arabia giving Chemical Weapons to Syrian Rebels. The chemical attack was a false flag operation, similar to the false flag operation which appears in the plot to the movie Star Trek Into Darkness. There has been a strange synchronicity going on lately with this blog, something that is a bit hard to explain. Perhaps William Blake summed it up best in the following words:


To see a world in a grain of sand,
And a heaven in a wild flower,
Hold infinity in the palm of your hand,
And eternity in an hour. 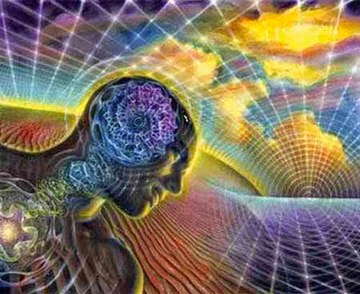 The universe is always reflecting an image of itself - where each and every minutest part is a reflection of the whole. Synchronicity and prophecy is something science cannot explain - it only makes sense if there is a spiritual world interacting with the material world. The material world is a symbolic representation of higher spiritual levels - this symbolism is something Emanuel Swedenborg called "correspondence" where a material object is a representation of something more spiritual. It is an idea that pervades the entire thought of the theology of the New Church, where behind the literal sense of the Word one can see the revelations of the internal spiritual truths of heaven. This concept can be mathematically represented by a fractal, or in physics by a hologram - where the smallest part is a reflection of the whole. The book The Holographic Universe: The Revolutionary Theory of Reality by Michael Talbot uses the hologram to explain this ancient way of thinking in modern terms. Here is a review of the book:


Author Talbot writes that ". . . there is evidence to suggest that our world and everything in it. . . are also only ghostly images, projections from a level of reality so beyond our own it is literally beyond both space and time." Hence, the title of his book. Beginning with the work of physicist David Bohm and neurophysiologist Karl Pribram, both of whom independently arrived at holographic theories or models of the universe, Talbot explains in clear terms the theory and physics of holography and its application, both in science and in explanation of the paranormal and psychic. His theory of reality accommodates this latest thinking in physics as well as many unresolved mind-body questions. This well-written and fascinating study is recommended for science collections.
- Hilary D. Burton, Lawrence Livermore National Lab., Livermore, Cal.

So what is the Matrix? Some things can only be explained symbolically, or in the form of a parable. Some may be wondering just what exactly what kind of job do I do. Agents represent our perceived fears in life. The following video explains it in detail:

Now there are other matters I could explain concerning the symbolism of The Matrix, but some things can only be explained if one is within the circle of trust:

As for Jack - we shall call him Jack - he is a tough guy, very strict and professional, but he has some emotional issue about his mother. He has a bit of trouble expressing his feelings through poetry (the below clip may repeat so you have to pause it):

As for recent events, here is the assessment of what happened according to the CIA: