THE SYMBOLISM OF THE ANIMAL KINGDOM

I have been blogging about the seven planes of known existence, as initially proposed by Athur M. Young in his book, The Reflexive Universe.  There were several gaps in the theory, and I have been trying to fill in some of those gaps with our current scientific knowledge.  With the world of plants, I discovered that traditional taxonomies are shifting due to current research in molecular phylogenetics.  And the case is no different with animals - the field is in flux, and the tendency has been moving towards genetic information, rather than form and function.  With the animal kingdom, we can see a gradual growth towards the human form. When discussing the animal kingdom, Emanuel Swedenborg makes a statement where he anticipated the theory of evolution which became dominant a century later:


The forms of the animal kingdom, which are called in a single word, animals, are all in accord with the flow of spiritual substances and forces; and from the conatus that is in these forms this flow tends to the human form, and to each and all things of it from head to heel; thus it tends in general to produce the organs of sense and the organs of motion, also the organs of nutrition and the organs of prolification. For this reason the entire heaven is in such a form, and all angels and spirits are such a form, and men on the earth are in such a form, and all beasts, birds, and fishes, for all these have like organs. This animal form derives its conatus to such things from the First from whom all things are, who is God, because He is Man. (Apocalypse Explained, n. 1208)


1. Paramecea (one-celled animals).
2. Metazoa (many-celled animals) - Sponges
3. Coelenterates (one organ animals) - having identity, or a center, or inside and out
4. Mollusks (many organ animals). Many filae were put together for this one.
5. Annelids (segmentation)
6. Arthropods (side segments, or legs) - all insects, crabs, lobsters, shrimp. Increased legs, until finally down to six. Highly developed instincts. Exoskeleton.
7. Chordata, or vertebrates. Nerve cord.

Each time we go up a level of order, the complexity increases by orders of magnitude.  As with plants, lets take a look at these seven levels of animals.  Again, this is a bit difficult as taxonomic terminology keeps changing. But two things distinguish animals from plants: first, animals need to eat food instead of converting light energy, and secondly, they have their own mobility.

Unicellular Eukaryotic organisms that are animal-like are (were) generically known as Protozoans, and unicellular Eukaryotic plants are (were) generically known as Protophyta. These are older divisions and these terms are not used in modern taxonomies.  Young referred to Paramecium, which is a genus that belongs to the Protist kingdom. Unicellular Eukaryotic organisms that use photosynthesis belong to Algae of the plant kingdom. There seem to be border-line cases: for example, the algae Dinobryon feeds on organic matter and is motile in addition to making use of photosynthesis.

Rather than go through the taxonomic debate currently going on among biologists, I am going to keep this simple, and refer to unicellular eukaryotic animals as Protozoans.  They have their own mobility, and thus may possess hair like organelles called cilia, or a whip-like tail called the flagellum. I am including in this group choanoflaggellates, as well as amoebas which move by cytoplasmic flow.  Here is an image of choanoflagellates: 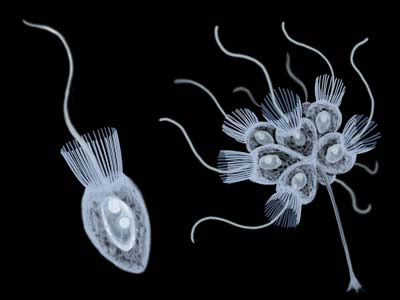 Choanoflagellates consume Bacteria, which is the first stage of the Plant kingdom.

In the second stage we have multicellular animals, but still do not have specialized organs. In this group we have sponges, which belong to the phylum Porifera an the Parazoa subkingdom. I had mistakenly thought they belong to plants, but not so: they belong to the animal kingdom. Included in this we may or may not include the Placozoa phylum. The Choanoflagellates were key in the eventual evolution of sponges. From a science blog article Choanoflagellates to sponges to metazoa:


It seems that some one-celled animals with flagella, called choanoflagellates, became involved in sponge development. They resemble the choanocytes of sponges, which line the sponges’ inner passages and fan their flagellae to move sea water and food particles. With their stickiness or adhesion molecules, choanocytes aided the eventual transition to multi-cellular organisms, or metazoans.

Here is an image where we see Choanoflagellate-like cells (choanocytes) can be seen in the wall of a sponge:

And from that, we get this: 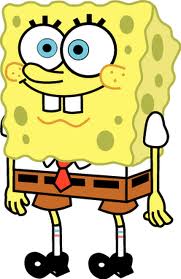 Not quite, here is an actual image of some sponges: 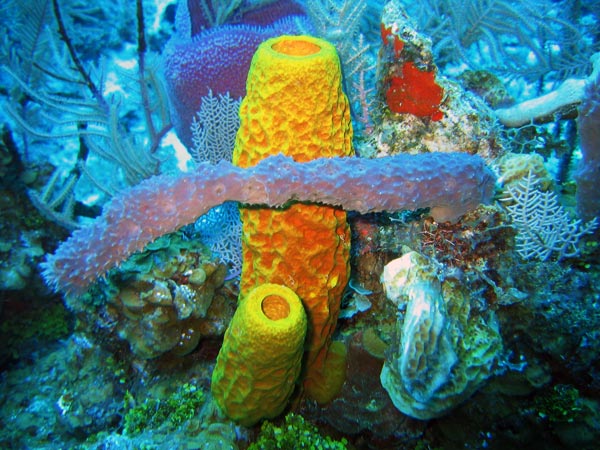 It should be noted that some sponges have become carniverous and have lost their choanocytes.

If we look at Coelenterates, in modern biological taxonomy Coelentera is an obsolete term which covered two phyla: Ctenophora (comb jellies) and Cnidaria (coral animals, true jellies, sea anemones, sea pens...).  Both of these belong to the Subkingdom Eumetazoa, and are classified as "Radiata". Radiata are radially symmetric animals. Here is a Wikipedia entry explaining the difference between Sponges and Radiata:


Like cnidarians (jellyfish, etc.) and ctenophores (comb jellies), and unlike all other known metazoans, sponges' bodies consist of a non-living jelly-like mass sandwiched between two main layers of cells. Cnidarians and ctenophores have simple nervous systems, and their cell layers are bound by internal connections and by being mounted on a basement membrane (thin fibrous mat, also known as "basal lamina"). Sponges have no nervous systems, their middle jelly-like layers have large and varied populations of cells, and some types of cell in their outer layers may move into the middle layer and change their functions.

Here is a table showing the differences:

Cnidaria and Ctenophores rely on water flow through a body captivity for digestion and respiration. Both have specialized cells for capturing prey.  Their nervous system is decentralized with no brain. Unlike sponges, they can freely swim throughout the water.

Here is a diagram showing the Parazoa branch (the Sponges) and the Radiata: 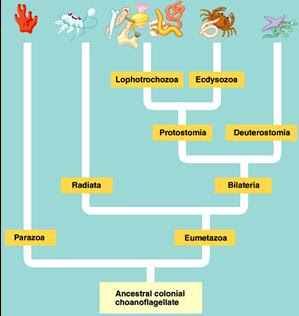 
This following figure is a modification of the summaries of Giribet et al. (2007) and Valentine (2004) in which the Animal Kingdom is monophyletic and forms four major clades: the CHOANOFLAGELLATES (CHOANOZOA), PARAZOA (Clade 2), RADIATA (Clade 4), and BILATERIA (Clade 5).   Here, the Bilateria is separated into the Deuterostomata (Clade 6) and the Protostomata (Clade 7).  The Protostomes are further divided into the Ecdysozoa (Clade 8), the Platyzoa (Clade 10), and the Lophotrochozoa (Clade 11). 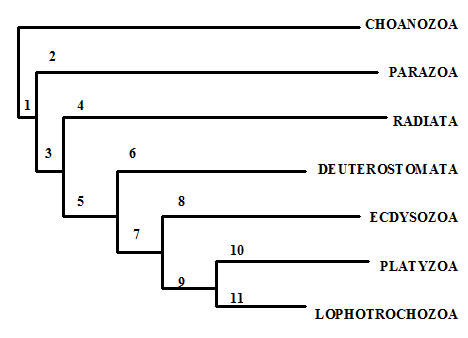 If we look to the right, there are seven main categories of the animal kingdom! Stage 1 is the Choanozoa, Stage 2 is the Parazoa, and we are now on Stage 3, the Radiata. Each time, there is a division.  Here is a description of the numbers:

Clade 1: The Metazoa: Development from a blastula.  Simple life history with gametic meiosis.
Clade 2: The Parazoa at the tissue-level of organization.
Clade 3: Organisms at the organ-level of organization with determinate development and 2-3 tissue layers.
Clade 4: The Radiata; diploblastic, usually with radial symmetry.
Clade 5: The Bilateria; triploblastic, usually bilaterally symmetrical.  Animal develops from a gastrula that forms a gut, mesoderm, and body cavity.
Clade 6: The Deuterostomes; the blastopore becomes the anus.
Clade 7: The Protostomes; the blastopore becomes the mouth.
Clade 8: The Ecdysozoa; the molting animals.
Clade 9: The Spiralia; the protostomes with spiral cleavage.
Clade 10: The Platyzoa; mostly animals in which the blastocoel becomes the body cavity, a pseudocoelom.
Clade 11: The Lophotrochozoa: animals that have a trochophore larva, some of which bear lophophores.


So this is interesting! It seems to be based on relatively recent research, and I just found this while writing this  blog. Instead of following Young, lets follow the above system for the rest of the stages and see what we find.

I have no idea what this is, so I will quote from Wikipedia:

Superphylum Deuterostomia was redefined in 1995 based on molecular sequence analyses when the lophophorates were removed from it and combined with other protostome animals to form superphylum Lophotrochozoa.


Ok, this is now diverging from what Young stated.  Deuterostomes is where the blastospor becomes the anus. Here is a diagram showing that cell development: 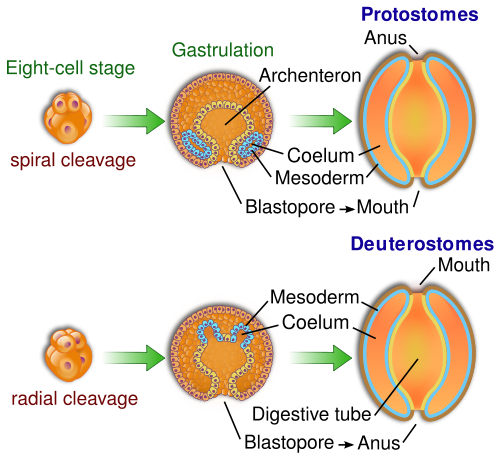 The Chordata, or vertebrates, Young put in the seventh stage. And this superphylum of Deuterostomes is grouping some worms with the Chordata.  Humans grouped with certain worms?  That is definitely not what I was expecting.  It reminds me of these verses:

Fear not, you worm Jacob, You men of Israel! I will help you, says the LORD And your Redeemer, the Holy One of Israel. (Isa. 41:14)

And they shall go forth and look upon the corpses of the men who have transgressed against Me. For their worm does not die, And their fire is not quenched. They shall be an abhorrence to all flesh. (Isa. 66:24)


And all this time I thought "worm" was only figurative.

What is this?  I will quote from Wikipedia:

Ecdysozoa is a group of protostome animals, including Arthropoda (insects, chelicerata, crustaceans, and myriapods), Nematoda, and several smaller phyla. They were first defined by Aguinaldo et al. in 1997, based mainly on trees constructed using 18S ribosomal RNA genes. A large study in 2008 by Dunn et al. strongly supported the Ecdysozoa as a clade, that is, a group consisting of a common ancestor and all its descendants. The group is also supported by morphological characters, and can be considered as including all animals that shed their exoskeleton (see ecdysis). Groups corresponding roughly to the Ecdysozoa had been proposed previously by Perrier in 1897 and Seurat in 1920 based on morphology alone.

So, it would seem that molecular phylogenetics is becoming a nice complement to taxonomy based on earlier morphological studies. Still, this category is contested by a strong minority of biologists. The Arthropoda were classified by Young as the sixth stage of development for animals.

This category is relatively new, proposed by Thomas Cavalier-Smith in 1998. It includes the following traditional phylums: 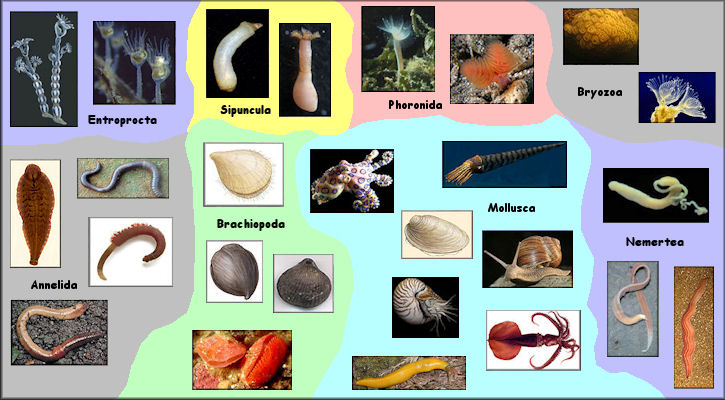 THE SEVEN STAGES OF THE ANIMAL KINGDOM

Here is a chart showing taxonomic classification, the first based on morphology, the second based on molecular phylogeny: 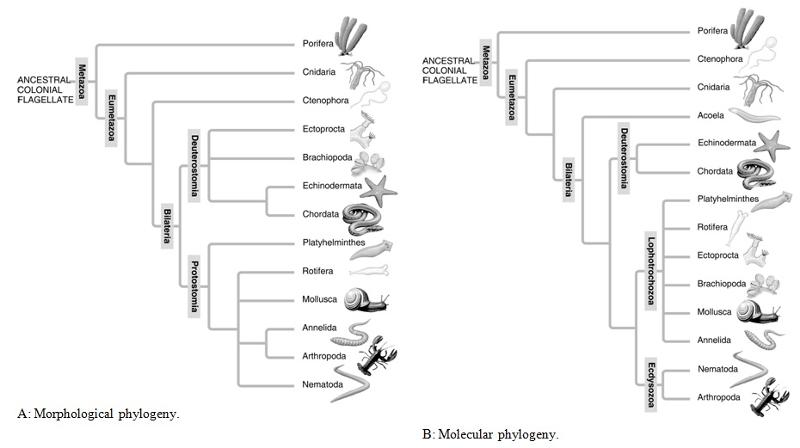 Here is another chart of animal phylogeny: 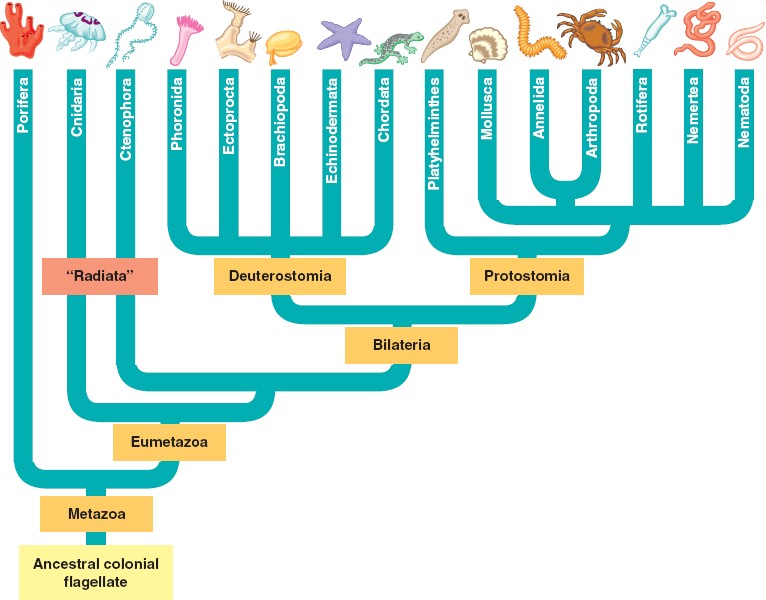 The most interesting diagram was the one I stumbled upon later, showing the clades of the animal kingdom:

From the above information, it would seem that Young did not have enough information to form the classifications of the animal kingdom: his classifications for stages 4 and 5 are invalid, and not recognized in biology.  But, there is a pattern of seven stages of development in the animal clades as currently recognized by modern molecular phylogeny, which has refined our knowledge based on earlier morphological studies.  So, based on the above, we can divide the animal kingdom into seven stages:

If we look at the diagram above of the animal clades, and flip the order of platyzoa with Lophotrochozoa, we end up with this numbering pattern for the seven stages: 1, 2, 3, 7, 6, 5, 4.  In other words, it can be represented by the Jewish candelebrum: 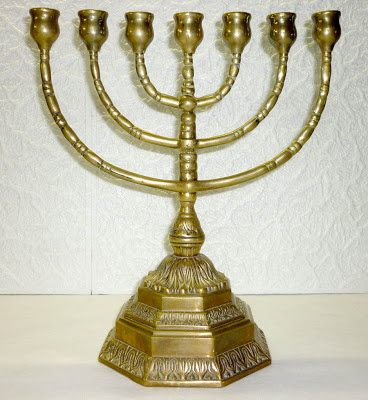 Wow, I certainly was not expecting that pattern! This candelebrum was placed in the Jewish temple, in the section that preceded the Holy of Holies. It also symbolizes the seven types of churches which will be present in the latter age, described in the Apocalypse. The Holy of Holies was hidden behind a veil - just as the seventh stage of existence is hidden to us - which represents the final state of existence, the spiritual world, which we become aware of when we transition away from the animal kingdom at the time of death, and move towards becoming angels.
Posted by Doug Webber at 3:38 PM