David and Saul, and the music of Heaven

It is well known that David represents the Lord, as there are many prophecies which speak of the Messiah as the son of David. They both came from Bethlehem. David is anointed by Samuel to become the next king of Israel, and soon after Saul becomes troubled and depressed:


But the Spirit of the LORD departed from Saul, and a distressing spirit from the LORD troubled him.And Saul's servants said to him, "Surely, a distressing spirit from God is troubling you.Let our master now command your servants, who are before you, to seek out a man who is a skillful player on the harp. And it shall be that he will play it with his hand when the distressing spirit from God is upon you, and you shall be well."So Saul said to his servants, "Provide me now a man who can play well, and bring him to me."Then one of the servants answered and said, "Look, I have seen a son of Jesse the Bethlehemite, who is skillful in playing, a mighty man of valor, a man of war, prudent in speech, and a handsome person; and the LORD is with him."Therefore Saul sent messengers to Jesse, and said, "Send me your son David, who is with the sheep."And Jesse took a donkey loaded with bread, a skin of wine, and a young goat, and sent them by his son David to Saul.So David came to Saul and stood before him. And he loved him greatly, and he became his armorbearer.Then Saul sent to Jesse, saying, "Please let David stand before me, for he has found favor in my sight."And so it was, whenever the spirit from God was upon Saul, that David would take a harp and play it with his hand. Then Saul would become refreshed and well, and the distressing spirit would depart from him. (1 Sam. 16:14-23)

When Saul is mentioned in the context of David, what he represents changes a bit. Saul of the tribe of Benjamin was a foreshadowing of Saul (Paul) the apostle.  In another level of meaning, Saul also represents the worship of the Jewish Pharisees before the coming of the Lord, as Saul was also a Jewish Pharisee before he converted to Christianity.  In the revelations of the Heavenly Arcana, the spiritual progression of Jesus is described as He grew as a human, beginning with the initial natural state, then reaching a spiritual state, before reaching the final celestial state.  The struggle between Saul and David over the throne represents Jesus' own spiritual struggle in overcoming and subduing the evils in His own natural man which He inherited from His human mother Mary. This is somewhat represented in His conflict with the Pharisees in the Gospels. Jesus was Jehovah in human form, and the way the Lord redeemed humanity from hell was first by redeeming His own human by overcoming all evil temptations. It is the Lord's spirit which helps us from within when we try to resist our own temptations. Thus in John He says, And for their sakes I sanctify Myself, that they also may be sanctified by the truth. (John 17:19)

That Saul the Pharisee who persecuted the early Christians represents this, is shown by the first words Jesus says to him when Saul is confronted with Jesus in a blinding vision:

I always thought this was a very interesting statement. Although Saul was persecuting other Christians, Jesus asks him why is Saul persecuting him. Which goes to show, although this is quite hidden, Jesus lives inside our heart when we follow him and live according to His commandments. It also shows that Saul represents the Jewish Pharisees who persecuted Jesus while He was alive, and in a higher sense, Saul represents the initial natural state Jesus was born into, which He had to sanctify due to the sinful nature His natural body inherited from Mary.

Samuel's anointing of David represents Jesus's spiritual state when He is anointed by the Holy Spirit. The departure of God's spirit from Saul, and David becoming Saul's armorbearer and playing the harp to drive out an evil spirit, represents how at this time Jesus entered into direct warfare with the spirits of hell. Thus after Jesus is baptized, He enters into the wilderness for 40 days to be tempted by the devil. It is from this point on that Jesus progresses to the point where He is able to drive out evil spirits from other men and women. Swedenborg states that Jesus endured temptations of the worst possible kind, which no other human experienced. For the greater the Love, the greater the temptation, for that Love will be opposed by hell. And the Lord's love was the greatest of all, as He had love to save the entire human race.


THE MUSIC OF THE HEAVENS

It was well known since ancient times that music can provide spiritual relaxation for the soul.  David made use of the harp to compose many of the Psalms:


Then David and all the house of Israel played music before the LORD on all kinds of instruments of fir wood, on harps, on stringed instruments, on tambourines, on sistrums, and on cymbals. (2 Sam. 6:5)

One time my grandfather came very close to death, his heart stopped, but the doctors were able to revive them. He was a composer and musician, and as he slipped away he began to hear the most beautiful and peaceful music he ever heard in his life. When he came to, he was actually upset with the doctors for reviving him.  Those remaining years he had to suffer much due to cancer. I always wondered about that music...where was that coming from? 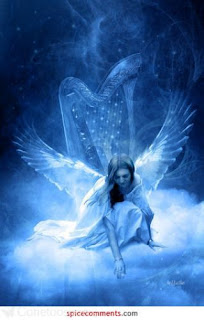 Swedenborg stated that stringed instruments represent the spiritual affection for faith, while percussion and wind instruments such as the drum and trumpet represent the affections of the heart and will. He also states "Harpers ...stand for truths, and trumpeters for goods of faith." (Heavenly Arcana, n. 424) In the heavenly visions of Swedenborg, he describes some of the heavenly choirs:


That singing and its like signifies what is spiritual has also been evident to me from angelic choirs, which are of two kinds, celestial and spiritual. Spiritual choirs, from their vibratory singing tone, to which the sound of stringed instruments can be compared, are very different from the celestial — of which by the Divine mercy of the Lord hereafter. And furthermore, the most ancient people referred what was celestial to the province of the heart, and what was spiritual to that of the lungs; thus they ascribed something spiritual to whatever is of the lungs, as is the singing voice and its like, and so to the voice or tone of such instruments — for the reason, not only that the heart and lungs represent a kind of marriage, as of love and faith, but also that celestial angels belong to the province of the heart, and spiritual angels, to that of the lungs. (Heavenly Arcana, n. 418.2).


It is worthy of mention that angels and spirits distinguish sounds according to differences as to good and truth — not only of songs and instruments, but also of voices; and they admit none but such as are harmonious, so that there shall be concordance of sounds, and consequently of the instruments, with the nature and essence of good and truth. (Heavenly Arcana, n. 420.5).

In other passages, Swedenborg describes how evil spirits suffocate on the approach of the sphere or aura of those of heaven. Thus music has a similar effect. It is said that all things were created by the Word of God - and the latest theory from physicists is that at the smallest level, everything seems to be composed of vibrating strings. The universe is thus the ultimate manifestation of the music of heaven. I was looking for some good harp music to listen, and found a song produced by a couple of twins named Camille and Kennerly. This song is the theme song from the "Game of Thrones", apparently an epic fantasy where nobles struggle with each other in a civil war. A fitting selection, as Saul and David eventually war against each other over the throne of Israel:


Below is the original sound track from "Game of Thrones", showing a king or prince on a throne in a dark mood, similar to Saul.  Looks like an interesting series: