The True Meaning of Father and Son in Christianity 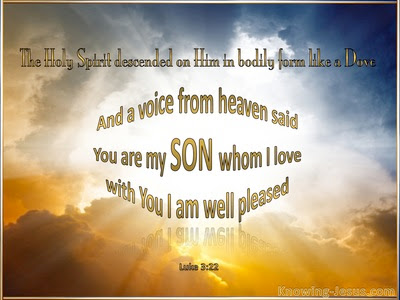 Most people have a fundamental misunderstanding of the Father and Son in Christianity, and conceive of them as two distinct persons.  This is a fundamental mistake of modern Christianity, and it can be traced back to church councils of the 4th century A.D.  But what is the true meaning?  Many reject Christianity as there is a false thought of three persons, and Christian theologians declare they believe in one God when yet in the thought there is three. But let us for the moment forget what is taught to many in the churches, and go back to the time of Jesus Christ. And instead of just blindly following church councils, let us read what scripture tells us.


POINT #1: GOD IS THE FATHER SINCE JESUS WAS BORN OF A VIRGIN

The first point to make is quite a simple one: Jesus called God his father since he was born of a virgin. Pure and simple. There was not concept of three persons of the Godhood, there was only one God whose name is Jehovah or Yahweh.  Jehovah or Yahweh is a personal name for a singular being. There was no concept of a "son born from eternity" as later theologians would invent. Rather, Jesus Christ is the Son of God born in time to the virgin Mary.

God is the father of Jesus Christ, due to the fact that he was born of a virgin, is a fundamental testimony of the gospels. This can be first seen in Gabriel's explanation to Mary as to how she would give birth without having any relations with a man:


Mary asked the angel, “How can this be, since I have not been intimate with a man? ”The angel replied to her: “The Holy Spirit will come upon you, and the power of the Most High will overshadow you. Therefore, the holy One to be born will be called the Son of God. (Luke 1:34-35)

There you have it. Jesus calls God his Father, and he is known as the Son of God, because he was born of a virgin.

POINT #2: THE FATHER-SON RELATIONSHIP DID NOT EXIST UNTIL JESUS WAS BORN

Given that Jesus is the Son of God by virtue of having been born of a virgin, the next point is a corollary conclusion: the Father-Son relationship did not exist until Jesus was born. This can also be derived from the following prophecies:

I will recount the statute, Jehovah has said to me, You are my Son, this day I myself have begotten You. (Ps. 2:7)

This is quoted in Acts 13:33 and Hebrews 1:5 as having been fulfilled by the birth of Jesus Christ. "This day" is to be born in time. This particular passage caused a lot of problems for theologians as they wanted to declare that the Son existed from eternity, which obviously does not fit the phrase "this day" and "begotten."

Besides that, there is another passage is not so well known, which can be found in Psalm 89 which is another Messianic prophecy, the Christ who would be descendant of David:

This was fulfilled when Jesus was born. After that, he most commonly called God his Father. Up until that time the title "Father" was rarely used to reference God in the Old Testament.

POINT #3: THE FATHER DIRECTED EVERYTHING JESUS DID

Truly, truly, I say to you, the Son can do nothing of his own accord, but only what he sees the Father doing. For whatever the Father  does, that the Son does likewise. (John 5:19)

I can do nothing on my own. As I hear, I judge, and my judgment is just, because I seek not my own will but the will of him who sent me. (John 5:30)

POINT #4: THE FATHER IS THE SAME PERSON AS JESUS

So how could the Father direct everything that Jesus did? Because the Father is the same person as Jesus - they are one and the same!  This we know from what Jesus said to Philip, as Philip thought the Father was another person:

There is a lot said in this passage. Philip conceived of the Father as a separate person, and Jesus said he is the Father. Moreover the Father exists inside Jesus - we can say, the Father is to the Son as the soul is to the body. Thus it is the Father within Jesus who does the works that Jesus does. How can two separate entities or beings exist inside each other? They cannot.

That Jesus is the human form of Jehovah, can be seen from the fact that the name Jehovah was pronounced by the Jews as "Lord" or Adonai in Hebrew.  And this is the reason why Jesus is called Lord in the New Testament. Thus Jesus says:

And Thomas declares this to Jesus when he realizes he rose from the dead:

The Father is the invisible God beyond our reach, unseen, but Jesus is the visible human form of God, as He is God incarnate:

No man has seen God at any time; the only begotten Son, who is in the bosom of the Father, he has declared him (John 1:18)

POINT #5: GOD INCARNATE WAS BORN INTO A LOWER STATE

This last point is essential to understand. When God became incarnate in human form, He was born into a lower state, where He had to grow as a human.  Moreover, his human form inherited evil tendencies from his mother Mary.  Thus Jesus could be tempted.  Without being born incarnate the Divine could not be tempted. The difference was, his soul was Divine, it was Jehovah himself, so Jesus could not succumb to the temptations. By becoming incarnate, Jehovah in His human form could fight against all of hell and save humanity by resisting temptations. These temptations could only be possible if God was born as another man into this lower state of humanity. The Catholic Church, in elevating Mary, miss the whole point of the incarnation and diverge from the truth of Christianity, and they really cant explain how salvation was effected. Nor can the Protestants who inherited their theology from the Catholic Church.

And Jesus increased in wisdom and stature, and in favour with God and man. (Luke 2:52)

And thus Jesus declared himself lesser than the Father:

And during his life Jesus wanted to return to his former glory before he was born:

And now, Father, glorify me in your own presence with the glory that I had with you before the world existed. (John 17:5)

And Paul explained this better in how God lowered Himself to become a servant:

Let this mind be in you, which was also in Christ Jesus:Who, being in the form of God, thought it not robbery to be equal with God:But made himself of no reputation, and took upon him the form of a servant, and was made in the likeness of men:And being found in fashion as a man, he humbled himself, and became obedient unto death, even the death of the cross.Wherefore God also hath highly exalted him, and given him a name which is above every name:That at the name of Jesus every knee should bow, of things in heaven, and things in earth, and things under the earth;And that every tongue should confess that Jesus Christ is Lord, to the glory of God the Father. (Phil. 2:5-11)

Jesus became "highly exalted" when the human form he had adopted became transformed into a Divine Human, one that had become completely Divine. From His glorification, His spirit could then flow into all humanity, and we can now all become sons and daughters of God through Jesus Christ. To declare "Jesus Christ is Lord" had a more significant meaning back then: the word Lord, or Adonai, was used as a title of Jehovah. To truly acknowledge Jesus as Lord is to acknowledge Him as Jehovah in human form, and to live by His commandments.

When confronted with a new way of thinking of God incarnate in Jesus Christ, it takes time for people to assess this and questions arise as they assume what they have been told is correct. When I have brought this up before, I have heard the following objections:


To which there are the following answers, summarized:

The end result, when acknowledging one personal being Jehovah who became incarnate in Jesus Christ, there is no longer a question of who one should pray to. All prayers should be directed to Jesus Christ, for no one can approach the Father except through Him.